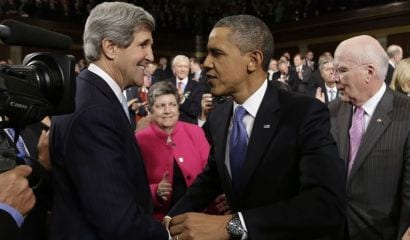 The U.S.-Russian agreement, which is supposed to result in the seizure and disposition of Syria’s chemical weapons, is the crowning achievement of President Obama’s and Secretary of State Kerry’s diplomacy. Their achievements are threefold.

First, they have given New York Times op-ed contributor Vladimir Putin everything he wanted and obtained precisely nothing in return. Second, they have smoke screened public attention from the fact that the whole crisis on Syrian chemical weapons was manufactured from Obama’s cavalier comment that created the so-called “red line.” They’re now praying that people forget that the new agreement removes the threat of American use of military force against Assad and replaces it with the prospect of more UN resolutions placing sanctions on Syria. Third, they have left America’s diplomacy in complete shambles to a degree unseen since the Iranians held American embassy personnel hostage in 1979-80.

If American diplomatic incompetence were a bespoke suit, Russian President Putin would be modeling it for the media in the same manner he’s displaying the new agreement on Syria announced on Saturday. It was tailored for him by Obama and Kerry.

Last Tuesday, President Obama planned to address the nation on the urgent need to strike Syria. But his plans had to change radically when, on the weekend before the speech, Putin announced a possible deal on Syrian chemical weapons to ensure they’d be taken over by Russia. But the kicker was that America had to renounce the use of military force on Syria before Putin’s deal would be valid.

Which flummoxed Obama comprehensively and, for a few crucial hours, left Kerry untethered. On Tuesday, just hours before the big speech, Kerry testified before a House committee and said flatly that Obama wouldn’t ask Congress to delay a vote on authorizing a strike on Syria. But, of course, Obama did exactly that in the Tuesday night speech.

On Wednesday, we were treated to the best “rope-a-dope” since Muhammad Ali fought George Foreman in 1974. In a perfectly written New York Times op-ed, Putin wrote that he felt compelled to address the American people directly. He called for America to respect international law, to submit the Syria mess to the UN Security Council. He worried that we could destroy the UN and international law and order. He wrote that he was alarmed that it had become a commonplace for the U.S. to intervene in foreign conflicts by military force. He even took us to task for American exceptionalism.

All of these words had, over the past few years, come out of Obama, even the criticism of American exceptionalism. Putin is a judo expert. His op-ed was a perfect rope-a-dope because he used Obama’s words to create a momentum in Obama that he used against him.

By Thursday, Kerry was in Geneva negotiating with Russian Foreign Minister Sergei Lavrov. Diplomats often hold intentionally meaningless press conferences in the midst of such meetings. They smile, look forward to “cordial and frank discussions,” and avoid saying anything that might upset anyone.

When he was a senator, John Kerry was famous for long-winded questions to nominees in confirmation hearings. His were second only to Joe Biden’s in length and opacity. On Thursday, with Lavrov, Kerry gave a three-minute harangue that apparently stunned Lavrov.

Talking down to Kerry, Lavrov said, “I’m not prepared with the extended political statement. Diplomacy likes silence.” In Damon Runyon’s words, “Shut up, John, he explained.”

In addition to long-winded questions, Senator Kerry is best remembered for straddling the justification of the Iraq war and voting for the Iraq surge before he voted against it. At one point in his 2004 presidential campaign, he called Bush’s decision to invade Iraq a “failure of diplomacy of a massive scale.” Now America’s chief diplomat, Kerry is failing on a scale unmatched by Bush or any of his Republican predecessors.

As a result of Kerry’s negotiations with Lavrov, we now have another meaningless agreement that the UN will be asked to administer. It calls for Syria to turn over a full accounting of its chemical weapons within a week. But for weeks we have heard what the Wall Street Journal reported on Friday: that Assad has been busy hiding his chemical weapons in dozens of spots. Syria’s chemical arsenal is apparently departing for Lebanon and largely into the hands of Hezbollah terrorists. Assad’s compliance with the agreement is as likely as North Korea’s or Iran’s on any attempt at arms control.

If the UN Security Council adopts the Russian-American agreement by resolution — and given China’s veto, that is nowhere assured — the threat of military force has been removed. Assad’s compliance is assured by the threat of further sanctions by the UN or “other consequences” which are undefined. Putin won, hands down. He got everything he wanted and we got nothing.

At this point, we need to remember just how we got into this mess. In September 2012, Obama spoke casually and carelessly about the Syrian civil war. He said, “We have been very clear to the Assad regime, but also to other players on the ground, that a red line for us is we start seeing a whole bunch of chemical weapons moving around or being utilized. That would change my calculus. That would change my equation.… We’re monitoring that situation very carefully. We have put together a range of contingency plans.”

Chemical weapons moved or used. Red line. Range of contingency plans. Those are words of crisis and war, but Obama spoke them in a manner fit only for a coffee house chat between a college professor and a bunch of sophomores. The statement became the cornerstone for our policy on Syria. When Assad used chemical weapons on August 21, he crossed Obama’s red line brazenly. And Obama — as much as he disliked the idea — had to respond.

And so Obama created the crisis. And he did so in respect to a conflict in which America had no national security interest at stake. Think of how desperately he searched, in his speech last Tuesday night, for words to justify his idea of using military force on Syria. He talked about the need to enforce the global rules against the use of chemical weapons. He said that someday our troops could face chemical weapons on the battlefield. He said that Syrian fighting could destabilize Turkey, Jordan, and Israel. And he said that failure to strike would embolden not just Assad but Iran in its pursuit of nuclear weapons.

Obama wanted us to believe that striking Assad would have the effect of slowing or stopping those events. As clearly as his desperation to prove his case was, it was equally clear that none of the events he chose to justify his case would be slowed or stopped by striking Syria.

Obama has engineered us into a “jobless recovery,” which has failed to create significant economic growth since the 2008 economic disaster. Like his “jobless recovery,” Obama’s diplomacy is nothing short of a new global order that shifts us away from the defense of our allies and strategic interests to an era in which America exercises its military power only where it has nothing at stake in the fates of nations or peoples.

It is truly the diplomacy of dunces.