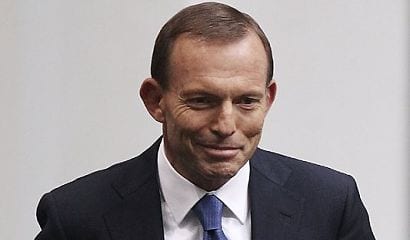 The election of Tony Abbott as Prime Minister of Australia, destroying the incumbent center-left Labor Government by a thumping majority (his party, confusingly for some in the U.S., is called the Liberal Party) should be a lesson for conservatives around the world.

One not-untypical commentator, Bernard Keane, claimed, on Abbott taking the leadership by a single vote in 2009: “Abbott will reduce the party to a reactionary rump struggling to accept the 20th, let alone the 21st, century.”

Lefty journalist Laura Tingle claimed in the same year: “The election of Tony Abbott [as party leader] is a disaster of epic proportions for a party that was already up against it in the race to remain competitive at the next election. They have now taken a major step to the Right, towards their base, and away from mainstream voters.” Another, Peter Hartcher, claimed: “The Liberal Party has decided that it’s more important to be combative than to be electable.”

A comprehensive digest of such pronouncements would fill several pages. The fact is, the left have been desperate to stop Abbott because they are afraid of him. Not only is he a first-class intellect, but unlike many in his party, he understands the importance of the culture war. Further, Abbott’s triumph proves once again that the commentariat of the media elite are simply divorced from the reality that they are meant to report and reflect.

Widely dismissed as “unelectable” and a “troglodyte,” Abbott is a conservatives’ conservative and proud of it. He has proved that a social and political conservative of strong conviction can win and win big. Not only the Labor Party but the further-left Greens saw their vote slashed.

Abbott is cast in the mold of the great conservative leaders — Thatcher, Reagan, and his political mentor and predecessor in Australia John Howard. He is super-fit, a boxer (with an unbroken nose), and a former Rhodes Scholar. Modestly paralleling the young summer lifeguard Ronald Reagan, he saved lives at some risk to his own on two occasions (without staying around to be thanked). He is also, at 55, relatively young. He has studied Law and has been a professional journalist, writing for Australia’s highest-quality publications, including the old Bulletin and the Murdoch-owned National daily, the Australian.

He has never hesitated to espouse causes that send the left into a mouth-frothing rage. He studied for a time at a Catholic seminary, was a leading light in Australians for Constitutional Monarchy (playing a major role in defeating the left-inspired push for a republic), and highly skeptical about global warming and climate change. He resigned from the Liberal front bench in 2009, over then-leader Malcolm Turnbull’s support for Labor’s emissions trading scheme.

He can be expected to undo Labor’s irrational and employment-destroying “carbon tax” and its even crazier tax on mining (mining being Australia’s chief source of wealth). It seems likely that he will rebuild Australia’s dangerously diminished defense forces. He has given notice that he will not increase foreign aid, though it would be better for all parties if he cut it down to nothing but disaster relief.

He is personally opposed to abortion although he did not attempt to ban it when Minister for Health in the Howard Government. A ludicrous attempt to paint him as a misogynist by the previous Labor leader and Prime Minister Julia Gillard was rightly laughed to scorn. He has taken over a disunited and demoralized Liberal Party, unified it, and led it to a crushing victory. As Melanie Phillips put it: “He has faced down the intellectual thuggery and demonization by the Left.”

Although the left have attacked Abbott with a full battery of slanders, including the nickname “The mad monk” and a ludicrous charge that as a student he once punched a wall near a feminist student politician, no one has been able to credibly suggest that he lacks integrity. In the words of Mark Steyn: “We’re not talking about a Cameronesque trimmer and opportunist here.”

As his championship of ACM indicated, Abbott is orientated towards the political values of Churchill and the Anglosphere (Britain, Australia, Canada, and New Zealand all now have leaders to the right of Obama, though in the case of Britain the difference is fairly minuscule). He has proved that he speaks for a very decided majority of Australians.

One of his first mentors was B.A. Santamaria, the lawyer who founded and supported the anti-Communist Democratic Labor Party which wrested a number of key unions out of Communist control in the 1940s and 1950s, kept the Labor Party out of office by directing votes away from it, and supported various anti-Communist movements in Southeast Asia. Association with the DLP meant an education in political infighting and anti-totalitarian politics.

The lesson for the U.S. seems plain: if Mitt Romney had campaigned with Abbott’s conviction and feistiness history might have been a different and better story. The highly paid wisdom of Peter Hartcher et al. notwithstanding, the lesson of the two campaigns of Abbott and Romney may be that for conservatives in Anglomorph countries, to be combative is to be electable.