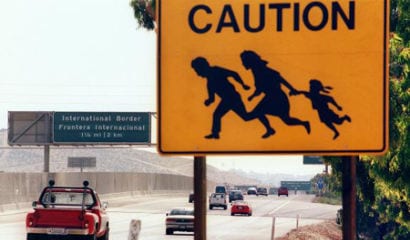 While most of the attention on immigration matters has focused on illegal border crossing by Hispanics, 2011 and 2013 have shown a marked increase in Indian nationals arriving undocumented from South Asia. No explanation has been put forth as to why 2012 was not included in the sharp increase and only recently has any effort been made to discover what has prompted the overall influx.

The administrative system for getting into the United States illegally takes a bit of time, but it’s relatively simple. All that has to be done is show up at the official U.S.-Mexico border crossing and ask for asylum. These “asylum seekers” must convince immigration officials that they have a “credible fear” of exploitation and/or persecution in their home country. This done, the applicants are given notices to appear before an immigration court judge. They are then set free at the local bus station on their way to stay with relatives and friends already in the United States.

Immigration and Customs Enforcement (ICE) officials will insist the process is far more rigorous, but nonetheless the system directed by Department of Homeland Security (DHS) essentially is that simple. Why such a legal device has not been utilized by others is likely that the claim of “political persecution” may be diplomatically unacceptable for the U.S. and its neighbors to the south. If for some reason the Indian applicant can’t convince the first rung of investigators that his fear is truly credible, he is bundled off to detention centers awaiting more detailed hearings on his credibility.

For the first eight months of 2013, it has been reported that in excess of 2,000 Indian nationals requested asylum on the basis of political fears. Hundreds more have been caught crossing illegally through the desert by the Border Patrol. Apparently these migrants were less confident of the story with which they were armed. The statement of “credible fear” accepted by the immigration authorities is not at all in sync with a State Department that does its best to extol the democratic virtues of New Delhi’s governance (much to the consternation of Pakistan). By the standards applied to the Indian migrants, every country in the world would be able to have citizens seek asylum elsewhere based on “credible fears.”

The Indian illegal influx was first reported publicly in a Los Angeles Times article in February 2011 centered on border crossing into Texas. It wasn’t until early this month that a front page investigative story in the Arizona Republic followed up what obviously has been well known to U.S. authorities for quite some time. Since then a full court press has been engineered by the DHS to counter claims of its willing participation in what the very least has been an exercise in political favoritism.

The process of smuggling these particular illegal migrants is perhaps the most expensive (for the migrant) in the catalogue of past human trafficking. Professional smugglers in India make the arrangements that result in the immigrants landing in Central America and traveling up through Mexico to the United States. In many instances all the migrant’s possessions and personal documentation are stolen during the trek. The charge for the smuggling operation is reported to be $27,000–35,000, ten times the usual Mexican cartel fee. Some of these illegals attempt the hazardous cross-border trip on their own through the Southwest desert if their guides do not lead them to the legal crossing stations where they apply directly for political asylum. Upon initial questioning the migrants are sent to detention facilities to await their claims processing. They are returned on DHS buses to the control facilities later to receive their papers regarding future judicial hearings. These often non-English speaking Indian immigrants awaiting hearings are then herded by private “transporters” to taxis and other vehicles and disappear into the country — some as far away as the East Coast. Most often that’s the last any U.S. Immigration officers ever see of them.

A good portion of the undocumented Indian migrants are of Sikh background. The Sikhs have had an ever-increasing community in the U.S. since the 1984 assassination of Prime Minister Indira Gandhi with which Sikh guards were charged. Nonetheless, Hindus from the Punjab and Gujarat tend to make up the largest segment of the other smuggled migrants. In all cases there is a tendency for the illegals to seek out and be supported by their own ethnic or provincial grouping. This seeming altruistic caretaking is in fact often a form of indentured servitude administrated by the group already economically ensconced in the U.S. As the migrants arrive virtually penniless, they work for a lengthy period of time at the established Indian businesses at no wage beyond subsistence until the smuggling debt is repaid. These loan arrangements are made back in India even before the migrants have left for America.

For reasons known only to DHS, this form of modern peonage, although expressly forbidden under U.S. law, is either overlooked or bureaucratically camouflaged in the governmental process. Under the guise of attempting to speed up the process of immigration, the appropriate sections of the federal government are aiding and abetting illegal forms of immigration. Well-meaning pro-immigration groups must also share the blame for giving encouragement to the concept itself.

There is no doubt that immigrants with needed talents should be aided and encouraged to come to the United States, first as residents, later as citizens. But the key here is “needed talents.” A large portion of the Hindi-speaking migrants are farmers who sold their land to acquire the down payment needed for the compensation to the smuggling cartels. The incidents of Indian hi-tech workers trying to slip illegally into the U.S. are negligible. Talent, not poverty, should be the criteria in the 21st century. Credible fear of persecution and/or exploitation is too convenient and self-serving at a time when the world is torn by totalitarian religious and political regimes too numerous to count.