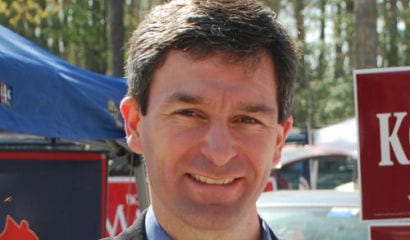 In the hottest race of 2013, things seem to be turning around for Ken Cuccinelli, the Republican candidate for governor of Virginia. As I wrote here, he is an impressive fellow facing very difficult demographic shifts which are transforming the northern Virginia suburbs into a kind of Chicagoland, i.e., the big metroplex, tail that wags the dog, so to speak, in statewide politics.

The Democratic candidate, fundraiser extraordinaire, and all-around Party Animal, Terry McAuliffe, has been carpet-bombing Cuccinelli on “women’s issues,” climate change, and for being, well, conservative. He certainly seems to be winning the money chase, and it shows in the amount of negative advertisements.

And, as the saying, goes, negative advertising can work at least for a time. As early as August 7 the Washington Post screeched, “Va. Governor’s race drips with venom.” Of course, Cuccinelli has given back in kind, going after McAuliffe’s dodgy business relationships, general shallowness on issues, and for promising everyone everything. In other words, the candidates are emptying their cartridges on each other.

Just yesterday, Ken Cuccinelli sent out an email letter to supporters notifying them of a new app and website, “Terry McAuliffe’s LiePad,” put up by the Republican Governor’s Association with special features such as “Terry’s LieTunes” and Terry’s Liebook.”

“When things get complicated, you need to simplify,” says LiePad. “When you have so may lies, you need a convenient place to store them. That’s where we come in.” Hardly subtle, but subtlety is for the faculty lounge, not a political brawl.

At one point Cuccinelli was falling behind, from his high standing in the spring, or so it seemed, with something like a 7-point lead opening up for McAuliffe in late summer and early fall, according to several polls including even Rasmussen’s, every Pachyderm’s favorite pollster. The headline in the Washington Examiner back on August 29 was “Terry McAuliffe pulling away from Ken Cuccinelli in Virginia Governor’s race.”

But, lo and behold, the latest polls, per the RealClearPolitics tally, are showing a remarkable turnaround. Ken Cuccinelli seems to be catching the Big Mo as he heads into the home stretch.

The Quinnipiac poll this past week had McAuliffe up by just 3 points, less than his 6-point lead he previously held in the same poll. Roanoke College’s poll has the Party Animal up by just 1 point.

A stunning development was the endorsement of Cuccinelli by Tech PAC, the political arm of the very powerful, very influential Northern Virginia Technology Council, despite a furious last-minute lobbying campaign by the McAuliffe forces. Evidently, the PAC was not quite impressed with the Party Animal’s claim that, since he was Irish, his drinking habits would help with economic development efforts. I am not kidding. Check out the Washington Post story here. Nice job, Terry. Keep perpetuating those ethnic stereotypes.

Ken Cuccinelli immediately used the Tech Pac endorsement to rebut claims that his social conservatism was an obstacle to drawing out-of-state companies to Virginia, as alleged by the Party Animal. He highlighted the contrary opinion of the political action committee representing one of the state’s most dynamic sectors.

The fact that McAuliffe, an Irish Catholic, is going hard left on social issues, and Cuccinelli, a northern Virginian, is going hard right, say, on the “War on Coal,” is symptomatic of an election mostly focused on each candidate’s respective base and turnout. An off-year election like this could see 40 percent fewer voters than in a presidential year and the intense negative advertising could turn off many more voters. McAuliffe is obviously targeting women, swing voters, and socially liberal Republicans while Cuccinelli is targeting the outstate or downstate vote.

Clearly, so much of the substantive work in this campaign, on both sides, is way below the radar. To mix metaphors, the media duel is like the tip of the iceberg. So much work is going into grassroots organizing as promised by Cuccinelli when I heard him speak early in the campaign. He knew he had to invest in campaign technology to close the gap with the national Democratic Party. If my electronic In Box is any indication, there is a plethora of right-of-center activist groups — gun rights, economic libertarians, Women for Ken, right-to-life, et cetera — all working hard for their man Ken. Moreover, McAuliffe is no doubt firing up the Obama field organization, a battle-tested operation if ever there was one.

Hopefully, Cuccinelli’s resurgence in the polls will give his fundraising a big lift. He needs it given McAuliffe’s resources and support from his long-time patrons, Mr. and Mrs. Clinton. I think it is a safe bet that we are in for a long, brutal scorched-earth campaign from now through election day. It is not very edifying. But, then again, it never is. Is this a great country or what?