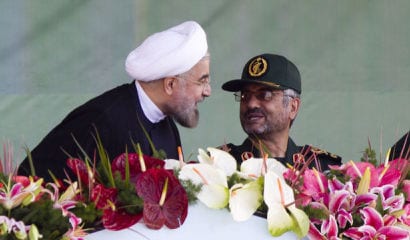 Tomorrow will be a proud day for Vladimir Putin. The foreign policy trail he blazed as a mentor to the world’s despots will be followed at high speed by Iranian President Hassan Rouhani.

Putin showed the world how easy it is to take advantage of President Obama. First, Putin led him on into a strategic arms limitation agreement which severely disadvantages America. Never before had we conceded that missile defense systems would be included in arms limitation because, by definition, they are purely defensive. Putin overcame that and established a vague limitation on them. And then Obama assured Putin’s puppet, Medvedev, that he’d have more flexibility once he was re-elected.

Obama was good at his word, at least in that instance. Putin’s rope-a-dope play on Syria left Obama bamboozled and having to demonstrate his flexibility with the facts by denying that his “red line” prohibiting Assad from using chemical weapons was his creation. The agreement Putin pushed into existence won’t have any effect on Assad’s possession or use of those weapons. It will only serve to demonstrate, redundantly, Obama’s diplomatic incompetence.

In the buildup to the UN General Assembly session on Tuesday, Obama is being set up by Iran to dash along Putin’s path again like a child chasing an ice cream truck. Iran has learned a lot about diplomacy. Gone is the fire-breathing Mahmoud Ahmadinejad, the Izod Ayatollah who would smile while condemning America and Israel to eternal damnation. His replacement, Rouhani, is all calm smiles and dressed as an Iranian cleric, not a prep school graduate.

Rouhani emulated Putin by writing an op-ed for the Washington Post. It paralleled Putin’s New York Times piece of the week before. Rouhani wrote about how the world has changed in the past decades, how “we” need to pay attention to the complexities of the issues in order to solve them, and dedicating his nation to two principles. First, creation of a regional solution that enabled peoples to decide their own fate. And, second, to address “broader injustices” that fuel violence everywhere in the region.

Iran’s brand of Shia Islam is entirely intolerant and in Iran denies basic human rights, so its “dedication” to self-determination is a bad joke. The “broader injustices” are spread by Iran through terror with its “Quds Force” and Hezbollah terrorists. In short, it was so broad a concatenation of false promises and misstatements of Iranian intentions that it must have brought a smile to Putin’s face. The mentor must be pleased.

Iran’s “Supreme Leader” — Rouhani’s boss — Ayatollah Khamenei, said last week that he’d support “heroic flexibility” in negotiations on Iran’s nuclear program and repeated his assurance that Iran would never develop nuclear weapons. (His “heroic flexibility” is limited by a blanket refusal of Iran to stop enriching uranium to weapons-grade fissionable material. He doesn’t admit the many proofs of Iran’s nuclear weapon development which include the development and testing of nuclear weapon triggers and missile warheads.)

As we have come to expect, the press is salivating at the prospect of some deal between America and Iran. The usual media suspects — columnists in the Washington Post and the Financial Times to name just a few — are all atwitter about a letter exchange last week between Rouhani and Obama in which Rouhani opened the door to a nuclear deal.

And the prospects for a deal — whatever it provides — leave the liberals agog. Their enthusiasm increases the pressure on Obama to do something, anything. Consider this utopian passage from a David Ignatius piece in the Post yesterday:

The opportunity for a breakthrough with Iran after 34 years of isolation is tantalizing for Obama and his foreign-policy team. It’s the sort of big idea that conjures up visions of a new regional order that reconciles the rising revolutionary powers with the status-quo powers, much as the Congress of Vienna did for Europe in 1815. One huge benefit is that a new security framework might check the Sunni-Shiite sectarian war that is ripping apart Syria and Iraq and straining Lebanon and Bahrain.

So all that is necessary for peace in our time — to revive a phrase — is for Obama to cut a deal with Rouhani on all the problems of the Middle East. What arrant nonsense. Ignatius urges Obama to “think big,” which Obama usually does. In Obama’s case, “think big” excludes the precondition of “look before you leap.”

Khamenei and Rouhani have a great opportunity that Putin’s successes have made possible. What would they want in any agreement with the U.S.?

First, they’d want a concession by America equal to the one Putin negotiated on missile defense. And there is a precedent for one. Obama canceled a ground-based missile defense system for Poland that — as George W. Bush said when he announced it — was intended to protect Europe from an Iranian missile attack.

To equal the concession Putin got on missile defense, and fully exploit Obama’s incompetence in foreign policy, Rouhani would have to get a deal in two parts. The first part would have to affirmatively state that Iran has the right to develop any nuclear technology for peaceful purposes. The second part would provide for the relaxation of economic sanctions against Iran based on its promise that nuclear development wouldn’t include nuclear weapons. It might even recognize Iran’s “equal rights” within the community of nations.

What such a deal wouldn’t do is guarantee no-notice random inspections of Iran’s nuclear development sites, nor would it require the disclosure of them all. It wouldn’t provide for verification of the cessation of uranium enrichment before the economic sanctions (which have had zero effect in stopping Iran’s enrichment efforts) were lifted.

It would almost certainly guarantee that cyber attacks on the Iranian program — such as the Stuxnet computer worm attack — would never happen again.

In short, it would clear the path for the final stages of Iran’s nuclear weapon development.

We can expect Rouhani to address these ideas in his first UN speech. And we can expect the speech to be welcomed not only by the press but by the Obama administration, which is eager to heal the wounds it suffered at Putin’s hands on Syria. Obama will be desperate to shed the dunce cap he earned with his “now I want to bomb them, now I don’t” charade.

After the arms limitation treaty with Russia and the Syria debacle, there’s no doubt that Obama would fall for all of this. And there will be little to stop him from doing that sort of deal.

Congressional Republicans won’t stop him. Obama will assert his right to make this sort of deal without a treaty being ratified. The Republicans, determined to find a way to fund Obamacare without looking like they did it, won’t object.

That leaves it to the Israelis and some of the Arab countries — most importantly Saudi Arabia — to stop a deal. The Israelis don’t have a vote. Obama has been exerting extreme pressure on Israeli PM Netanyahu to not attack Iran, and Netanyahu’s domestic political mess is enabling Obama to succeed in that. Saudi Arabia — and other Arab states — are in terror of Iran’s nuclear success but even they aren’t likely to persuade Obama that any deal with Iran is unwise.

Obama may still be in office when Iran announces it has become a nuclear armed nation or even explodes a test weapon under some expanse of desert. It will be a lot easier for him to explain than for Benjamin Netanyahu. It won’t conflict with Obama’s worldview. But it will conflict with Israel’s existence.