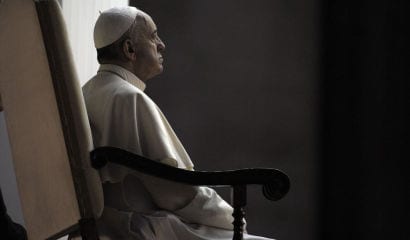 In St. Paul’s Letter to the Galatians, he wrote that he rebuked the first pope, St. Peter, “to his face because he clearly was wrong.” The issue was St. Peter’s capitulation to Jewish culture in his approach to the Gentiles. St. Paul moved swiftly to correct him for the sake of the early Church’s unity and doctrinal fidelity to Jesus Christ. St. Peter, he wrote, had gone wobbly after meeting with a group of Jewish Christians who insisted that the Gentiles follow Jewish rules rendered obsolete by Jesus Christ:

For, until some people came from James [Paul’s reference to Jewish Christians], he used to eat with the Gentiles; but when they came, he began to draw back and separated himself, because he was afraid of the circumcised. And the rest of the Jews acted hypocritically along with him, with the result that even Barnabas was carried away by their hypocrisy. But when I saw that they were not on the right road in line with the truth of the gospel, I said to [Peter] in front of all, “If you, though a Jew, are living like a Gentile and not like a Jew, how can you compel the Gentiles to live like Jews?”

St. Thomas Aquinas used this episode in his commentary on the right of subjects to resist flaky superiors:

There being an imminent danger for the Faith, prelates must be questioned, even publicly, by their subjects. Thus, St. Paul, who was a subject of St. Peter, questioned him publicly on account of an imminent danger of scandal in a matter of Faith. And, as the Glossa of St. Augustine puts it (Ad Galatas 2.14), ‘St. Peter himself gave the example to those who govern so that if sometimes they stray from the right way, they will not reject a correction as unworthy even if it comes from their subjects.” (Summa Theologiae, IIa IIae, Q. 33, A. 4)

All of this is highly relevant to the pontificate of Francis. For the good of the faith, laity, clergy, bishops, and particularly powerful cardinals should start playing Paul to Francis’s Peter, as his culturally conditioned liberalism threatens to undermine the unity and orthodoxy of the faith. Peter snapped out of his pandering phase; let’s hope Francis does the same.

Even if given the most charitable reading, Pope Francis’s recent interview with Jesuit publications was alarming in its spirit-of-Vatican II liberalism. Catholicism is not a personality cult and so Catholics, following the example of St. Paul, don’t need to ooh and aah over unsound, non-infallible remarks, which were made incidentally to publications like America known principally for their heterodoxy.

Some future Edward Gibbon should devote a chapter or two to this grimly comic episode: a Jesuit pope chatting about the appeal of diluted orthodoxy and “pastoral” effectiveness with the least pastorally effective and most heterodox order in the Church. We can’t “obsess” over abortion, contraception, and gay marriage “all the time,” he said, telling his fellow Jesuits exactly what they wanted to hear. They don’t even talk about those issues some of the time.

In the body of Christ, the Counter-Reformation Jesuits served as the Church’s spleen. Today’s Jesuits serve it, if at all, as the little pinky. Left-wing Jesuit ninnies such as Thomas Reese and James Martin turn up on talks shows to soft-pedal Church teaching; Jesuit schools and universities produce an endless stream of pro-abortion, pro-gay marriage graduates; Jesuit seminaries either look like ghost towns or gay bars. Even the liberal Garry Wills is appalled by the order’s decadence, writing in 2002:

Entering the Jesuits used to take one into a stable world; but that is far from the experience of recent times. A thirty-five-year-old still studying theology says: “My novice master left to marry, my formation director left for a relationship with another man, et cetera. One cannot help but get the sense that we of this generation of Jesuits may be the last of the Shakers.”

It says a lot about the crisis in the Church that the first Jesuit pope in history came at the very moment the order was weakest and most corrupt. The Pope’s scolding of “small-minded” restorationists for “pastoral” incompetence is laughable in light of his own order’s disintegration: What exactly would the editors of America and the other Jesuits whose liberalism Pope Francis was flattering in the interview, know about saving souls? Just look at the U.S. Congress: it is overflowing with Jesuit graduates who have abandoned the faith and support abortion and gay rights. Oh-so-pastoral Jesuits, heal thyself.

Pope Francis has made many commendable remarks about the Virgin Mary, Satan, and the need to go to confession, among others. And some of the criticism does seem petty: Who cares if he bunks at the Vatican hotel or putts around in a used car? That’s fine. But it is not petty, disrespectful, or un-Catholic to object to the liberal parts of his agenda. Indeed, the need for a St. Paul to correct him grows with each passing week as his pontificate emboldens the Church’s enemies and undercuts her friends and most loyal members.