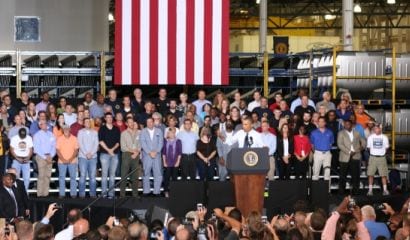 Displaying their ignorance of the U.S. Constitution, Democratic bigwigs are excoriating Republican members of the House of Representatives for attaching a condition — no Obamacare — to a stopgap bill to fund the government. Senate Majority Leader Harry Reid called it “extortion.” Rep. Steny Hoyer labeled it “hostage-taking.” Rep. Nancy Pelosi termed it “legislative arson.”

In truth, what the House Republicans are doing is not blackmail. It’s checks and balances in action. Congress has always had the power to attach almost any condition — including repealing or changing a law — to appropriations. The framers wrote the Constitution that way for good reason.

The nation’s first plan of government, the Articles of Confederation, had no president. When the framers gathered in 1787 to write a second, more effective plan, they reluctantly created the presidency. Reluctantly, because the founders worried that a president would accumulate power and spend flagrantly as they had seen the despotic kings of Europe do.

To prevent that, the founders created checks and balances. In the words of James Madison, the Constitution’s chief architect, each branch of government is “effectually checked and restrained by the others.”

Congress was given power over the purse — the power to appropriate money and to borrow it or raise it through taxes, because locating the power in Congress would force the president to constantly negotiate with Congress.

Fast forward 226 years to last Friday. President Obama called Speaker of the House John Boehner to say “he will not negotiate” with Congress on raising the U.S. government’s borrowing authority. The President, who claims to be a constitutional scholar, needs a refresher course.

The same day, Obama whipped up a crowd at a Ford plant, complaining that by attaching conditions to the appropriations bill, House Republicans are “trying to mess with me.” Yes, they are, Mr. President, though Madison expressed it with more elegance and precision.

“An elective despotism is not the government we fought for,” Madison wrote in Federalist 58. A president with the power to borrow and spend at will would be just that.

Sadly, large numbers of Americans are at risk of being bamboozled by the Democrats’ inflammatory accusations and warnings of a government shutdown.

One reason is that shockingly, only a third of Americans can identify the three branches of government (Pew Foundation poll). That’s how gravely our civics education has failed.

Secondly, the President’s party is fanning fears of a shutdown, something no one wants. But let’s be clear: the military would continue to operate, doctors and nurses would still come to work at federal hospitals, air traffic controllers and other emergency personnel would be on the job, and everyone would eventually get paid. If you’re planning a trip to Yellowstone National Park, you might be inconvenienced.

Compare that to what’s at stake: preserving the Constitution. The health reform the President is insisting on implementing is a distorted, mangled, half-baked version of what Congress enacted in 2010. It is no longer the Affordable Care Act. The President is illegally picking and choosing what parts to keep. Gone is the employer mandate, the cap on out-of-pocket expenses, income verification for subsidy recipients, and over half the deadlines in the law. These changes are not just illegal. They shift billions of dollars in costs onto taxpayers, cheat seriously ill patients, leave employees in the lurch, all in a devious attempt to patch up an unworkable law.

In Federalist 62, Madison warned that it will be pointless for Americans to elect a Congress, if it in turn enacts laws “too voluminous to be read,” or if these laws then “undergo such incessant changes that no man who knows what the law is today can guess what it will be tomorrow.” That’s Obamacare. .

In last week’s Saturday radio address, Obama again confronted House Republicans, demanding that they fund the government, no questions asked. Obama claimed that “the most basic constitutional duty Congress has is passing a budget.”

Wrong again, Mr. President. Congress’s most basic duty is to protect and defend the Constitution, and withholding the money is the chief way to do it.