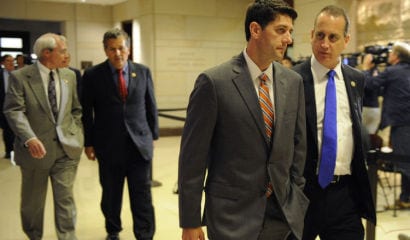 Three cheers for the crazies. You know who they are. They’re Republicans in Congress who understand what Brent Bozell said about Obamacare: if you fund it, you own it.

These are the same people who led Washington Post columnist David Ignatius to cry crocodile tears for John Boehner because he’s unable to lead them into another reasonable “compromise” with Obama. Ignatius means, of course, a compromise that amounts to another surrender but with a smiley face painted on it. They’re people who refuse to be talked down to by Republican “moderates” such as John McCain and who aren’t about to be “reasonable” so long as that word is defined as giving Obama everything he wants.

These are people like Sens. Ted Cruz and Mike Lee. People like those who refuse to swallow more “moderate” compromises engineered by John Boehner to keep the government open. If these guys are crazy, count me among them.

Republican leaders are clinging to Boehner’s latest proposal for the same reason a drunk clings to a street light: not for illumination, but to keep from falling down. The latest proposal — to fund the government through mid-December, impose a one-year delay on Obamacare, and repeal the Obamacare tax on medical equipment — is more of the same. When House Speaker John Boehner announced that proposal on Saturday, the response from the Dem leadership was entirely predictable. They will reject it formally today.

The biggest reason Obama’s able to shun the Republicans is that the state-run media — ABC, CBS, NBC, CNN, the New York Times and the Washington Post — have been marching in lockstep for so long, working hard to institutionalize the public’s view that any shutdown — and its supposedly dire consequences — would be wholly the fault of Republican “radicals.” They’ve terrorized the Republican leadership, having convinced them that the public believes it. Since Boehner became Speaker, he’s avoided a shutdown at all costs for that reason alone.

Since 1976, says Politico, there have been 17 government shutdowns. Each ended in a political compromise. So what’s the big deal?

The big deal is that Obama refuses to negotiate anything. Not the debt ceiling. Not spending cuts. Not Obamacare. Nothing. The reason he refuses is he believes that he’s already won the fight. There’s no need to deal with an adversary that’s been defeated.

There’s only one solution, and Republicans are stumbling toward it: let the government shut down for a few days, weeks or months in order to force Obama to the bargaining table and into a real compromise in which he has to give up something important such as Obamacare funding.

Obama’s contumacious refusal to negotiate to prevent a government shutdown leaves them no choice. If they want to make electoral gains, they have to show the kind of courage Cruz showed with his filibuster. They’ve not displayed it since Obama was inaugurated. It’s long past time for them to do so.

Win or lose, it’s time to change the game. For the current incarnation of the Republican leadership, it’s win or go home. They have been consistently unwilling to take political risks, to engage in the kind of hardball politics that produce results. They’re always warning us that there will be a Republican disaster if the government shuts down. The results, since January 2009, are an unbroken string of successes for Obama, expanding the government and what we have to pay for it.

It’s time for some of the younger guys and gals to take over. People who aren’t afraid of political combat. People who stand for something. That can’t happen until a new Congress convenes in 2015. Meanwhile, there’s much that can be done.

If Republicans seriously want to get a positive result from a shutdown, if they really want to force Obama to bargain with them, they have to do a lot more than they’ve done. And they have to stage-manage it expertly. Here are a few suggestions that won’t be implemented because Speaker Boehner would have to act like a conservative.

Starting today, and for every day the government is shut down, a band of Republican leaders — Boehner, Budget Committee Chairman Paul Ryan, Ways and Means Chairman Dave Camp, Appropriations Committee Chairman Hal Rogers — should hold morning press conferences demanding that Obama negotiate. They could point out that Obama is negotiating a nuclear deal with Iranian terrorists but won’t talk to Republicans. They should mock Obama, saying that he must fear them more than the Iranians and that they’d like to negotiate but they don’t have a “peace partner” like the Iranians do. When the shutdown starts tomorrow, they could have a big clock on stage with them to show how many hours and minutes Obama has shut the government down.

In each afternoon, those worthies (and any other Republicans who want to tag along) should cram themselves into a bunch of cabs to the White House to seek a meeting with Obama to negotiate a deal. They must refuse to meet with cabinet members or staff. And whether or not they get in to see him, they should hold another presser outside the White House gates to blame him — again — for the shutdown because he won’t deal with them in good faith. They should say it just that way.

Boehner should arrange the House calendar to ensure that nothing else is done until the president comes to the bargaining table and agrees to a big compromise. The House can pass bills (and is already planning to do some of them) to keep the military funded, to keep other national security agencies funded (which excludes the State Department but regrettably has to include TSA).

There’s no need for the House to stop doing anything else because that helps put the monkey on Obama’s back. There’s no point in trying to deal with Pelosi or Reid and every reason to refuse to do so. They’re mere functionaries. Obama should have to come to the table, and Boehner should say that again and again, probably to the exclusion of everything else.

Talk radio audiences would love this. Fox News could cover it as if it were the resurrection of Michael Jackson. And the rest of the media couldn’t ignore it.

Yes, the Obama team will campaign against them in the media and get a lot of airtime and newspaper column inches. Yes, the NBC/MSNBC coven will scream and the New York Times will be apoplectic. But they’ll have to devote time and space to what the Republicans are doing. They’ll do their best to show how grandmas are starving and crippled kids aren’t being cared for because of the heartless Republicans shutting down the government. But as much as they may try, they can’t cover up the story of a conservative rebellion against Obama’s statists.

They can only cover it up if there isn’t one to cover. Win or go home, boys. It’s up to you.