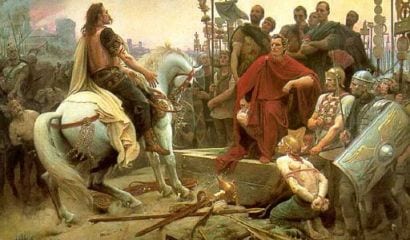 During a crucial battle of the military campaign that ultimately propelled him to supreme power in Rome, Julius Caesar put himself and his outnumbered army in such a vulnerable position that he briefly considered suicide. He and most of his troops survived, however, because the man commanding the opposing force was too timid to take a tactical risk. Afterward, surprised to find himself alive and his army relatively intact, Caesar made an observation that the leadership of the GOP would do well to remember: “Today the enemy would have won, if they had a commander who was a winner.”

I was reminded of those words when I heard Senator Ted Cruz tell Rush Limbaugh that, in the Republican Conference, “We don’t even talk about winning a fight … they don’t believe we can win.” This defeatism has not been lost on the GOP’s conservative base, which has been waiting with increasing impatience for the party to do something — anything — about Obamacare. Sadly, the Republicans can’t shake off their pessimism long enough to permanently defund that pernicious program. The result may well be that the voters who restored them to the House majority in 2010 will sit out the 2014 midterms.

This contradicts the conventional Beltway wisdom, of course. The same geniuses who told us in 2012 that Mitt Romney should get the GOP presidential nomination because he was “electable” now assure us that the voters will punish the Republicans if they defund Obamacare and force a partial government shutdown. In fact, Romney himself did an interview last Friday in which he articulated the self-defeating diffidence of the Republican establishment: “We’re more effective tactically not to use a shutdown of some kind to pursue the… anti-Obamacare objective… it’s going to hurt our party.”

This is not how winners think. Winners understand that, to prevail against business competitors, political opponents, or military enemies, it is necessary to take calculated risks. They also understand that inaction and half-measures usually result in failure. Ironically, the dreaded shutdown that fills Republicans with such terror isn’t as risky as they believe. There have been many such shutdowns and few have produced dire consequences for the GOP. Even the media-hyped 1995 shutdown, as Jeffrey Lord has pointed out in this space, failed to result in more than modest losses in the subsequent midterms.

Nonetheless, having just 10 days ago passed a bill that completely defunded Obamacare, House Speaker Boehner and his lieutenants have reverted to form. After last week’s protracted but eloquent speech by Senator Cruz explaining why Obamacare is bad for the health of the economy and the electorate, the Democrat-controlled Senate promptly reinstated the funding removed by the House. Instead of standing pat on defunding, however, the House leadership has responded with a half-measure that will get them nothing but another rebuff by the Democrats, abuse from the media, and the scorn of the voters.

Sunday morning, the House approved a measure “that would fund the government through Dec. 15 while delaying implementation of Obamacare for one year.” This funding bill “also includes an amendment to repeal the medical device tax.” It’s difficult to understand what the House leadership expects to gain from this compromise, unless one believes reports that it has been part of the GOP’s end game all along: “Republicans… have been demanding a complete defunding of the Obamacare law in order to set up the White House for a one-year implementation delay and a 2014 electoral showdown.”

There are two problems with this tale of intrigue: First, the GOP’s leadership has shown little aptitude for conceiving and carrying out such Machiavellian maneuvers. Second, it requires the Democrats and Obama to make a deal. If the former is implausible, the latter hardly passes the laugh test. Senate Majority Leader Reid has, in effect, already pronounced this latest House bill dead on arrival: “Today’s vote by House Republicans is pointless… Republicans must decide whether to pass the Senate’s clean CR, or force a Republican government shutdown.” Reid clearly believes he has no need to negotiate.

He and the rest of the Democrats are, as Senator Cruz pointed out Sunday morning, utterly intransigent on Obamacare: “It is the Democrats who have taken an absolutist position.” The only dim ray of hope that they might be open to compromise came early Sunday morning from Democrat congressman Jim McGovern. When asked by House Appropriations Committee Chairman Hal Rogers if the President’s threat to veto any bill that defunds or delays Obamacare means he has drawn a red line on this issue, McGovern replied, “Yep.” One hopes the President is as irresolute on this as he was with Syria.

This is unlikely, of course, because Obama’s animosity toward the GOP is far more intense than any antipathy he feels for rogue Middle Eastern regimes. He appears, for example, more willing to talk with the President of Iran than to negotiate with Speaker Boehner. Thus, the Republican attempt to compromise on defunding makes the party’s leadership seem unwilling to take the political risk required to stop Obamacare. To the party’s conservative base, in other words, it looks like they aren’t trying very hard. It’s difficult to think of a better way to breed voter apathy and lose control of the House.