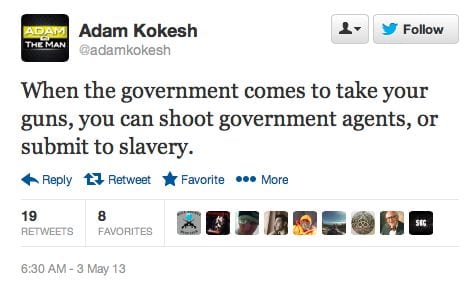 I am a libertarian. It is not the totality of my identity, but it is an overriding driver in my life. My ideology reflects the same love of truth and intellectual discovery that led me to pursue journalism. My specific beliefs would strike most people, even most intellectuals, as radical. No central bank. Regulation exclusively through torts. Thoroughly privatized education. However, it all revolves around something called the non-aggression principle. Whereas, the initiation of coercion, here defined as an actual or credibly threatened violation of the negative rights to life, liberty, or private property, is ethically impermissible.

That is quite a mouthful. Indeed, many if not most libertarians are philosophical, preoccupied with principle and consistency. Classical liberalism also encompasses enormous intellectual diversity. Fusionists on Capitol Hill and agorists in New Hampshire have fundamentally different conceptions of liberty. But classical liberals are united (not collectively, of course) by their belief that liberty is vitally important to human flourishing.

Adam Kokesh is a libertarian anti-war protester, which suits me and most other libertarians just fine. He is also a truther, charging that the United States government staged 9/11. This certainly does not suit most libertarians, myself included. Unfortunately, conspiracy theorist Alex Jones and (it must be said) sometime-conspiracy theorist Glenn Beck are most readily identified with libertarianism by the mainstream media. Milton Friedman’s libertarianism is comparatively overlooked. Ron Paul’s presidential runs helped demystify the term. Regrettably, his dopily avuncular persona reinforced some tinfoil caricatures. (I say this as someone who loves Ron Paul as dearly as I rue his uncritical association with dubious characters.) His senator son Rand is helping polish the brand. The Kentucky Republican is a presidential front-runner and important leader in a party looking for a future. And yet, the descriptor libertarian remains mostly a pejorative flung by his critics. Jones and (inconsistently) Beck are identified by the media first and foremost as libertarians. (The only other famous, so to speak, libertarian I can think of is genius billionaire futurist Peter Thiel, co-founder of PayPal.)

Comrade Kokesh joined the pantheon of crazy earlier this month by announcing an open carry gun rights protest march through Washington, D.C. on Independence Day. He and thousands of fellow protesters propose to circle the Capitol, Supreme Court, and White House with loaded rifles on their backs. (Funnily enough, Kokesh started selling silver coins on his website around the same time.) Officially Kokesh promises he will take pains to ensure peaceful civil disobedience in the tradition of civil rights marches. However, he told Alex Jones in a recent interview, “This is an armed revolt against the American government. Make no mistake about it.” His inconsistency actually makes it rather hard to tell. In any case, there is obvious potential for bloodshed. It would only take one protester bent on committing suicide in the most spectacular way possible or one nervous law enforcement officer to open fire and spark a massive shootout. The route includes Pennsylvania Avenue, right by the White House. Jones, a man who believes the Illuminati uses commercial airliners to spray mind-control chemicals, is not attending the event because he thinks “bad things might happen.”

At this juncture I wish to assert unequivocally that most libertarians think this march is a terrible idea (and that Alex Jones is a crank). Like myself, they worry it will empower the enemies of liberty. It will increase the political viability of gun control, perhaps enough to revive the Manchin-Toomey background check compromise at the heart of Democrats’ main gun control proposal (currently in hibernation thanks to a deft procedural move by Senate Majority Leader Harry Reid). Calculated escalation of tension surrounding the march could get gun control passed before July Fourth.

I could make a lot of points here, but ultimately I wish to emphasize that most libertarians are reasonable folks. They tend to be bright, happy, optimistic people. A lot of them are libertines (which turns out to be rather harmless), but I daresay the majority is comprised of prudent adults trying to navigate a world they find fascinating. Most of my beloved readers are conservatives, and my message to you is that many libertarians are interested in working as partners to create a more just, prosperous world in which individuals of all kinds can peacefully coexist. Adam Kokesh is a libertarian much as Albert Einstein was a utopian socialist. His ideology has little bearing on his ideas about how human society can progress.