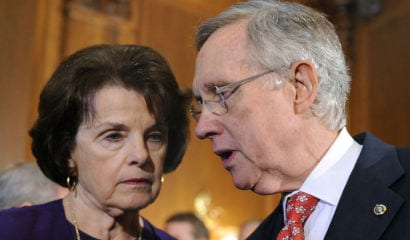 The Senate has begun debating landmark gun control legislation. The House will soon have its own proposals. Background checks are in the spotlight. Democrats and their allies want to expand them by eliminating exceptions like the “gun show loophole,” which applies to private sales between individuals, and augmenting the national database of criminal and mentally unstable persons. But the whole story is more complicated.

Gun control supporters saw Sandy Hook as their golden opportunity. The nation was utterly traumatized and public opinion shifted in their favor. They were initially optimistic for Senator Dianne Feinstein’s (D-Calif.) proposed federal assault weapons ban, more stringent and permanent than her 1994 measure, which expired in 2004 (a sunset provision compromise had been key to passage).

The latter would create a “grant program for school security” and a “National Center for Campus Public Safety.” Without being glib, this direct response to Sandy Hook would probably find comfortable support from a coalition of progressives, moderates, and some conservatives. Demanding justice for heinously murdered children, in word or deed, is a bipartisan issue.

The second sub-act attaches harsh federal penalties to gun trafficking, the transport of a firearm purchased in one jurisdiction to another (as when guns purchased in Mississippi end up in the hands of Chicago gangbangers), and straw purchasing, in which an individual buys a firearm to give to someone else who would not pass a background check, particularly someone with criminal intent.

Section 207 brings to mind the Operation Fast and Furious scandal. It essentially forbids a licensed gun owner from being compelled by the Department of Justice to sell a firearm to someone it believes intends to use it criminally unless DoJ is confident the weapon can be confiscated before any damage is done. The attorney general, deputy attorney general, or assistant attorney general for the Criminal Division must personally review and approve the operation in writing.

The “Fix Gun Checks Act” is the most important, controversial leg of S.649. Subtitle A directly addresses the FBI’s National Instant Criminal Background Check System (NICS). It reauthorizes grants to improve it and penalizes states that do not provide information to the database. “Subtitle B: Requiring a Background Check for Every Firearm Sale” speaks for itself, extending checks introduced by the 1993 Brady Handgun Violence Prevention Act. Exceptions are made for “bona fide gifts between spouses, between parents and their children, between siblings, or between grandparents and their grandchildren” bequeaths; and temporary transfers while hunting or at a shooting range, given specific conditions. A written record is required for a transfer between unlicensed parties. The theft or loss of a legally owned or possessed firearm must be reported within 24 hours of discovery, “to the Attorney General and to the appropriate local authorities,” under criminal penalty.

Showdown at the Cloture Corral
Expanding checks was previously considered fertile ground for bipartisan action, but gun control advocates are now locked in a hard fight. Most congressional Republicans flatly oppose any new gun laws. On March 25, Tea Party Senators Rand Paul (R-Ky.), Ted Cruz (R-Tx.), and Mike Lee (R-Utah) delivered a letter to Reid promising a filibuster: “We will oppose the motion to proceed to any legislation that will serve as a vehicle for any additional gun restrictions.” They were subsequently joined by other senators including Minority Leader Mitch McConnell (R-Ky.), who is up for reelection next year and concerned about a primary challenge from the right.

On April 9, Majority Leader Reid filed cloture on the motion to proceed to consideration of S.649, preempting the filibuster. This set the stage for a dramatic vote two days later that would require 60 ayes. The Senate approved the cloture Thursday morning 68 to 31. As reported by Politico, only two Democratic senators voted nay: Mark Begich of Alaska and Mark Pryor of Arkansas. The 16 Republican defectors were:

That said, votes to debate S.649 will not necessarily translate into votes to pass it. For instance, Senator Alexander warned he would oppose that measure the same day he voted to debate the larger bill.

A Grand Bargain
Lawmakers like Rand Paul oppose new gun laws according to a strict interpretation of the Second Amendment, on the theory that the Bill of Rights enumerates liberties without confining them. Opponents are also concerned that background checks could lead to a national gun database which could, in turn, facilitate confiscation of firearms by government.

Senate Democrats knew from the outset they would need bipartisan support for S.649, which remains at filibuster risk. West Virginia Democrat Joe Manchin reached out to Pennsylvania Tea Party Republican Pat Toomey hoping to forge a compromise on background checks. Working with Senators Chuck Schumer (D-N.Y.) and Mark Kirk (R-Ill.), they did. All four are listed as cosponsors of S. Amdt. 715, which would strike and completely replace the first part of S.649 and retitle the bill “Public Safety and Second Amendment Rights Protection Act of 2013.” The amendment is clearly aimed at attracting conservative votes. It pledges that Congress recognizes and values the Second Amendment right to keep and bear arms. It asserts that the bill is not and should not be construed as an attempt to create a national firearm registry. Manchin and Toomey have A ratings from the National Rifle Association, which has come out against their proposal.

Like the language it replaces, the amendment creates incentives for state information sharing and increases the number of people who would appear in the NICS database, focusing on the mentally ill. It expands checks to close the gun show loophole, but not universally. The ACLU and other groups are concerned that private sales will be recorded differently from dealer sales. Section 122 addresses this by requiring unlicensed transferees to use a licensed dealer as an intermediary: The seller would transfer the weapon to a dealer, who would run a background check on the buyer. Deference is given to existing state laws, and generous exceptions made for family transfers. Checks for gun show and other private sales are given priority in NICS over other unprocessed items. Veterans are protected (at least in theory) against wrongful mental health adjudications; military personnel are allowed to possess firearms in their state of residency, in addition to where they are stationed.

The Senate will enter a legislative session to debate the proposed amendment at 5:30 p.m. Whether it will have the 60 votes needed to defeat a filibuster is uncertain. As of now, Toomey, Kirk, Collins, and McCain are the only Republicans committed to SA 715. Politico reports that as of Sunday afternoon Democrats are short of the magic number but expect a vote as early as mid-week.

Feinstein’s Bans and Other Measures
Majority Leader Reid promised this amendment would be first on the docket, but it is the most recent addition to a substantial list. All “submitted and proposed” amendments to S.649 can be found via this link, and their text here.

Senator Feinstein is the title sponsor of two amendments. SA 711 is her weapons ban. Reid promised her two votes after stripping it from S.649, one on the entire proposal, the other on the extended magazine ban. SA 712 would add “foreign felons” — those convicted overseas — and domestic abusers to the NICS database.

SA 713 is sponsored by Judiciary Committee Chairman Patrick Leahy (D-Vt.) along with Senators Susan Collins (R-Maine) and Angus King (I-Maine). It is designed to address gun trafficking. Leahy and Collins have claimed the NRA endorsed a version of their plan, though its opposition to any expansion of background checks bears repeating.

SA 714 is a ten-round magazine capacity limit with the standard exception for .22 caliber rimfire ammunition. Connecticut Democrat Richard Blumenthal is the title sponsor.

The Grand Finale?
Handicapping S.649 writ large is difficult for a number of reasons. Other amendments are certain to be proposed, including Republican attempts to add “poison pill” provisions that would alienate far-left coalition members. The failure or success of any one amendment could make a huge difference. It is probably not viable without SA 715.

Judiciary Committee Ranking Member Chuck Grassley (R-Iowa) is working on his own gun bill which, as first reported by TAS, will focus on improving enforcement of current gun laws, state NICS compliance, student safety, and mental health issues. That proposal may pick off Republicans and conservative Democrats looking to balance public opinion and NRA clout in their voting records.

Majority Leader Reid will face difficulty getting a final vote without the cooperation of Minority Leader McConnell. And as the process stretches from weeks to months, further bills would add other currents to the political waters.

Meanwhile in the Lower Chamber
House Republicans are generally hostile to new gun laws, placing Speaker of the House John Boehner (R-Ohio) in a difficult position. He is concerned about a primary challenge on the right, but would face a public outcry for shunning Senate gun control legislation. After being explicitly non-committal on Wednesday, Boehner has softened, saying he would likely refer it to the House Judiciary Committee. There S.649 would face a lengthy markup that would target gun-specific provisions like the background check expansion. Boehner and company favor an approach centered on mental health.

If the bill ends up too far from where it started, the Senate and House will have to reconcile the two versions in Conference Committee, and then both houses would have to pass the final legislation.

Democratic staffers I spoke with last Wednesday say their situation has not evolved. “Nothing new” for the leadership, which remains in a holding pattern, waiting to see how the Speaker and others react to any Senate action. They meet this evening to plot their next move. Likewise, Representatives Mike Thompson (D-Calif.) and Peter King (R-N.Y.) continue to write their background check bill, which is essentially replicates the Manchin-Toomey-Schumer-Kirk compromise. Over the weekend King said it would be introduced today or tomorrow, but my contact close to those discussions said the bill remains very much a work in progress, with updates expected later this afternoon.