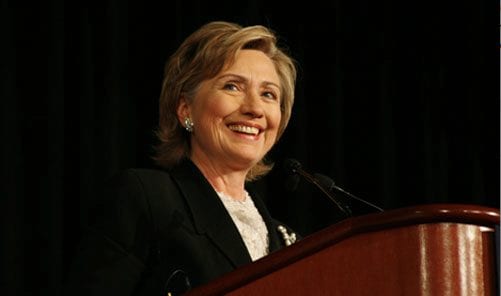 Well, I have news, not necessarily of the good variety. The Second Coming will happen in 2008. Yes, Hillary is running for President. How do I know for sure? Simple. The lying about lying has begun, and that is a surefire sign that the Clintons are back in business. Everyone in politics lies, but only the Clintons have perfected the art of lying about their lies.

The proof is in the putting out of an old fire and a new story. Hillary, it turns out, was not really named for Sir Edmund Hillary. But, her office assures us, she thought she was. It was her mother that lied to her about it. Yes, folks, she threw her mother under the bus. Except that she adds a word of understanding, a sense that her mother had good intentions. Why, that wonderful Hillary! She forgives her lying sack of an old lady. Ya gotta love it! The carnival is back in town: it’s Clinton Time!

Here is the synopsis, to bring our latecomers up to snuff. Back in 1995, the then-First Lady was visiting New Zealand and met the great adventurer, Sir Edmund Hillary, then 75 years old. Naturally, her true excitement expressed itself in a lie: she told him that her mother had named her after Sir Edmund, in admiration for his scaling Mount Everest. It did not take long for researchers to discover that Hillary Rodham was born in 1947 while Sir Edmund did not make it up the hill until 1953. This quickly became a synecdoche for all her other fabrications, obfuscations and tergiversations. How big a liar do you have to be to lie about your own name?

Later, she prudently left this gem out of her autobio. Then Bill imprudently included it in his. So this week we get the lie about the lie. Her office announces that her Mom told her this little white lie, but she did it in the hopes of encouraging her to scale great heights in her own life. The New York Times duly passes on the word, although the reporter is struggling desperately to keep his tongue from lodging in his cheek. Done. Hillary is now a) an innocent, b) a victim, c) honest enough to set the record straight, d) big enough to forgive her Mom.

You have to stand back and admire the beauty. To lie is easy enough. You say something about a past event guided by convenience rather than accuracy. What then happens if you get caught? Some hardy blogger looked it up, wrote it up and the jig seems to be… well, up. Here is where the men are told from the boys. A Republican wuss will own up, fess up and pack up. Not a Clinton, no way. A Clinton will keep it up; more than that, dress it up. This is the fun part, where you tell a lie about why you lied that garners more sympathy than had the original lie stood. The second lie makes us feel bad that they had to lie the first time.

Bill did this constantly and skillfully. One classic example: he lied to say he had desperately tried to make a middle-class tax cut to cover the earlier lying promise that he would deliver such a cut. Most famously, he lied about why he lied about his relationship with Monica Lewinsky. He did it to be a gentleman, he explained, and any decent man in his position would have done the same; this, despite the fact that he told the lie in a courtroom in an effort to undo a suit against him for ungentlemanly conduct.

Remember this lesson, my friends. The art of being a good liar is in the second response. Who said not to dig a deeper hole for yourself? On the contrary, the deeper it is the more wiggle room you have. Who said not to compound a crime? Oh, no, you will collect compound interest. As Bill Clinton himself has often demonstrated on the golf course, with a little creativity you can always improve your lie. If at first you don’t succeed, lie, lie again. (“Hey, wait a second, Smith is not your real name!” “Yes, my real name is Jones, but since Jonestown my family is embarrassed.”)

If we believe Hillary’s latest, her mother not only told a false story about her naming, she obviously withheld the real story. Perhaps now when she scales the heights of the presidency, she will be rewarded with that bit of knowledge. You know the old Mount Everest joke. The teacher asks the kid where’s Mount Everest and the kid says he doesn’t know. “Then stand in the corner,” the teacher reprimands. After a few minutes there, the kid calls out: “Teacher, I still can’t see it.”

Hillary Rodham Clinton can see it lying there in all its splendor. Her quest answers the age-old question: Why lie about Mount Everest? Because it’s there.