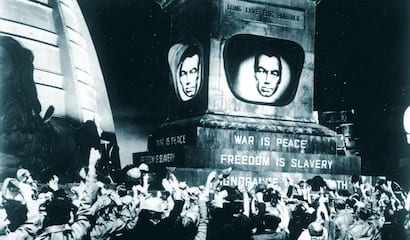 I SUSPECT THAT GEORGE ORWELL would not have wished his surname to become an eponym. My 1996 Chambers gives two definitions for the adjective “Orwellian”: “relating to or in the style of the English writer George Orwell (pseudonym of Eric Blair, 1903–50)” or “characteristic of the dehumanized authoritarian society depicted in his novel Nineteen Eighty-Four.” This second sense has become hackneyed: in the past month I have seen it applied to the president and his flip-flops, bureaucratese, the National Hockey League, the editorial page of the New York Times, social networking, the Republican Party, digital rights management technology, and the Governing Body of Jehovah’s Witnesses. “Orwellian” is now a surefire signal of cant or sloppy thinking, a meaningless word like “moderate” or “fascist.”

If we are to continue making use of “Orwellian,” I suggest that we do so in something like the former sense, that is, to identify a writer with the complex salade de fruits of habits, attachments, tics, and convictions that characterize the author of The Road to Wigan Pier. What made Orwell himself was his indigence, his wanderlust, his shabby clothes, his poor health, his love of fishing and gardening, his fondness for suet pudding and draught beer, his dogged devotion to P.G. Wodehouse and the Church of England, his unflagging physical courage, and his unfailing moral sense. Rod Dreher, Wendell Berry, and Theodore Dalrymple (whose travel memoirs, unfortunately out of print, are as good as Orwell’s early books) are all Orwellian writers.

The late Christopher Hitchens, who provides an uncharacteristically lackluster introduction to the American edition of Orwell’s Diaries, was witty, urbane, intrepid, a great many things, but never, one thinks, Orwellian. Sure, there are some obvious parallels, like their mutual love of smoking, but these are just that: obvious. I never met him, but I do not gather from his writing that Hitchens was ever one for drinking stout beer. (His spirit of choice, Johnnie Walker Black, is one that Orwell could not have afforded to drink at any point in his life.) Rarely did Hitchens express anything but contempt for Christianity. Orwell, by contrast, was a defender of the Anglican Church, albeit an enormously heterodox one, who helped his vicar bring Communion to the elderly and infirm and was buried in a country churchyard according to the rites of the 1662 Book of Common Prayer. One simply cannot envision Orwell feeling comfortable at a Condé Nast holiday gala: I like to imagine him showing up in an oversized Harris tweed, a gravy-stained shirt, and wrinkled wool trousers, complaining to anyone who will listen about the enormity of “holiday” usurping Christmas. Still, I suppose someone ought to be called the Orwell of our age, and why should it not be Hitchens, the best popular literary critic of the soixante-huitard set? (Orwell himself will probably never be given a place among the ranks of great critics, if only because of giants like F.R. Leavis, T.S. Eliot, and Cyril Connolly who walked the earth in his own day.)

Hitchens asserts in his introduction that the appearance of the diaries in book form “can greatly enrich our understanding of how Orwell transmuted the raw material of everyday experience into some of his best-known novels and polemics.” About this I am not so sure. Enormous portions of the diaries have already appeared in print, and not only as reworked by Orwell for later books and essays. The hop-picking diary, for example, can be found, minus editor Peter Davison’s not very illuminating notes, in the first volume of Orwell’s Collected Essays, Journalism, and Letters. Gavin Freeguard, deputy director of Britain’s most prestigious journalism award, the Orwell Prize, has been posting entries from the diaries on a WordPress blog for two years now. Scholars like Michael Shelden, author of the 1991 authorized biography of Orwell, have had access to the diaries for decades. Moreover, the majority of the entries, especially those dating from 1939 onward, do not involve Orwell’s work. Animal Farm and Nineteen Eighty-Four go almost unmentioned even while they are being written. Instead, Orwell plans his garden, reports on the vagaries of English weather, and catalogues his few possessions. He was apparently a great maker of lists. In a June 1940 entry, he indexes the advertisements appearing in an issue of the Sunday People, noting that

Of 9 food and drink adverts., 6 are for unnecessary luxuries. Of 29 adverts, for medicines, 19 are for things which are either fraudulent (baldness cured, etc.), more or less deleterious (Kruschen Salts, Bile Beans etc.), or the blackmail type (“Your child’s stomach needs magnesia”).

As the above suggests, Orwell had little patience for culinary fusspots or the health-obsessed, though by contemporary standards his own diet of garden strawberries and fresh fish seems fairly wholesome. (Less conducive to his flourishing was his 50-plus cigarette a day tobacco habit, a regimen that, while it places him among the upper echelons of British smokers, does not match that of such three- and four-pack per diem luminaries as the Right Hon. Michael Foot and Anthony Burgess.)

IF NOTHING ELSE, the present volume brings into somewhat better focus the picture of Orwell already on display in his own writing and in various biographies. With the Orwell centenary nearly 10 years behind us, its appearance also serves to elicit reconsiderations of the sort that tend to be of interest mainly to critics. Orwell’s literary reputation is secure. But what of his place in the Valhalla of fallen conservative warriors? The right’s attitude toward Orwell, especially in his native Britain, has always been somewhat ambivalent. For every Anthony Powell, who helped choose the hymns sung at Orwell’s funeral, there has been a Maurice Cowling. (Cowling once quipped that “Orwell had a nasty mind and, probably, a nasty body.”) In a 1999 National Review symposium on “The 100 Best Nonfiction Books of the Century,” Florence King called Orwell “Every conservative’s favorite liberal and every liberal’s favorite conservative.” This was a rare miss from a rare Miss. Never for a moment was Orwell a liberal in either the classical or contemporary sense of the word. Till 1934, he called himself a “Tory anarchist,” a self-designation he later replaced with “democratic socialist.” Orwell’s professed socialism is something from which his conservative admirers typically shy away, like Mencken’s social Darwinism.

Unlike the Sage of Baltimore’s eugenicist tendencies, however, I think that conservatives can embrace Orwell’s “socialism,” at least in part. The author of The Lion and the Unicorn had no desire to “fundamentally transform” England. Instead he sought to preserve the things that he loved most about her, namely, her language, literature, religion, landscape, and cookery. (This caused him to be very soft on the monarchy, doubtless to the chagrin of latter-day republican admirers like Hitchens.) Orwell’s idiosyncratic socialism, with its roots in Blake’s “Jerusalem” and Ruskin’s Praeterita, was a proposed Disraelian alliance of journalists, poets, and novelists, the aristocrats of the mind, with the working class. It meant Old Etonians like himself having common cause with tobacco-chewing coal miners.

In the last chapter of his authorized biography, Michael Shelden summarizes Orwell’s hopes for his country. I do not think that in as many words I could give a better idea of Orwell’s politics (if one can stand sullying such iridescent dreams with that ugly noun), so I shall quote it in full:

There must be a place in the modern world for things that have no power associated with them, things that are not meant to advance someone’s cause, or to make someone’s fortune. There must be room, in other words, for paperweights and fishing rods and penny sweets and leather hammers used as children’s toys. And there must be time for wandering among old churchyards and making the perfect cup of tea and balancing caterpillars on a stick and falling in love.