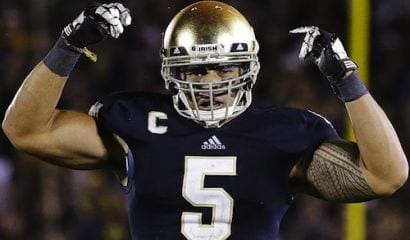 More Politics
Sign up to receive our latest updates!
Register
Hot Off
The Press
Another Perspective
The GOP’s Social Security Suicide Mission
by Keith Naughton
In Print Fall 2022
Serious and Funny
by Byron York
Ben Stein's Diary
Weekend Sadness
by Ben Stein
Biden Watch
The Biden With His Hand Out
by Debra J. Saunders
Buy the Book
Edgar Allan Poe’s Love-Hate Relationship With the City
by Leonora Cravotta

Before World War II, college football did not allow free substitution of players. So, players played on both defense and offense. During World War II, with the best players in the armed services, the football rules were altered to allow unlimited substitution, permitting coaches to take advantage of the particular skills of the players. In 1945 the University of Michigan was the first to exploit the rule by employing the “two-platoon system” in which some players played only defense and some only offense.

This unlimited substitution rule that allowed the two-platoon system was repealed in 1954 but re-enacted for the 1965 season. It has remained in place since that season. And now we speak even of a third platoon — the “special teams” unit.

In the succeeding years, various rules have been changed that have unwittingly or wittingly promoted offensive scoring. These include rules on how quarterbacks are treated, how offensive linemen may use their hands, how much contact may occur between the defense and receivers. And, it is claimed that some college coaches place their best athletes on offense.

It was into this environment that a 2009 graduate of the private Punahou School on Hawai’i (the same school from which President Obama graduated in 1979) joined the football team at the University of Notre Dame to play linebacker, a position on defense: Manti Te’o (pronounced “man-tie tay-oh”). You may have heard of him in connection with the Heisman Trophy Award made on December 8 in which he placed second. He finished with 321 first-place votes and 1,706 points — the most ever by a defensive player in college football history and the second-highest for a runner-up.

The Heisman is considered the most prestigious in college football. Although it is colloquially regarded as being made to the most outstanding college football player, the specific wording is “the outstanding college football player whose performance best exhibits the pursuit of excellence with integrity.” Te’o made news because there have been few defensive player Heisman finalists since the defensive/offensive split of 1965, indeed since the Award’s conception in 1935. Only two defensive players have won the Heisman: Syracuse’s Ernie Davis in 1961 who played offense and defense, and Michigan’s Charles Woodson in 1997. No lineman has ever received the award. Given that record, the Heisman is de facto an award to an offensive skills player (quarterback, running back, receiver, tight end).

Given all of the hype surrounding the Heisman, it is easy to overlook all of the other awards made to college football players. And here, the star of Te’o shines ever so brightly. Based on the position he played, Te’o was eligible to receive 13 awards, the Heisman being just one of them. He won ten! (I can hear President Obama exclaiming, even about a fellow alumnus, that it is not “fair” that one person should win so many, that the accolades should be distributed more fairly.) The ten he won are:

Admittedly, some of these awards were established fairly recently. Nonetheless, no other player at any position has ever received more than five major awards in college football history.

What did Te’o do on the field? In the 2012 season as a senior, Te’o had 103 total tackles (solo and assist); 5.5 of them were tackles for loss (TFL) of 19 yards. He had 1.5 sacks for a loss of 13 yards. He missed two tackles all season. He had 7 interceptions, recovered two fumbles, and hurried passers that resulted in two interceptions.

Okay, how does this compare to anyone else this season?

Turnovers: His nine turnovers are tied for the lead in the FBS (Football Bowl Subdivision schools). Interceptions: His 7 interceptions tied him for third among all defenders in the FBS. Among linebackers, he led the FBS and they were the most by any FBS linebacker since 2001. Arguably, he is the most improved linebacker this season since he had no interceptions in his college games before this season.

How does Te’o compare at Notre Dame? Tackles: His next best teammate this season had 3 fewer tackles per game. In his career, Te’o had 427 total tackles (solos and assists). This places him third all-time behind Bob Crable (521, 1978–81) and Bob Golic (479, 1975–78). Only Te’o and Crable had 100-plus tackles in three consecutive seasons. Interceptions: Te’o has the Notre Dame record for interceptions by a linebacker in a single season.

There are, of course, the intangibles, the difficult-to-measure metrics. Football is a team sport. No player can achieve much without successful teammates. For example, rookie quarterbacks are typically drafted onto failing NFL teams that have poor offensive lines. (So, it is odd that a December 15 Washington Post story on this year’s stellar NFL rookie quarterbacks failed to mention their offensive lines.) Te’o, a team captain, led the No. 1 defense in the country: No. 1 in points allowed per game (10.3), No. 6 in yards/game allowed, No. 17 in turnover margin per game, No. 18 with 34 sacks for the season, No. 19 with 16 interceptions.

The Notre Dame-Alabama BCS National Championship on Monday, January 7, promises to be a defensive struggle. Alabama’s defense is ranked No. 2. The game will be held in Sun Life Stadium. Although it is an outdoor stadium, one can hope that the game will not be a soaked slugfest like the “mud bowl” of the November 2007 match between the Steelers and the Dolphins in Pittsburgh, won by the Steelers 3-0 on a field goal with 17 seconds remaining.

Te’o is eligible for one more award following the game. An MVP is awarded to an offensive player and to a defensive player. Even should Notre Dame lose, he could garner the award, just as Chuck Howley, a Dallas Cowboys linebaker, won the 1971 Super Bowl MVP although Dallas lost.