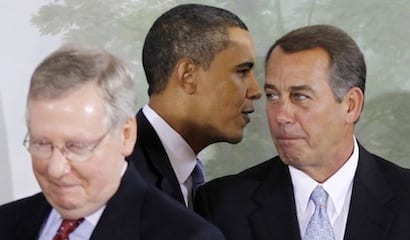 In the end, only 85 House Republicans rallied to support Barack Obama.

One hundred fifty-one House Republicans flatly refused to go along.

Launching stories like this one over at Newsmax that House Speaker John Boehner was losing support for his own re-election as Speaker.

What was Obama doing that set off such a hot reaction from all those House Republicans?

That’s right. Directly breaking his word and all his campaign hokum about the middle class, Obama broke his word. Safely re-elected, with no more elections to run in, Obama targeted the middle class.

Not to be ungracious and say “told you so”…but told you so.

Astonishingly, led by Speaker Boehner the 85 GOP House members went along with Obama because they were afraid to stand up to the President on principle.

Why? Because, went multiples of press reports, these 85 House Republicans were terrified of being blamed by the President and his liberal media allies for “going over the cliff.”

Both the House and Senate GOP have won the Barack Obama Participation Trophy.

Tell me again why these people should keep their jobs in 2014?

Doubtless you’ve heard of the “Participation Trophy” and how one “wins” one of these things.

The Absolute Jewel participated! So while he/she may not have been named the sport’s MVP or the best second baseman or running back or hockey goalie or whatever — he/she gets that ultimate award: The Participation Trophy. Along with every single one of his/her teammates.

Lest you think we jest about the psychology linking Participation Trophies and those 85 House Republicans, over the border in Canada the Toronto Star reported this:

Two sets of parents are suing the Greater Toronto Hockey League, one of its clubs and four coaches for $25,000 each because their sons were cut by the Avalanche Minor Sports Club midget junior A team during tryouts in April.

Vito Valela and David Longo are both suing on behalf of their sons, Christopher and Daniel respectively. Besides the GTHL, Avalanche Minor Sports president Anthony Iantorno as well as team officials Doriano Pistarelli, Andy Vandenberk, Felice Guglielmi and Peter Posca are named as defendants in the action.

“Their direct actions have caused irreparable psychological damage to Daniel Longo’s self esteem as an impressionable teenager and demoralized Daniel as an athlete and team hockey player with his peers,” the Longo statement of claim reads. “The conduct by all defendants destroyed the dignity of my son, whom in good conscience gave his team nothing but his best efforts.”

Valela’s statement of claim states: “When Christopher was advised of his termination by my wife and I, he vowed never to play the game he loved since childhood. And, moreover, his misguided group of defendants demoralized my wife and I, whom had gone well beyond the call of duty as parents in support of the Toronto Avalanche hockey team for two seasons.”

Think of the House and Senate Republicans who went along with Obama as the boys reported here in this news story.

Think of the horror of blame that would have attached itself to these poor Republican politicians. You can just imagine the horrific news stories these guys were dreading, written, presumably, like this:

President Obama’s direct actions have caused irreparable psychological damage to Senate and House Republican’s self-esteem. As impressionable members of Congress and demoralized Republican elected officials, the Republicans believe their reputations and re-electability with their constituents, congressional, liberal media and Georgetown dinner party peers has been severely damaged. The conduct threatened by President Obama’s liberal media allies would have destroyed the dignity of these congressmen and senators, who in good conscience gave their constituents nothing but their best efforts.

What “Participation Trophies” are about is avoiding consequences.

The obvious and inevitable result of being held accountable for performance. There is, in fact, no sin in not being as good an athlete as the next kid. There is no sin either in standing up for principle as a Congressman or Senator. Yet to avoid giving the player in question the alleged shame of not making the team — being thought of as someone who isn’t one of the guys or girls — the coaches or league award all players a “participation trophy.” Who cares if they can’t make the cut as a first baseman, running back, or goalie? They played!

John Boehner played. Mitch McConnell played. And in return, they got played.

So… they caved. In avoiding the fiscal cliff, led with flags flying by Speaker Boehner, those 85 GOP House members went over the credibility cliff. Including — of all people — Congressman Paul Ryan. The headlong flight from blame necessitating a flight from principle as well.

In short, these House and Senate members let themselves be bullied by the president and his media cronies into believing that they would get the blame for what came next.

But, of course, the question. What does come next? By going along with the president, what does this Obama Participation Trophy win the GOP?

The Wall Street Journal was kind enough to add up a few of the tax increase gems from both the fiscal cliff legislation passed on New Year’s Day as well as the Affordable Care Act, aka Obamacare.

Let’s start with the Obama tax increase on the middle class. Otherwise known as: The Payroll Tax

So. You really believed this was all about taxing the “rich”, did you? Congratulations. You didn’t even know your name had been changed to “Donald Trump” did you? Too bad. As noted in USA Today:

About 77% of American households will face higher federal taxes in 2013 under the agreement negotiated between President Obama and Senate Republicans, estimates the Tax Policy Center, a nonpartisan Washington research group.

That’s because even though just 1% of households will pay higher income taxes, an increase in federal payroll taxes will hit nearly every wage earner, the Tax Policy Center says.

Congratulations Speaker Boehner and Senator McConnell! You have signed on to not only a veto of economic growth, you have agreed to a tax on the middle class.

Then again, why the surprise?

This is precisely what common sense, not to mention experience with moderate Republicans whose main objective is placating liberal critics rather than sticking with principle, dictates.

Taxing the rich is never enough. The real money in America comes from the great American middle class. And so Obama, behind closed doors with John Boehner and Mitch McConnell, behaved like the liberal he is.

He taxed the middle class. And out of fear, Boehner and McConnell went along. They wanted that Participation Trophy from Obama and the national media.

The President’s message post-election to those goofballs who voted for Obama because he was looking out for the middle class? They will quickly learn they have been played. Sorry, suckers! Gotcha!

As this article was heading for the cyber presses, Speaker Boehner still held his job and presumably could be expected to hold onto it.

Which raises the question: As House and Senate Republicans face the question of raising the debt limit, will they finally stand and fight?

Or will they run from the inevitable consequences of opposing Obamanomics?

What is more important for the country? Going along with taxes on the middle class and the “rich”? After decades of principle about not raising taxes on anyone, period? Whether they are the manufacturers of medical devices, the “rich,” or the middle class?

Or allowing oneself to be bullied by a leftist president who is pulling one of the oldest cons in the political world — raising taxes on everybody by targeting the rich.

We shall see, yes?

And come 2014, we will see what Republican voters have to say about House and Senate Republicans who have voted to raise their taxes — after presumably promising not to do just that.

Once suspects they will not be handing out Participation Trophies.