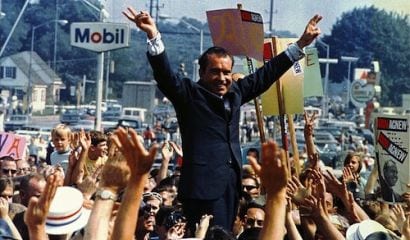 Thursday
One hundred years ago, as of January 9, in a small home in Yorba Linda, a suburb of Los Angeles, Richard Nixon was born in a house his father built.

Without family connections, without family money, with a natural shyness, he became a U.S. Representative when he was in his early 30s, and a U.S. Senator very shortly afterwards, and then Vice President to Dwight Eisenhower from 1953-61.

He lost a squeaker of an election that many observers believe was stolen by the Chicago Democratic machine in 1960 to John F. Kennedy. He then traveled the world, practiced law, wrote and came roaring back to win the White House in 1968, against a genuinely great man, Hubert Humphrey, and then win re-election by the widest margin in history against George McGovern in 1972.

He was always a controversial figure, falsely painted as a smear artist and a witch hunting McCarthyite by a media and academic class that loathed him with an abiding hatred.

During his campaign in 1972, serious wrongs were done by his people, and he connived to cover them up, and then tried to cover that up. For that, and for the residual hatred the beautiful people had always felt towards him, he was tormented, tortured, impeached, and finally made to leave office in August of 1974. My father at that time was his chief economic adviser and I was by then a very junior speechwriter for him. If you look carefully at the tape of his address to the White House staff the day he resigned, you can see me chewing gum and crying while my parents looked on, grief stricken, a few feet away.

I have looked up to Richard Nixon all of my life and still do, and I always will. And if I were to say why, I would say, as briefly as possible:

Despite every possible obstacle put in his path by his enemies, always with an obstructionist Congress, he brought us the EPA, desegregated the last holdout Deep South school districts, enormously promoted equal opportunity hiring for black people on federal projects. He was also the first President to send to Congress proposed legislation for universal health care. I wrote the message sending it to the Hill long ago when I was young. He was also the only GOP President ever to support the ERA. Also the last GOP President to have a balanced budget.

But far more than that, he was a peacemaker. He ended the war in Vietnam, brought home the POWs, saved Israel from having to use nuclear weapons to survive in the Yom Kippur War, signed the first strategic arms limitation treaty with the former Soviet Union, and, of course, opened up China. This last one made the Cold War unwinnable for the Soviets, setting the stage for the end of that entity, and opened up vistas of unimaginable prosperity for the Chinese people. He was by far the best friend that the friends of peace have ever had. He was by a million miles the best friend the Jewish people have ever had in high office anywhere in the Western world.

Friends here in Hollywood, close relatives, colleagues, have asked me for decades how I can still love Nixon, after Watergate, after his questionable comments about Jews on tape, and I have an answer.

Ben Stein
Follow Their Stories:
View More
Ben Stein is a writer, actor, economist, and lawyer living in Beverly Hills and Malibu. He writes “Ben Stein’s Diary” for every issue of The American Spectator.
Most Popular
1
The Right Prescription
Judge Rewrites Georgia Law to Favor Warnock
by David Catron