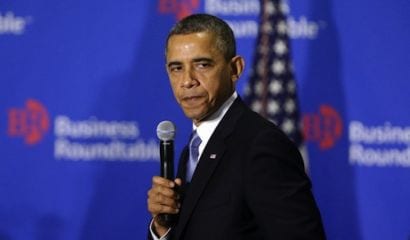 Article 1 Sect 7 of the U.S. Constitution begins, “All bills for raising revenue shall originate in the House of Representatives.” The framers put the House in charge of taxes, because House members — elected every two years from small districts — would be the first to know if a tax were unfair or burdensome. House Republicans who voted for the fiscal cliff bill despite its being stuffed with tax favors for Hollywood, alternative energy companies, and the President’s other favorite constituents, disgraced this mandate. Whatever Americans think about raising taxes, they agree that paying higher taxes to fund costly giveaways for political insiders is morally repugnant.

President Obama poses as the morally superior politician, compelling millionaires to pay their fair share. On January 1, when the fiscal cliff bill reached the House, Speaker John Boehner should have held up all 48 pages of favors requested by the president on live television and called on the President to strip them from the bill. It would have shaken Obama from atop his moral pedestal. Whether the demand was met or not, it should have been made.

Democrats and Republicans will have three more fiscal fights in the coming days, over the debt ceiling, the automatic spending cuts known as sequestration scheduled for March 1, and a federal budget bill due on March 27. A Pew poll released January 7 suggests that only 19% of Americans approve of the way GOP leaders handled the crisis. Obama painted them as obstructionists. Reviewing the battle provides lessons for the coming fights.

As White House and GOP leaders met behind closed doors, outlines of a deal included raising income and capital gains taxes on high earners, allowing payroll taxes to rise on all workers, postponing previously agreed to automatic spending cuts, and extending unemployment benefits. But only 30 of the bill’s 157 pages dealt with these issues. Dealmakers packed them into a typical omnibus bill crammed full of unrelated items as well as the favors the president demanded.

Senator Tom Coburn (R-OK) wrote the President urging him to drop the demand “before any American is asked to pay a penny more in taxes.” But Vice President Joe Biden and Senate Minority Leader Mitch McConnell, the two who hammered out an agreement as the ball was dropping on 2012, were tone deaf to the outrage of larding up emergency fiscal legislation with special gifts to corporate interests and campaign contributors. The favors, estimated to cost $40 billion in revenue, will consume two thirds of the additional tax revenue produced by the deal in the first year.

Boehner failed to attack this outrage and seize the moral high ground from Obama on January 1. Had Boehner publicly assailed the president’s demands, it would not have changed the terms of the deal, but Obama would have gained far less political capital from the outcome.

Ironically, later the same day, the Speaker took a principled stand against the Superstorm Sandy relief bill because it was crammed with spending unrelated to helping East Coast storm victims. Not surprising. Boehner made his congressional career opposing earmarks to benefit one congressional district. For decades layering a bill with earmarks was the way to get it passed, whether it was good for the country or not. The House agreed to end earmarks in 2010, when Boehner became Speaker. But omnibus bills are still routinely voted on without being read.

Instead of bringing the $60.4 billion Sandy-relief bill to a vote, Boehner offered a $9.7 billion flood insurance bill, a first installment for storm victims. Republican bigs such as Governor Chris Christie of New Jersey lashed out at Boehner, accusing him of anti-Northeast bias. Wrong. A politician who stands up against wasteful government spending should be hailed as a hero.

It’s not too late for House Republicans to seize the mantle of moral leadership. When the President demands more revenue by closing loopholes and capping deductions, Republicans should demand repeal of favors just pocketed by the President. When Obama and Senate Democrats bring another larded-up omnibus bill to the House, Boehner should rip it up and say the public wants a short bill in plain English that members of Congress will read before voting.