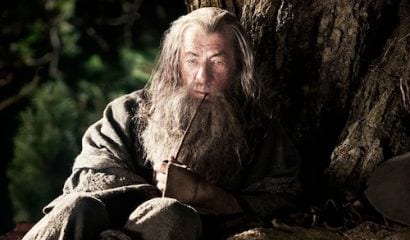 After being a prey to conflicting hopes and fears, I award The Hobbit a healthy 8, perhaps 8.5, out of ten.

The complaints first: like the films of The Lord of the Rings, some of the vertical scenery is impossibly exaggerated, and there is a feeling a little too often that things have gone over the top.

These include the battle of the storm-giants and the size of the vast underground Goblin city, which seems to hold a population the size of that of New York at least. Even in Middle Earth, every precipice does not have to be about 1,000 feet high. On the other hand, can one really complain about this?

Where the book of The Hobbit tells us that Goblins can “tunnel and mine as well as any but the most skilled dwarves,” in the film the Goblin city is all a crazy, Heath Robinson affair, which tends to diminish the Goblins into comic figures.

Later, when the Hobbit and the Wizard Gandalf take refuge up a tree, from goblins and giant wolves, the tree has to be poised precariously on the edge of an unfathomable precipice. The scene in the book, where this happens in an evil glade in a wood, is quite tense enough.

It is a pity that at the beginning the exact wording of Bilbo’s proposed contract with the Dwarves to join them on their hunt for a dragon-guarded treasure (Gandalf has led them to mistakenly believe that the Hobbit is an expert burglar) is left out. In the original it reads with, for the reader, sardonic humor and a glimpse into Dwarvish business practices that any funeral expenses will be met “by us or our representatives, if the matter is not otherwise arranged for” – translated, as soon as Bilbo thinks about it, as: “You and we may all die and also be eaten.” Perhaps a few more pauses in the action to take in the marvelous New Zealand scenery would also be a good idea.

Apart from this, there is very little to complain about: the wizard Radagast, who is hardly mentioned on the books, gets a somewhat bigger role, and one that fits well into the story, as do the appearances of the chief Wizard Saruman and the Elf Queen Galadrial, who in the books do not appear at all until The Lord of the Rings.

The misery of Gollum, the hobbit ruined by long possession of the accursed Ring, sneaking about the slimy lake below the Goblin tunnels to seize fish or any unwary goblin he can come upon from behind, is well captured, and hints at the pivotal role he will unexpectedly play in The Lord of the Rings.

The early scenes in the Shire and Bilbo’s snug little Hobbit-hole capture the atmosphere of rustic peace with which the story opens perfectly. Gandalf at first appears as a wandering, eccentric conjurer, only very gradually transforming into a figure of power and awe.

The Dwarves are a creative triumph. When I first read The Hobbit I imagined them as all rather alike and rather comic. In fact, they show a great range of personalities and appearances, and no one could mistake the leader, Thorin Oakenshield, for anything but a grim and proud warrior. While I was glad a few Dwarvish songs have been preserved from the book, I was surprised by their gentle, wistful note.

The ruins of Dol Guldur, the ancient fortress now occupied by evil spirits, have an appropriately ghastly look, especially set against the Hobbits’ Shire and Rivendel, one of the last surviving fortresses of the good people.

Two crucial moments in Bilbo’s “growing up” are well done. The first when, the morning after having adamantly refused to join the Dwarves on their mad adventure, something in him stirs and he flings everything aside and runs to follow them. The second is when, for the first time, he draws his new sword alone against a hideous enemy. After all, the Wizard had sent him on this adventure because he had found to his dismay that Hobbits had become greedy, fat, and complacent, and in no shape to survive the storms that were about to beat upon the Earth.

The battle scenes, as in The Lord of the Rings, are magnificent, though some may find them overly violent for children.

We hardly see Smaug the dragon yet, but I have a feeling that this will not be the case in the succeeding films.

Overall, The Hobbit lifts the heart, shows evil can be defeated, and, like its great successor, makes one’s belt feel a little light without the weight of a good sword on it.