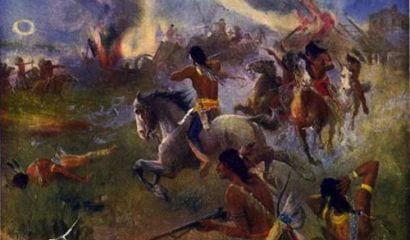 Recently a blog for liberal Episcopalians commemorated the 150th anniversary of the 38 Dakota Indians hanged on December 26, 1862, on the orders of President Abraham Lincoln. Titled: “Remembering the martyrs of Mankato,” the blogger rued how these Indians were executed in Mankato, Minnesota, for their role in the Dakota War of 1862. Originally 303 were scheduled to hang. But Lincoln personally reviewed their cases and reduced the number by nearly 90 percent. On December 26, 2012, several hundred gathered in Mankato to dedicate a memorial to the 38 who were executed.

The liberal Episcopal blogger pondered the irony of Lincoln the Emancipator ordering these executions. Of course, the blogger did not acknowledge the horrific atrocities that prompted the hangings. Instead, he described the reverent crowd for the new monument. And he quoted an Episcopal priest and artist of tribal background named Robert Two Bulls who blogged in 2011 about his painting of Minnesota’s first Episcopal bishop, who had intervened for the condemned Dakota warriors with President Lincoln. The painting was part of a Minneapolis exhibit about the Indian response to the 150th anniversary of Minnesota’s statehood several years ago.

Rev. Two Bulls recalled that the 1862 hangings are still “painfully felt and remembered in my Dakota brothers’ and sisters’ hearts and minds.” And he lamented how executions in that era were often a “cheap form of entertainment.” He called the hanging of 38 men “still mind-boggling, frightening, and is probably a world-record.” Two Bulls wondered whether the weeping Episcopal bishop portrayed in his painting, Henry Benjamin Whipple, was “hero or villain” for persuading Lincoln to intervene but not rescuing all of the convicted from hanging. Rev. Two Bulls asked: “As a man of the cloth, should Bishop Whipple have lobbied harder with Lincoln to have all 303 sentences commuted?” Two Bulls also asserted that 37 of the 38 hanged were baptized in Christian churches, some Episcopalian. “And contrary to popular belief, as they walked to the gallows they sang a Christian hymn in the Dakota language and not a ‘death song,’” he recalled. “Might we now consider them to be Christian Martyrs and Saints?”

Looking towards the 2012 commemoration of the hangings, Rev. Two Bulls wrote that a “few of us in the clergy are beginning a process of reconciliation between both Native and non-Native peoples in Minnesota and in the Episcopal Church.” After all, “as Episcopalians we cannot sit back and do nothing, as it is part of our history that needs to be addressed and understood more clearly today.” And he concluded: “It is my vision, as both artist and priest, that only good things will emerge as we do this work of reconciliation together.”

The current Episcopal Bishop of Minnesota wrote a couple weeks ago of the 150th anniversary of the Mankato hangings. Citing the “guilt, many still feel, or the shame,” Bishop Brian Prior urged “honoring those who died — and remembering the place that our own US Government played in these deaths.” Like Rev. Two Bulls and the Episcopal blogger, the bishop declined to describe for what the condemned men were hanged, instead assuming they were not just hapless victims of a cruel U.S. Government but also seemingly “martyrs” who deserve “honoring.” In his blog, the bishop did not mention any victims of the Dakota warriors.

Dakota warriors began attacking Minnesota settlements in August 1862 as they resisted assimilation and suffered hardships. Payments that the U.S. Government owed the tribe according to treaty were late, thanks partly to the Civil War. The subsequent Dakota War, which started when Dakota warriors killed five Minnesota settlers, lasted a little more than a month. According to the Minnesota Historical Society website, more than 600 Minnesotans were killed by the Dakota, of whom just over 70 were soldiers and another 50 were armed civilians. “The others were unarmed civilians–mostly young men, women, and children who were recent immigrants to Minnesota.” An estimated 30 percent of the civilians were children aged ten and under.

The outrage from U.S. persons was of course intense. General John Pope, whom President Lincoln dispatched to Minnesota after Pope’s disaster at Second Bull Run, wrote: “The horrible massacres of women and children and the outrageous abuse of female prisoners, still alive, call for punishment beyond human power to inflict.” Pope, often intemperate in language, urged regarding the Dakota “maniacs or wild beasts, and by no means as people with whom treaties or compromises can be made.”

In November 1862, a military commission tried 392 Dakota warriors, awarding death sentences to 303 and prison terms to 16. Of about 6,500 Dakota in Minnesota, an estimated 1,000 participated in the war. President Lincoln later reviewed the cases and explained he was “anxious to not act with so much clemency as to encourage another outbreak on one hand, nor with so much severity as to be real cruelty on the other.” He agreed to the hanging of Dakota guilty of “violating females” or murdering civilians. His sparing so many Dakota warriors was hugely unpopular, prompting him to explain: “I could not afford to hang men for votes.”

The stories of Dakota atrocities during this conflict included this account: “The daughter of Mr. Schwandt, enceinte [pregnant], was cut open, as was learned afterward, the child taken alive from the mother, and nailed to a tree. The son of Mr. Schwandt, aged thirteen years, who had been beaten by the Indians, until dead, as was supposed, was present, and saw the entire tragedy. He saw the child taken alive from the body of his sister, Mrs. Waltz, and nailed to a tree in the yard. It struggled some time after the nails were driven through it! This occurred in the forenoon of Monday, 18th of August, 1862.”

Political correctness, religious and secular, seems to offer little to no sympathy for the mostly immigrant farmers whose families were debauched, tortured and massacred in late 1862. They had left Europe to risk everything on a distant and windswept frontier. And for the most part, they were not complicit in U.S. Government failures towards the Dakotas. Evidently liberal Episcopalians are only sympathetic to immigrants of 2012 but not of 1862.

As to calling the Dakota warriors hanged for atrocities “Christian martyrs and saints,” it’s not clear if this exaltation is based on a belief in their complete innocence of atrocities or justification for those crimes. If the hanged 38 Dakota did not murder and mutilate hundreds of civilians, then who did? Was any punishment appropriate? Would liberal Episcopalians defend as “martyrs” modern U.S. soldiers guilty of torturing and murdering pregnant women and children? Or does political correctness only excuse atrocities by indigenous people while demanding punishment for European-influenced cultures?

Ignoring atrocities against the victims of the Dakota War does no favors to history or the Dakota people. Liberal Episcopalians and other warriors for political correctness seem more interested in their own ideological crusades than genuine reconciliation or remembrance.