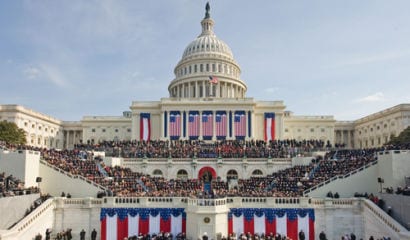 The second inauguration of our sitting president will take place this coming weekend as this is being written. It is a time of great happiness for most of my neighbors and friends inside the beltway, indeed for most people in the country.

But I find myself in despair for our beloved country. It is quite likely that a large minority of the nation’s citizens agree with my pessimistic mood. The reasons for that despair are not difficult to discern.

Our beloved country is in terrible condition. The awful evidence is easily seen everywhere, for those willing to look. Our economic situation is unsustainable. Yes, the government of the richest country in the history of the world is, by all reliable measures, broke. Our national government cannot pay its bills and every day sinks deeper in debt because it is addicted to spending at extravagant rates. We are on our way to becoming the sad equivalent of Greece or another failed state.

There is plenty of blame to pass around for this condition and it should be shared by Democrats and Republicans, by George Bush and by Barack Obama, but the major part of the blame must be placed squarely on the shoulders of Mr. Obama and his administration. He has been in power for four years and he promised that he would deal with all of our major problems. He has not done so.

To put fine point on the matter, our president terrifies me, even though during most of my life I have been a liberal Democrat and voted for him in his first election.

If viewed honestly his first term has been an unmitigated disaster. The national debt is at an historic high. So is unemployment. Despite these sad, undeniable facts, he was elected to another term. That of course is typical of his history for much of his life. He is a master politician of the Chicago school and yet a disaster as a manager and practical leader.

His political skills helped him get selected as the editor of the prestigious Harvard Law Review. Yet he proved a failure as the leader of that publication. There is no evidence that he authored one written comment or publication during his entire tenure.

His political skills also led to his election in 1996 to the Illinois State Senate where his work there was without any sign of major distinction. Often, he voted “present” rather than show the guts to fight for significant new laws.

Despite this lackluster record in Illinois, his political savvy led to his election to the United States Senate in 2004. His record in the Senate was equally without distinction in part because he spent most of his time there running for president. Yet, he was elected president in 2008 and, as I said, I voted for him. Like many millions of citizens, I managed to overcome my disgust at his association with his bigoted, racist, anti-Semitic pastor, Jeremiah Wright.

Yet, again his political mastery has again produced a situation in which he is given credit for being a good leader and the press and the public are placing the lion’s share of the blame for our dire economic situation on Congress and the Republicans.

If history is to be repeated, which is likely, somehow the country will move beyond the fiscal cliff and Barack Obama will move forward with governing the country while basking in the warm glow of press and public applause.

And again if history prevails, he will be a disaster in his second term as he was in the first. Race relations will continue to get worse under his leadership; so will black crime. The nation’s status in foreign affairs will also continue to deteriorate. Israel will continue to be treated as the major problem in the Middle East rather than our most trusted and valuable ally in the region and the world. The master politician will continue to be a failure as a leader and manager — and all the while he will be applauded as a great chief executive by the slavish major media and by a majority of the public.

When the country finally collapses in a sea of debt and red ink, or even in a race war, neither he nor his Democratic Party will be blamed. It is likely that another Democrat will be elected to the White House in 2016.

Those in brief are the reasons why I am in despair and why we all should despair for our wonderful country as the inauguration day approaches.

I pray that my pessimistic forecasts do not prove to be true in the near future, but I fear that the forces of history do not allow for much hope in this regard — except in one way. If millions of good Americans agree with these awful forecasts then perhaps — just perhaps — there will be a groundswell of popular demand that drastic measures must be taken very soon to change the disastrous direction of the precious American nation.