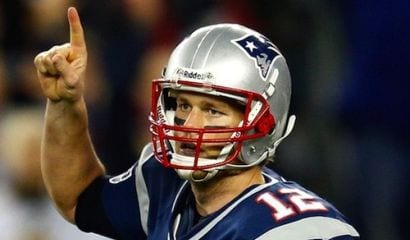 Nate Silver became famous for his political prognostication, but his Super Bowl prediction this year can be no better than half right: he called for a match between the Seattle Seahawks and the New England Patriots.

“I think that if you have a Denver-New England AFC Championship Game, that might be one of those cases where that’s the de facto Super Bowl,” Silver observed. Why couldn’t his crystal ball have been so foggy when it came to the presidential election?

Manning’s Denver Broncos were eliminated in their first playoff game, after the former Indianapolis Colt led them to a 13-3 record and AFC West division title. He tossed an errant pass that was intercepted just before double overtime, setting up the Baltimore Ravens in field goal range.

Rodgers led his Green Bay Packers to the top of the NFC North, beating division rivals during wild card weekend. But the team’s inconsistent offensive line and lackluster defense finally caught up with him. Rodgers and the Packers are out of the playoffs.

Drew Brees, Eli Manning, Ben Roethlisberger — none of them even led their teams to the postseason this year in the first place. Promising rookies like Andrew Luck, Robert Griffin III, and now Russell Wilson have all gone home.

Brady and his Patriots still stand. Playing against the vaunted pass rush of the Houston Texans, he was 25 of 40 for 344 yards, three touchdowns, and no interceptions. Brady has passed his boyhood hero Joe Montana for the most playoff wins by a quarterback.

Over the course of the 2012 season, Brady threw for more yards than either Rodgers or the elder Manning. He threw fewer interceptions than Manning and as many as Rodgers. His 34 touchdowns were ranked fourth in the league.

Since Spygate, Brady has appeared in the Super Bowl twice and has had his five best statistical seasons. He has been to the playoffs every year. The only season since 2002 where the Patriots didn’t make the playoffs, Brady was injured and not playing.

Brady is now 35. His best regular seasons, and two of his five Super Bowl appearances, have come since he turned 30. In 2007, he led the Patriots to 16 regular season wins and threw 50 touchdowns. In 2010, he threw just four interceptions.

Can Brady win a fourth Super Bowl? Since the disappointment of 2007, when the New York Giants shattered his perfect season, he has been getting closer every year. The Patriots were bounced from the playoffs in the wildcard round in 2009. They won a first-round bye only to be eliminated in the divisional round in 2010. They made it to the Super Bowl but lost their rematch with the Giants for the 2011 season.

Perhaps Brady would have won that Super Bowl if he had a healthy Rob Gronkowski. He likely would have gone to the big game and won if Deion Branch had stayed with the team for its AFC Championship run in 2006. Maybe if he had stayed healthy in 2008.

Gronkowski is injured again, unavailable even in a limited role. Baltimore’s Joe Flacco, whose Ravens the Patriots play next, has developed into a good deep ball quarterback, with a very solid set of receivers, as he prepares to lead a team that wants to help retiring Ray Lewis earn one more ring. The 49ers and Falcons are serious obstacles as well. The former just recently beat the Patriots, while the latter just won their first playoff game. Flacco, Matt Ryan, Colin Kaepernick — these are some the names vying to be the league’s next Brady. They will each have a chance. The NFL would love a quarterback on that level after Brady and Manning are retired.

But the Brady era isn’t over just yet. He is gunning for another of Montana’s milestones: four Super Bowl wins. He has his chances, too.