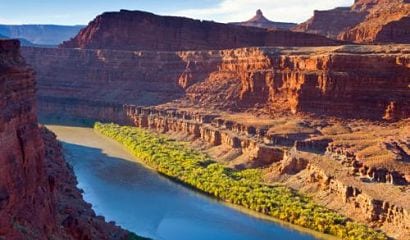 River Notes: A Natural and Human History of the Colorado
By Wade Davis
(Island Press, 176 pages, $22.95)

The Colorado River holds a special place in the minds of people who know rivers because of its ambiguous wildness. Other than the dams built on it for water storage and hydroelectric power, and people recreating on it, it is a river devoid of commercial uses. After issuing from the Colorado Rockies its 1,450 miles mostly drain a harsh landscape of deserts and canyons known as the Colorado Plateau. Unlike along the Mississippi, the Missouri, and the Ohio, no one ever built a city on it to take advantage of its commerce. No naval fleet ever cruised its waters to achieve a strategic advantage in war. Wade Davis’s short (and one-sided) River Notes examines the geologic and human history of the red and turbid “American Nile.” Davis is “Explorer-in-Residence” for the National Geographic Society and also the author of Into the Silence (2011), about the alpinist George Mallory climbing and dying on Mount Everest in 1924.

The Colorado found its usefulness when American Manifest Destiny settled the Southwest, and demanded water to make a go of it. Irrigation is almost unheard of in the east, but in the arid west it is essential to growing anything, or to quenching the thirst of people and livestock. Today the Colorado — despite its wild stretches through the Grand Canyon and other scenic wonders — sports 25 dams. The water needs of a regional population of 30 million depends on them. Cities such as Los Angeles, San Diego, Las Vegas, and Phoenix would be uninhabitable without them. The Phoenix metropolitan area has over 100 golf courses that need to be watered. And how many thousands of swimming pools dot the Southern California landscape? Las Vegas, despite some well-documented recent economic troubles, is still a booming desert city of green lawns and opulent fountains.

That’s a lot of water. But, oddly enough, that’s only 10% of what is required to irrigate the cattle ranches of the Southwest. Those five million cattle on 250 million acres require irrigated pastures that consume half the Colorado’s average flow on a yearly basis. Ranching is, Davis writes, “a way of life rich in nostalgia but grotesquely inefficient in terms of consumption and ecological footprint…. Indeed the entire water crisis in the American West essentially comes down to cows eating alfalfa in a landscape where neither really belongs.” The region’s water rights are a politically-touchy issue. To quote Mark Twain: “Liquor is for drinking; water is for fighting over.”

One of Francisco Coronado’s lieutenants, Garcia Lopez de Cardenas, discovered the Colorado River in 1540 as he stared into the Grand Canyon. Hernando Alarcon had earlier probed the mouth of the river at the Gulf of California, when its now-depleted delta was the size of Rhode Island and teemed with flora and fauna: lush vegetation, jaguars, flocks of birds, and dolphins swimming in azure lagoons. Later the priest-explorer Father Silvestre Velez de Escalante touched on the river during his epic Southwestern wandering in the consequential year of 1776. Following our acquisition of the region after the Mexican War, early U.S. government reports described the great watershed as “altogether valueless…. the Colorado River, along the greater portion of its lonely and majestic way, shall be forever unvisited and undisturbed.” The river wasn’t navigated at all until John Wesley Powell’s harrowing 1869 descent of both the Green and the Colorado in dories. Its value as a water source — not just a river that flowed through a desolate landscape — wasn’t contemplated until the regional population and its agricultural needs began to grow.

In 1922, seven states (Wyoming, Utah, Colorado, New Mexico, Arizona, Nevada, California) approved the Colorado River Compact, a legislative agreement among those states and sanctioned by Congress, allocating the river’s water among the individual states that it drained and according to their needs. (The Compact was controversial. Arizona didn’t officially sign-on until 1944, for instance and California’s mighty thirst has always dominated, to the litigious chagrin of the other states.) The Compact also allowed the new federal Bureau of Reclamation to begin dam projects. The construction of those 25 dams started with Boulder (now Hoover) Dam in 1928 (completed 1935), and culminated with the controversial Glen Canyon Dam in 1963, which flooded that beautiful canyon and created Lake Powell. Glen Canyon compared so eloquently to the Grand Canyon in the writings of Wallace Stegner and Edward Abbey. “Today, Glen Canyon Dam remains an object of disdain,” writes Davis.

The writer takes a rafting trip on the river and uses that experience as a backdrop to preach his anti-development sermon: “For nearly a hundred years we have sacrificed the Colorado River on the altar of our prosperity. Surely it is time to shatter this way of thinking and recognize that the river’s well-being is our prosperity.” He complains that the Colorado is exploited as a water resource, but offers no solutions to the problem of demand. Does Davis really believe western ranching is just going to go away? And what about those 30 million thirsty residents of some of the fastest growing cities in America? River Notes great weakness is a failure to examine the other side of the argument, which encompasses a century of local history and its attendant human factors. The book is simply a pamphleteering environmental screed.

“We must let the river flow,” writes the author. Sorry, Mr. Davis, it’s not as simple as that.