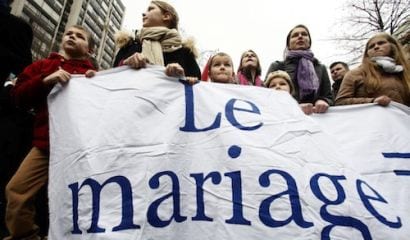 France and the U.S. are both undergoing social democratic onslaughts. That only intensified after last year’s elections. The difference, mes amis, is that French conservatives are putting up some surprisingly spunky resistance. The American middle class, by contrast, appears to be rolling over and going back to sleep, passively agreeing with the ineffable Chris Matthews, who exulted shortly after last November 6, “Legalized pot and gay marriage, is this a great country or what?”

Some time back a certain Mitt Romney cautioned that, “unless we take action, we’ll end up being the France of the 21st century.” The fashionable complaint became that we were looking more like France every day. Look again. On a number of big issues from soft drugs, to taxation, to same sex marriage, we’ve already become more liberal than France. The trend is clear: trillion-dollar budget deficits, a Social Security system going broke, government spending at some 40 percent of GDP — only a few points less than in the euro zone — one in seven Americans on food stamps, and ever more dependent on big government. Only visible difference is that liberal social democracy is developing willy-nilly in the U.S., whereas in France, for better or worse, it’s systemic. The Obama administration is working on that.

Take legalizing marijuana. Since last November citizens in Washington state and Colorado can merrily light up a joint, and federal law criminalizing it be damned. While the Justice Department tries to decide what action to take, “the Berlin Wall of pot prohibition seems to be crumbling before our eyes,” as Rolling Stone happily reports. With some 58 percent of Americans favoring legal marijuana and Barack (“We’ve got bigger fish to fry”) Obama signaling flexibility, the way is open to a chaotic nationwide patchwork of legal pot. If it’s not available in one state, a short trip next door will be all that’s needed to stock up. Several other liberal Left Coast states, plus some like Minnesota and Rhode Island, appear likely to follow suit soon, while the District of Columbia is opening its first medical marijuana dispensaries.

But leave your weed at home if you’re going to France. French law strictly prohibits the possession, use, sale and purchase of cannabis and other recreational drugs. It backs that up with a maximum fine of 75,000 euros ($97,500) or up to ten years in prison. Not only is pot unequivocally illegal in the eyes of the law, but some French companies are requiring that job candidates give urine samples to determine whether they use it. And there is little visible public sentiment to go squishy on that. Even Socialist President François Hollande, who never saw a liberal cause he didn’t espouse, made no campaign promises last year about legalizing cannabis. Try explaining to a Frenchman that the U.S. has a more conservative approach to drugs.

American and French judicial institutions also differ on how they have accepted, or not, the radical, emblematic liberal campaign pledges of Obama and Hollande. The former promised sweeping health care reform and produced the Affordable Care Act of dubious constitutionality. Did Congress have the right to force citizens to purchase a product — the individual mandate — or pay a penalty? The administration claimed it was allowable under the Commerce Clause. The Supremes had to admit that this was wrong, so under the leadership of a complaisant Chief Justice John Roberts, they found a way to make Obamacare legal. The requirement to buy health insurance was simply a new tax! Or maybe both a penalty and a tax. Whatever, the highest court in the land went along with an important expansion of the welfare state.

Compare that with the judicial fate of one of François Hollande’s highest-profile pledges. He vowed to soak the rich for all they were worth, notably with a battery of new tax legislation including the infamous, confiscatory 75 percent tax on income over $1.3 million. But when the new fiscal law — a symbol of French Socialism if ever there was one — was passed last December, French conservatives immediately challenged it before France’s Conseil Constitutionnel, charged with ensuring that new laws conform to the constitution. Alas and alack for Hollande, it quickly struck down the 75 percent tax, along with tougher rules on how wealth, stock options and capital gains were to be taxed. In an embarrassing political setback for Hollande, it declared the tax package violated tax burden equality before the law. While the Supreme Court approved a big, controversial new tax, France’s watchdog drew a line in the sand explicitly limiting how far socialist taxation could go. Who’s more liberal?

In both countries the concerted homosexual effort to undermine the family as the basis of society is gaining ground. But it is in the U.S. that same-sex marriage is advancing faster, as timid conservative opposition yields to the specious “equality” arguments of activists, the issue’s appeal to politicos as a vote-getter, and the homosexual lobby’s $35 million propaganda campaign. The 1996 Defense of Marriage Act (soon to be left to the tender mercies of the Roberts Supreme Court) did nothing to discourage voters in Maine, Maryland, and Washington state from becoming the first to approve same-sex marriage by popular vote in November, joining the six other states and the District of Columbia where lawmakers or court rulings already allowed it — some 14 percent of the U.S. population. That leaves only 30 states with constitutional amendments defining marriage as between a man and a woman; legislators in several of those will consider changing that this year.

The White House, of course, is all for it. So are boosters like the Illinois businessmen who came out in favor of homosexual marriage on the eminently moral grounds that it would be good for hotels and the wedding industry — even Sinclair Lewis in Babbitt wouldn’t have dared make that up. To the appreciative applause of gay rights groups, Newt Gingrich wetted his finger, checked the wind, and advised Republicans to get used to the inevitable. After all, if a majority seems to approve, it must be right! Don’t look for principled leadership from the precincts of Washington National Cathedral, either. Dean Gary Hall gaily announces he will join lesbian, bisexual, homosexual and transgenders in a gaudy travesty of holy matrimony beneath its neogothic spires. Those inside the Beltway might understand that the Cathedral, site of the consecration of an openly homosexual bishop, has long been a liberal maverick within the international Anglican communion. But in the Age of the Image, the world’s retina will record that one of America’s premier religious landmarks stands as a mockery of family values.

The battle to save the traditional family is probably lost in France, too, but French conservatives are at least determined to go down fighting. And the vigorous war they are waging against same-sex marriage and adoption is not over whether it is an inevitable, vote-getting trend, or a good money-maker for business, but over religion and values.

The political deck is stacked against them. François Hollande promised he would deliver his “marriage for all” law — overturning Napoleon’s code civil of 1804 defining marriage as a union between a man and a woman — during his first year as president. He has the Socialist Party votes in parliament to ram it through. It will be, he hopes, one of his key “progressive” social reforms, as well as a welcome diversion from the economic crisis that has sent his numbers plunging to a record low of 35 percent for a new president. Conservative opponents of the law want him to honor Candidate Hollande’s pledge to put important social issues to a referendum. His administration replies that the issue was implicitly settled when he won the election last May, end of discussion. Presidential Concubine and First Mistress Valéry Trierweiler proudly declared she would be a witness at France’s first homo-marriage as soon as the law was passed.

Traditionalist opposition has been much more intense than either Hollande or his girlfriend anticipated, starting with the retort by a conservative member of parliament that Mademoiselle Trierweiler had no official status and would do much better to shut up. Tens of thousands of protesters began taking to the streets of France’s major cities in November, waving banners saying “don’t touch civil marriage,” “all born of a union of a man and a woman,” and “Made in Maman et Papa.” They ridicule a law that would officially ban the words mère and père on birth certificates, changing official references to “parent un” and “parent deux.” Vociferous street demonstrations climaxed January 13 with a monster, miles-long Paris march of some half a million, tens of thousands having been bused in from the provinces. They may not win the good fight, but they are, literally, walking the walk.

Catholic bishops have taken up the cause, Paris Cardinal André Vingt-Trois thundering that same-sex marriage was “a sham that will smash one of the foundations of society.” The outspoken Lyon Cardinal Philippe Barbarin went further, warning that homosexual marriage would “herald a complete breakdown in society,” leading to polygamy, pedophilia, and incest. The Catholic Church has been joined in protest by French Protestant, Jewish, Muslim and Buddhist spiritual leaders. More import on the ground, thousands of conservative local mayors, representing a rural France rooted in the family values of traditional Christian society, have warned that they will refuse to officiate over same-sex marriages. That ball is still in Hollande’s court.

It helps to let off steam on talk radio and negotiate endlessly over entitlement spending. But, seen from this side of the Atlantic, American conservatives seem to shy from muscular, grass roots opposition to creeping, half-baked liberalism. As the U.S. begins another four years of Obama-style social democracy, they could do worse than taking a leaf from their French counterparts’ book.