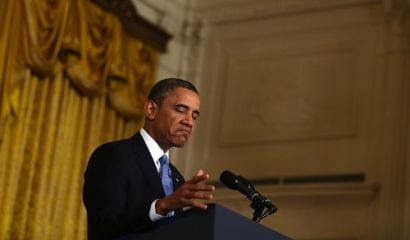 President Obama said at his increasingly notorious press conference on Monday, “America cannot afford another debate with this Congress about whether or not they should pay the bills they have already racked up.” He added, “[T]he issue here is whether or not America pays its bills. We are not a deadbeat nation.”

No that is not the issue. The issue is whether having already racked up a world record smashing $16 trillion in national debt, President Obama is going to be granted a license to rack up trillions more in national debt without enacting some control over runaway federal spending.

Raising the debt limit has nothing to do with paying the bills we have already racked up. That is just more obfuscation and calculated deception from President Obama. He thinks he can confuse the public about the real issue, on which he expects help from the Democrat party-controlled media.

But President Obama continued to spin confusion at the press conference:

That’s not showing any discipline. All that’s doing is not meeting your obligations. You can’t do that… Even the threat of default hurts our economy…. you never saw a situation in which Democrats suggested somehow that we would go ahead and default if we didn’t get 100% of our way. That’s just not how it’s supposed to work.

But the Republicans are not proposing to cut past spending. They are proposing to cut future spending, or actually just to reduce the increase in runaway, unprecedented, world record shattering spending that Obama and the Democrats are demanding.

Moreover, THERE IS NO ISSUE OF DEFAULT ON THE NATIONAL DEBT in the debt ceiling debate. Even with no increase in the debt limit at all, any debt that comes due can simply be rolled over and replaced with new debt. without violating the debt limit.

The Democrats Veer Into Chavismo
President Obama continued his calculated deception at the press conference, saying: “You don’t go out to dinner and then, you know. eat all you want and then leave without paying the check. And if you do, you’re breaking the law.”

But the only people talking about breaking the law are Obama’s Democrat allies in Congress, who are calling upon him to rule by decree, like a Latin American despot.

Senate Majority Leader Harry Reid sent the President a letter, urging Obama just to bypass Congress and raise the debt ceiling on his own by “executive action.” House Minority Leader Nancy Pelosi called on Obama to do the same.

NBC’s Chuck Todd noted in a long press conference question, “one of the House Democratic leaders, Jim Clyburn, asked you to use the 14th Amendment and even said sometimes that’s what it takes. He brought up the Emancipation Proclamation in saying that they took executive action when Congress wouldn’t act, and he compared the debt ceiling to that.”

The portion of the 14th Amendment to which Clyburn and other Democrats have referred says only, “The validity of the public debt of the United States, authorized by law, including debts incurred for payment of pensions and bounties for services in suppressing insurrection or rebellion, shall not be questioned.” That language gives the President no authority to ignore and even to violate the statutorily imposed debt limit.

But this is how Latin American dictators behave, stretching legal language beyond reason. All you white bread “progressives” out there, comfortable in your wealthy suburban enclaves, this is what your Democrat party has become, the equivalent of Hugo Chavez’s Socialist Party of Venezuela. And when they come after you, waving irrelevant legal language from somewhere, who is going to defend your property and lifetime savings?

The impeachment of Richard Nixon established that even the President is not above the law. The Constitution requires the President to “take care that the laws be

faithfully executed.… ” That includes the national debt limit statute. If President Obama breaks that law by executive decree, that too would be grounds for impeachment.

Threatening Social Security and Seniors
President Obama even descended to threatening America at his press conference,saying, “If Congressional Republicans refuse to pay America’s bills on time, SocialSecurity checks, and veterans benefits will be delayed.” He even threatened to refuse topay our troops.

So President Obama is legally obligated to continue to pay Social Security benefits in full with these funds, even without any increase in the debt limit at all. And

failing to do so would be in violation of the law, and so consequently another impeachable offense.

But President Obama continued with the same deceptive demagoguery in regard to Medicare. He said, “What I will not do is to have that negotiation with a gun to the head of the American people — that unless we get our way, unless you gut Medicare, or Medicaid … we are going to threaten to wreck the entire economy.”

Adult Supervision
It is so good that President Obama is refusing to negotiate with the Republicans over the debt ceiling. Obama has proven untrustworthy, deceptive, and manipulative.

And his Democrat party controlled media won’t even discuss the Republican side of the argument.

What the House majority Republicans have to do is what the American people elected them to do. Move legislation to solve problems. They should keep Obama on a short leash and pass a debt limit increase sufficient for a couple of months, consistent with the Boehner rule of $1 in spending cuts for every $1 of increase in the debt limit.

Moreover, they should use spending cuts as proposed by Obama’s own Simpson-Bowles Commission.

That would put the lie to Obama’s press conference claim that the Republican “alternative is for us to go ahead and cut commitments that we’ve made on things like Medicare or Social Security or Medicaid and for us to fundamentally change commitments that we made, to make sure that seniors don’t go into poverty, or that children who are disabled are properly cared for,” or that Republicans are dubious “about government commitments, for example, to make sure that seniors have decent health care as they get older [see, contra, Obamacare],” about Social Security benefits, “about whether government should make sure that kids in poverty are getting enough to eat or whether we should be spending money on medical research.”

But the Republicans do need to talk to the American people when they do this, using the media focus at the time to explain what they are doing. And when Harry Reid says “dead on arrival,” and Obama dismisses the Republican plan as not “sensible,” what the Republicans need to uniformly say loudly and excessively repetitively, “If you Democrats disagree with our plan, you pass what you want in the Senate, and we will see you in the House Senate Conference Committee to work out the final compromise. But we have done our work on the debt ceiling and now it is your tum. This is how the legislative process works in America. See, e.g., your high school civics textbook.”

And the Republicans must do the same on tax reform. They cannot look again like they are protecting tax loopholes for the rich. The House needs to pass Paul Ryan’s tax reform plan. That involves closing loopholes in return for reducing tax rates to 10% for families making less than $100,000 and 25% on incomes above that.

Then they should say to the public, “We have acted on tax reform. If the Democrats disagree with what we have done, they should pass what they want in the Senate. Then we will work out the final compromise in the House Senate Conference Committee. Not in a closed door, smoke filled room in the White House. That is how the legislative process works in America. See, e.g., your high school civics book.”

Forcing the Democrats into this legislative process pins them down and holds them accountable to the public for their positions. In that harsh light of day, they will drop the radical left pose for the real world results.

And on the sequester, the Republicans should simply let the cuts go into effect. They can come back in the appropriations process to adequately provide for the national defense, or force the Democrats to publicly oppose an adequate defense, in ultimately recorded votes.