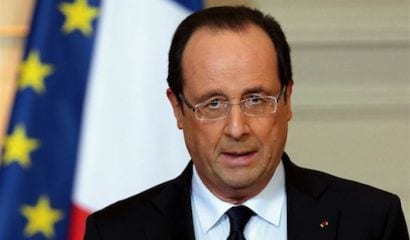 Behind his back they giggled and called him Flanby. He might have been popular with the French press, always good for a quick quip and a laugh, but for them as for most French, François Hollande was a lightweight, a Socialist Party apparatchik who had never held even a cabinet post. “Look at him,” sneered Ségolène Royal, his mistress of 30 years and mother of their four illegitimate children, after their separation in 2008. “He’s never done anything!”

Two years ago his most ambitious dream was to find a way to resolve his separation from her and live quietly with his new love, Valéry Trierweiller. In any case, the path to the French presidency was blocked by Dominique Strauss-Kahn, then head of the International Monetary Fund and leading all the polls to easily beat Nicolas Sarkozy in the 2012 presidential race. So he really didn’t mind the jokes about Flanby, a popular gelatinous dessert pudding.

Then in May 2011 Strauss-Kahn forced himself on a cleaning lady in a New York hotel and his French political prospects went down in flames. Hollande suddenly found himself the Socialist Party candidate against Sarkozy. Running as a self-effacing Monsieur Normal against the pushy, flamboyant Sarko, he eked out a victory and became, in effect, France’s Accidental President. But he was still hard to take seriously. French media delighted in Hollande bashing, picturing him as soft, compromising, and indecisive.

His poll numbers fell to a record low 35 percent for a new incumbent of the Elysée Palace as unemployment topped 10 percent and austerity programs started to bite. Even more painful for Hollande was that efforts to implement two of his emblematic, purely ideological campaign pledges met unexpected, embarrassing opposition. In response to his vow to impose a 75 percent income tax on revenues over $1.3 million, wealthy French businessmen and entertainers from Bernard Arnault, France’s richest man and chairman of the luxury group LVMH, to movie star Gérard Depardieu were leaving the country in droves. Worse, the supertax was struck down by the Conseil Constutionnel as violating tax burden equality. Then came the unexpectedly strong resistance by France’s usually silent majority, la France profonde, to his proposed law to permit homosexual marriage and adoption. In its hundreds of thousands it rose up and bellowed its refusal to see Christian family values vitiated.

It was just then that came the surprise—and surprising—decision to fly to the aid of poor, besieged Mali. (Interestingly, it was announced the very weekend of the huge Paris demonstration against homosexual marriage, neatly pre-empting most media attention.) Attacks by Islamic extremists in the north of the country had been going on for months, but suddenly Hollande found it extremely urgent. France had no choice but to defend Western Civilization.

The sudden lurch into war by an unpopular president was reminiscent of Nicolas Sarkozy’s decision in March 2011 to help Libyan rebels by bombing his former friend Muammar Gaddafi. His numbers in the 20s, he declared that “France has decided to play its part in history… It’s our duty.” It worked. As an admiring Sarkozy aide said, “He was on the ropes, and suddenly he has the whole world following his lead.” Diverting hostile public attention with a military escapade is the oldest trick in the books for faltering heads of state.

It might yet work for Hollande, and we can only hope it will work for Mali. But so far, few countries have felt sufficiently convinced of the threat to join France in any important way in this feat of arms.

Its European neighbors are all behind it. Way behind. Its great and good friend Germany, for example, sympathized with Mali’s predicament but quickly ruled out sending troop, though it did declare this week that it will repatriate all 374 tons of gold it had stored in Paris. The so-called European Union, which has long trumpeted the need for a defense dimension for its 27 members, promised to think hard about a military training mission in Mali. Oh, and it would also hold a meeting of its Foreign Affairs Council. Britain coughed up a military transport plane or two, tiny Belgium committed to two helicopters and two transports. Canada sent all of a C-17 transport with 35 personnel. NATO, always on the lookout for a new mission to justify its post-Cold War existence, said it had had no discussions about Mali and was not involved.

In other words, François Hollande launched this perilous, ill-defined operation without putting together an operational coalition, or even serious prior consultation with allies. As for support from the U.S., both the State and Defense departments confirmed that France had made a number of requests, including help with information sharing, airlift, and aerial refueling. But didn’t France, which has a large and active embassy in Washington, know that the U.S. has a policy of not aiding Mali because the present government seized power in a coup? As Peter Pham, director of the Africa Center at the Atlantic Council, told the Financial Times, “The U.S. does not want to tell an ally to stand down, but by starting an operation they might not be able to finish, the French risk exacerbating the crisis.”

That leaves France with military support from the puny Economic Community of West African States (ECOWAS). There is supposed to be an African force of some 3,300 soldiers on the way. When they finally report for duty, they will have to be trained to work with Malian and French forces. (A senior French security official told the Washington Post that the African troops were far from ready; many had not even been selected by their governments.)

I will leave analysis of the African side of the operation to others, notably my AmSpec colleague Roger Kaplan. But whatever the military results at this point, it is working for Hollande. Fully 75 percent of those polled approved it. As one of his cabinet cheerleaders, Foreign Minister Laurent Fabius, described the decisive moment on primetime TV, “I saw him sign the order for the attack. And I can tell you, his hand didn’t shake.” Observers are comparing the impact on his image with that of Barack Obama’s raid on Osama bin Laden. “Finally president!” applauded one Paris newspaper. “Finished the hesitant and nonchalant François Hollande of the first months of his term.” Summed up one commentator, “It changes his image instantly.”

That could change again if France fails to attain its ambitious stated goals of stopping the rebel advance, rooting them out of their vast desert stronghold, stabilizing Mali, and restoring its territorial integrity. The Defense Ministry says it will deploy a total of 2,500 troops, a small number compared with the estimated 10,000 to 12,000 rebels facing them. Already the rebels are closer to Bamako, the capital where some 6,000 French expatriates live, than they were before the French attack. Public enthusiasm for the operation will likely moderate when the inevitable French casualties begin to be reported.

Concern is also rising over reprisals within France itself. Security has been tightened at airports, train stations, department stores, and other public venues, with 64 percent of French worried that the danger of terrorist attacks has increased. An Islamic rebel leader, Oumar Ould Hamaha, said on a French radio station that France “has fallen into a trap much more dangerous than Iraq, Afghanistan or Somalia.” It had “opened the gates of hell for all the French.”

As with all puddings, the proof of this one will be in the tasting.