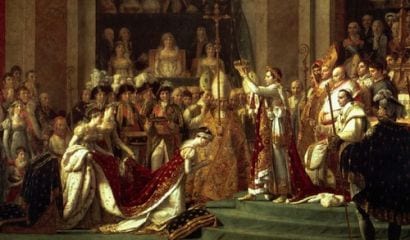 Above: A fragment of Jacques-Louis David’s oil painting of the Coronation of Emperor Napoléon I and Coronation of the Empress Josephine in the Notre-Dame de Paris, December 2, 1804

Description: Joséphine kneels before Napoléon during his coronation at Notre Dame.
Behind him sits Pope Pius VII.

You’re Napoléon Bonaparte, and you were destined to be both the crowner and the crowned. Someday people will understand that the Revolution was for idealists. For now, it takes a tough man to finish the job.

You have many reasons to be smug. In the eighteenth century, who would have thought that a short, solitary Jacobin from Corsica could rise to become Emperor? But avoid that temptation: amongst all human emotions, there’s a reason why there will never be a perfume named “Smug.”

You’re a natural. But, respectfully, here are some time-honored (both past and future) best practices for absolute rulers:

• Be audacious, but look humble — even though you memorably and solemnly put the crown on yourself — and David already has the historic moment in his sketches — we’re going to go in a different direction.

• Flaunt your biography — your foreign-island birth should evoke romance and mystery. Anyone who questions your French-ness is a counter-revolutionary who deserves what happens. Focus on the critical low-information peasants, and just keep repeating to them that you, NB, made France proud again.

• If you think alpha-male, you can be alpha-male. Don’t let your wife get off her knees. And don’t move off that step — the angle makes you look a foot taller.

• Yesterday’s gone: act accordingly. You astutely patched up your family squabbles, so now the whole clan is on the same program. Even though they were absent at the coronation, we’re putting them in the picture. Just because it never happened doesn’t mean it’s not true.

• Include religious leaders, but show them who’s boss — His Holiness blew in all the way from Rome, and it almost chokes me up to see how the artist has him giving you that little blessing with his hands. He still thinks he’s Pope – but you made him an atmosphere extra. Well-played.

• Turn your opponents into enemies: Make it visceral. Nobody hikes through snowy Alps for just an idea.

• The one-percent can be useful, as long as they’re your one percent. You’ve ended this revolutionary fetish against the establishment. Well done. Selfish, preening, and out of touch, their loyalty can be acquired for a pittance. As a bonus, they’re your last best source for excellent cuisine.

• The law codes are your friends – as long as you’re the one writing them. Centralize the power, but make it user-friendly – and that genius who thought up the ten-day week… keep him out of the room.

Finally: Never believe your own murals. A lifetime of brand-building can be wiped away by one nasty winter.