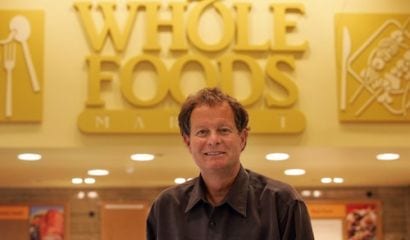 As a general rule, I avoid “healthy” food whenever possible. I try to eat things with extra fat and lots of additives. This is a conscious strategy that should assure that I keel over before being left to the tender mercies of Medicare after the Obama administration has transformed it into a system that rations care based on a Byzantine formula that purports to measure how many “quality” years of life a patient has left. Moreover, if I consume enough chemical additives, I can save my family some money by arriving at the funeral home pre-embalmed.

For a brief period this week, however, I was on the verge of bestowing my custom on Whole Foods Market, despite its deplorable policy of “selling the highest quality natural and organic products available.” Why? Because it seemed that the grocery chain’s CEO, John Mackey, was that elusive creature for whom Diogenes searched so fruitlessly — an honest man. Mackey is currently promoting his new book, Conscious Capitalism, and has therefore subjected himself to a series of media interviews, including one recently broadcast on NPR.

During that interview, he was asked if his opinion of Obamacare had changed since he wrote, in the Wall Street Journal, “All countries with socialized medicine ration health care by forcing their citizens to wait in lines to receive scarce treatments.” He answered as follows: “Technically speaking, it’s more like fascism. Socialism is where the government owns the means of production. In fascism, the government doesn’t own the means of production, but they do control it — and that’s what’s happening with our health care programs and these reforms.”

One can imagine the gasps with which that “clarification” was received by the people on the set of Morning Edition. And it must have caused the Obamazombies among his Whole Foods customer base to react as if they had discovered lamb chops lurking among the bean sprouts and bottles of carrot juice. As the good folks at NPR gleefully noted in an update, “Many of you wrote in to tell us you were taken aback by Whole Foods top executive John Mackey characterizing the health law as fascism in an NPR interview, and apparently, he’s feeling a little sheepish.”

This was their way of gloating about the belligerence with which he was questioned about his heresy by Norah O’Donnell on CBS This Morning. His response to her interrogation was disappointingly craven: “Well, I think that was a bad choice of words on my part … What I know is that we no longer have free enterprise capitalism in health care, it’s not a system any longer where people are able to innovate, it’s not based on voluntary exchange. The government is directing it. So we need a new word for it. I don’t know what the right word is.”

OK, Mr. Mackey, if it’s not socialism and it’s not fascism and it’s not capitalism, what precisely is it? The humbled Whole Foods magnate made another attempt to arrive at acceptable nomenclature on Thursday while prostrating himself before the thought police at HuffPost Live: “I regret using that word now because it’s got so much baggage attached to it.… Of course, I was just using the standard dictionary definition.… I think I’m going to use the phrase government-controlled health care. That’s where we’re evolving to right now.”

There is, of course, a reason the word “fascist” has “baggage attached to it.” As Mackey gratuitously (or perhaps not) explained to O’Donnell, “That word has an association with dictatorships in the 20th Century, like Germany and Spain and Italy.” He might have added that an important feature of these regimes was “government-controlled health care,” as he has now decided to call it. Another distinctive feature that they shared was a conspicuous dearth of free expression, particularly where unpopular government programs were concerned.

Mackey is, of course, not alone in using the “F” word in relation to Obamacare. In fact, as Jeffrey Lord noted yesterday, constitutional expert Mark Levin used it in a discussion about a new executive order that will “clarify the Affordable Care Act” to encourage doctors to ask patients if they own guns: “There are some things in his executive orders that are un-American. In some ways they’re even fascistic. Doctors are private citizens. Do we really want doctors reporting to the federal government.… How is that going to stop any crime?”

Levin normally uses the term “tyranny” when he discusses the policies of our recently re-elected President. And perhaps that is the best term. Obamacare goes far beyond what Mackey calls “involuntary exchanges directed by the government.” It is part of a larger and far more insidious project that seeks to stamp out free expression as well as free enterprise. It is a project that permits the HHS secretary to issue illegal gag orders to private companies and encourages Americans to browbeat their fellow citizens into recanting when they hold verboten opinions.

Interesting how that word, “verboten,” spontaneously springs to mind when thinking about this episode. And, oddly enough, the most virulent of those 20th century fascist dictatorships to which Mackey referred while groveling to the media bullies was led by a vegetarian. I think I’ll stay away from Whole Foods after all.