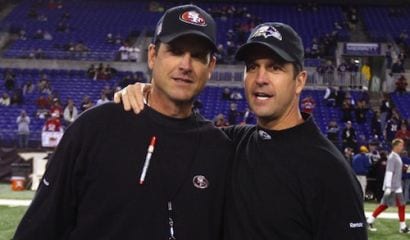 The two most balanced football teams in the NFL are headed to the Super Bowl. Both have impressive young quarterbacks. Both have stout defenses. Both returned to the conference championship after disappointing, and almost fluky, losses last year. And they are both coached by men named Harbaugh.

Baltimore Ravens head coach John Harbaugh leads a team that has been one of the top performers in AFC for the past decade. They’ve finally gotten over the AFC Conference title game hump for the first time during his tenure. His brother Jim Harbaugh has turned around a once-underperforming San Francisco 49ers unit with astonishing quickness.

Both men took calculated risks with their quarterbacks that have paid off nicely. The Ravens’ Joe Flacco has been inconsistent since his impressive rookie campaign in 2008. Flacco’s admirers believed he was shackled by overly conservative play-calling. What has happened since Baltimore has let Flacco cut it loose and throw deep down the field suggests that perhaps they were right.

Jim Harbaugh made a quarterback change during the season. The incumbent Alex Smith had been playing nicely, winning games and posting the highest pass completion percentage in the entire league. But after Smith was sidelined with an injury, the 49ers stuck with Colin Kaepernick, a second-year player who was more mobile and had a solid deep ball.

Kaepernick is known for his running. In his first playoff start against the Green Bay Packers, he rushed for 181 yards, breaking the single-game record for most rushing yards by a quarterback that had been held for over a decade by Michael Vick. But in the championship game against the Atlanta Falcons, he proved he could air it out quite nicely too. While his stat line doesn’t leap off the page—16 completions out of 22 attempts for 233 yards and a touchdown—he made the throws when he needed to.

The Ravens’ impressive win over the New England Patriots was billed as an upset (and to us New Englanders it was indeed upsetting), but the truth is that Tom Brady has always struggled against their defense. Baltimore is one of the few teams that are not afraid to go into Foxboro. While Brady wasn’t under duress much on Sunday night, the timing was off on some critical pass plays and the wind wasn’t the only reason.

The Patriots missed Rob Gronkowki as a red zone threat. Containing the Ravens’ offense became an even greater challenge once cornerback Aqib Talib left the game with an injury. Finally, safety Bernard Pollard—the man who had previously inflicted season-ending injuries on Brady, Gronkowski, and wide receiver Wes Welker—knocked running back Stevan Ridley out of the game, leading to a fumble that was the first of three costly turnovers.

The Atlanta Falcons have been trying to win a playoff game since star quarterback Matt Ryan was drafted in 2008. They finally passed that test with a win over the Seattle Seahawks. With a strong group of wide receivers, Ryan played well on Sunday, completing 30 passes out of 42 attempts for 396 yards, three touchdowns, and one interception. But the incompletion on fourth down at the end of the game is the one that mattered most. The Falcons lost by four points.

Baltimore’s Super Bowl run has also been an extended farewell tour for colorful linebacker Ray Lewis, who is retiring after 17 seasons. While the end of Lewis’ career is likely to dominate the coverage, one has to wonder how much longer 49ers wide receiver Randy Moss will continue playing. He is now 35 and more of a possession receiver, though he still has the speed to occasionally burn defenses deep.

Falcons tight end Tony Gonzalez is expected to call it quits after an impressive 16 seasons in the NFL. Although he hasn’t been as outspoken about his plans, Patriots wide receiver Deion Branch—a former Super Bowl MVP—may have also played his last game.

The Falcons will still have a lot of talent on their roster next year, with both Julio Jones and Roddy White at wide receiver. There may be some questions about running back Michael Turner, who injured his ankle and at 30 is on the older side for his position.

But the Patriots have more questions. While in many ways an upgrade from the team that lost the Super Bowl last year, the Patriots’ pass rush was still missing when it mattered most. This may have been due to defensive end Chandler Jones, who was injured in the divisional round, playing just two snaps.

While Brandon Lloyd was a productive wide receiver for the Patriots, he was not the Randy Moss-like deep threat fans were hoping for. Welker played the entire season on the franchise tag after the team was unable to come up with a long-term deal. There is no guarantee he will be back. And the biggest question is how long the Brady window will remain open—he is still playing at a high level, but will that continue long enough for another Super Bowl victory?

All those questions can wait, however. For now, it is on to the Harbaugh Bowl.