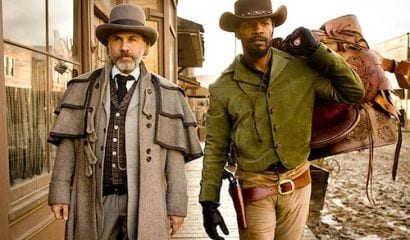 Beginning with the opening screen card, which informs us that people in Texas in 1858 were living “Two Years Before the Civil War,” the historical errors and anachronisms in Quentin Tarantino’s Django Unchained come thick and fast. As in Inglourious Basterds (2009) there is even an orthographical mistake inserted into the title to indicate the author’s contempt for conventional ideas of, well, convention, at least as it relates to linguistic or historical accuracy. In the film we are told that the “D” in the name of the film’s ex-slave superhero, Django (Jamie Foxx), is silent. But the spelling of the name, presumably taken proleptically from the great French jazz guitarist Django Reinhardt (1910-1953) of the Quintette du Hot Club de France by way of Sergio Corbucci’s spaghetti western Django (1966), was invented in the first place in order to signal to French speakers that the name was to be pronounced not in the usual French way but comme en anglais, avec un “D” avant (like Jim of Jules et Jim). In other words, the D is not silent but otiose.

So, too, we have ante-bellum Klansmen and Jim Crow laws out of their time, an account of Wagner’s Siegfried eighteen years before its premiere, and a lurid amalgam of “Mandingo fighting,” Wild West-style six-gun shootouts and “Wanted, Dead or Alive” bounty-hunting all taken straight from the movies. Furthermore, we must listen to an elaborate theory of “scientific” racism based on an idiosyncratic version of phrenology from a slave-owner named Calvin Candie (Leonardo DiCaprio) — the sort of thing that really belongs to the 20th century eugenics movement which did so much to launch the “progressive” era in America. In slave days, nobody felt the need to demonstrate the inferiority of the Negro. The world in which Django teams up with a German dentist named King Schultz (Christoph Waltz) to hunt down and murder dead-or-alive fugitives for the bounty on their heads and, then, to rescue the former’s wife, named Broomhilda (Kerry Washington), from bondage, is clearly as fantastical as “Candyland,” which not coincidentally is the name of Mr. Candie’s Mississippi plantation.

Mr. Tarantino’s contempt for history extends even to his defense, in the wake of the Newtown shootings, of the usual gore-fest that this movie, in common with its predecessors, quickly becomes. He modestly compared himself to Shakespeare whose plays, he supposes, were like his own movies in containing lots of “violence” and who was, like himself, thus blamed for inciting “violence in the streets.” This is no more historically accurate than anything else about the movie, but for some reason critics and commentators have not thought it worth their while to mention the fact. I suppose this is because Django Unchained is so obviously cartoonish throughout that no one ever expected of it so much as an approximation of historical accuracy. As with Pulp Fiction, the author advertises up front that he is speaking to us with no serious purpose but merely as a connoisseur and pasticheur of pop-cultural trash which he has found amusing.

Here, he imitates the spaghetti westerns of the 1960s and 1970s, as will be clear from the opening frames, but he grafts onto his ever more fantastical tale of frontier honor, as he did onto the World War II story in Inglorious Bastards, what is obviously intended as a sort of politico-social commentary. Slavery, it seems, like Nazism, was a very bad thing — who knew? — and therefore anyone in any way associated with it must have been almost unimaginably evil. Certainly Mr. Tarantino is unable to imagine it except in the most luridly unrealistic fashion. As a result, we have absolute license to delight in anything that is done to such people — first, because they have made the fatal decision to get involved in slavery (or Nazism, in the earlier film) and, second, because they are so unlike real people that they have already been robbed of their humanity in any case. Like the victims of Dr. Schultz’s dead-or-alive bounty-hunting, they must be regarded as beyond the pale of civilized movie-making and therefore fair game for Mr. Tarantino’s sick fantasies of violent death.

Those, too, would doubtless have passed unnoticed — just Quentin being Quentin — but for the Newtown massacre, which actually caused the movie’s premiere to be delayed. Could there have been a twinge of conscience there, or only advice from a PR guy? But there was more criticism of the auteur for his script’s casual use of a well-known racial slur — where, of course, it suited him to plead that this, at least, was historically accurate — than there was for his graphic portrayal of hecatombs of human slaughter, the victims being slave-owners and their lackeys. Spike Lee, for one, criticized his frequent use of “the n-word” as a form of “disrespect” to his own ancestors, though if they were my ancestors I would have found much worse disrespect in seeing them presented as one-dimensional figures in an unashamedly anachronistic cartoon that made light of their sufferings by making them, like their deliverance from them, merely fantastical.

Why has there been no critical complaint about Mr. Tarantino’s disguising the real evils of slavery under a thick impasto of exaggeration? For the same reason, I guess, that there has been so little, and that little mostly muted, of his obvious delight in a counterfeit presentation of what bullets and high explosives can do to the human body. However distorted the pulp fiction and B-movies on which Mr. Tarantino relies for his model, they nearly always retained some tether to reality — on which, therefore, they could shed some light, however dim. Django Unchained, like Inglorious Bastards and Kill Bill before it, has none. Distortion and therefore falsity is of its very essence. And that should also tell us something, too, about the nature of the thrill some if not all the Taranteenies are getting from the supposedly “true to life” blood and guts that here and there, even in the media, people have lately complained of. When that’s the only truth you care about, it’s a pretty sure bet that that isn’t true either.