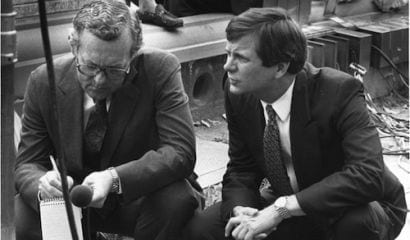 The depressing spectacle of Barack Obama inaugurating a second term should not obscure this truth: Conservatives win on issues. They lose in elections because they don’t know how to frame the choices, even on those many issues on which the majority of the public is in their corner.

Consider the most recent poll numbers. Gallup on abortion: “Would you consider yourself to be pro-choice or pro-life?” Answer: 50 to 41, pro-life.

Gallup on whether government “is trying to do too many things that should be left to individuals and businesses” or instead “should do more to solve our country’s problems.” Answer: By 54-39, “is trying to do too many things.” And 51 percent think the federal government “has too much power” versus 40 percent “has about the right amount of power” — and only 8 percent thinks it “has too little power.”

Impression of the National Rifle Association? Fox News, just last week: 56 percent favorable, 33 percent unfavorable. Will tough guns laws help stop incidents like the Newtown school shooting? Only 22 percent say yes, while 71 percent say “the people who commit these kinds of acts will always find the guns to commit violent acts.” And: “Which is more important: protecting the constitutional rights of citizens to own guns, or protecting citizens from gun violence?” Rights defeat protection, 51-40. And CNN, also last week, asked: Would “having stricter gun control laws… reduce the amount of violence in the country, or not?” Not: 61-39.

And by 47 percent to 40 percent, those polled support having “armed guards in every school” ahead of “stricter gun control laws.”

Okay, how about the debt ceiling? CBS last week gave three options: “Raised without conditions” or “raised with spending cuts” or “not raised at all.” The answers: 17 to 60 to 18. Put the latter two together, and a whopping 78 percent want the limit either to remain unchanged or to be raised only with spending cuts attached. And, to repeat: Only 17 percent support Barack Obama’s position of raising the limit without preconditions.

For traditionalists out there, the news isn’t even hideous on homosexual marriage. Forty percent of Americans — only a plurality — support “marriage equality.” The middle ground, if traditionalists want to seize it, is to support “civil unions,” which garners 30 percent support — and which, if combined with the 24 percent who want no “legal unions” of any kind, means a majority still would stop short of having the law fully ratify homosexual marriages.

We can play these polling games for hours. Or for years. They won’t help conservatives unless conservatives learn how to re-connect the public impression of their positions with the positions conservatives actually take, and with the reasoning behind them. Conservatives tend to be at once too vague and too unwilling to use broad labels. Yes, they do both at the same time. For fear of having the establishment media blast them for “name calling,” conservatives almost never label their opponents as “liberals,” “hard leftists,” “welfare expanders,” or any other of the monikers of the sort that the late Lee Atwater, for example, was so fond of using. Atwater had many flaws, but it was a political virtue that he did not shy away from honest labels that served raw political ends.

The key, though, was that Atwater didn’t just stop with the labeling. He worked assiduously to give content to the labels. He chose real issues that were legitimate in and of themselves, and that also served as effective symbols for larger, broader arguments.

One need not run a photo of Willie Horton — Atwater never did so, by the way — to complain about how a furlough program and revolving-door prisons lead to more violent crime. Or, to leave Atwater behind, Ronald Reagan was a master not just at making crystal clear what his broader philosophical points were — as in: We must build our defenses in order to secure world peace — but at using specifics to bolster his broader themes.

Consider his famous campaign debate against Jimmy Carter. Establishment media accounts in retrospect make it sound as if Jimmy Carter knew all the facts, but that Reagan won the debate merely by virtue of a few famous, well-delivered one-liners. Bah, humbug. Reagan spent an entire debate giving meat to the themes he encapsulated in his famous riffs, such as the one about American not being “better off” than it had been four years earlier. Consider this litany on defense: “Now, Gerald Ford left a five-year projected plan for a military build-up to restore our defenses, and President Carter’s administration reduced that by 38%, cut 60 ships out of the Navy building program that had been proposed, and stopped the B-l, delayed the cruise missile, stopped the production line for the Minuteman missile, stopped the Trident or delayed the Trident submarine….”

Today, unfortunately, conservatives seem to have lost the knack to talk specifics without lapsing into incomprehensible legis-speak. They talk of “sequesters” and “premium support” and “out years” and “chained CPI.” Or, perhaps worse, they just repeat the vague mantra that America needs to “cut” spending and balance its budget. They are either too lost in the weeds or too up in the clouds.

They should talk of “automatic spending reductions,” “personal Medicare accounts” (or “Medi-Choice”), and “a few technical changes in inflation formulas so that high-income people don’t get too many benefits.”

And they should talk not of “cuts,” which sound scary, but of “slowing down” spending increases by “taking our feet off the accelerator.”

And so on. Sometimes more words are needed to make meanings plain. Sometimes a huge reduction in words is needed. What’s important is not the number of words, but their qualities of clarity, understandability, and apparent relevance.

It remains a travesty that conservatives in elections so frequently under-perform the conservative polling advantages on hosts of issues. The losses result not just from poor communicating, but from a series of factors that includes poor strategy, poor tactics, weak legislating, insufficient technological prowess, and insufficient attention to face-to-face, neighbor-to-neighbor campaigning. But poor communicating heads the list, and it ought to be the easiest to fix.

Conservatives remain a majority (or a very large plurality) — and while we certainly aren’t silent, we all too often have been pathetically tongue-tied. The cause of limited government requires that we find, and use, a new political Rosetta Stone.