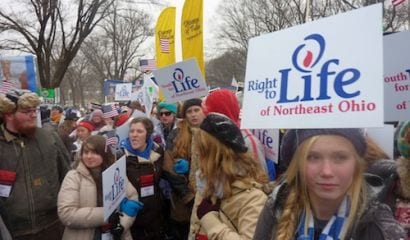 I never got his name, but the man in the black balaclava was a merry companion as the two of us walked several blocks of Constitution Avenue chatting and chanting last Friday afternoon. We had come separately to the March for Life; him from New York and me from North Carolina, both drawn to the District of Columbia together with something like half a million other people. We fell in with each other by accident, separated from our respective groups but content to be part of the tide of humanity swirling past the Capitol dome and up to the steps of the Supreme Court.

Police officers along the route looked miserably cold, yet sleet and snow dampened no spirits among marchers there. Forty years of legally permissible abortion is motivation enough to field an army, even if a Machiavellian president and taxpayer-funded merchants of euphemism prefer to think differently.

People on the March for Life sang hymns, including “God Bless America,” “Immaculate Mary,” “Mighty to Save,” and, improbably from college students near the Russell Senate Office Building, “John Brown’s Body Lies A-Moulderin’ in the Grave.” At least one marcher carried the Gadsden (Don’t Tread on Me) Flag. Other marchers alternated between praying aloud and leading people around them in catchy chants like “Hey, hey! Ho ho! Roe v. Wade has got to go!”

A contingent from Ohio shouted “We love babies, yes we do! We love babies, How ’bout you?” Delegations from Wisconsin, Kansas, Louisiana, and Pennsylvania were just as enthusiastic, holding signs that said “We are the pro-life generation,” and modulating their high spirits only long enough to extend heartfelt thanks to a group of women who held signs saying “I regret my abortion.”

I heard the man in the black balaclava before I met him. “I love this crowd!” he boomed, shortening his stride so as not to run into the people in front of us. He looked at the throng and smiled so broadly that snow found no purchase on his mustache. “It’s great to be pro-life, isn’t it? I’d hate to be on the other side of this issue. I mean, how can you support abortion unless you go out of your way not to think about it?”

I couldn’t tell from his tone if the question was rhetorical, but I agreed with him. We appraised each other in an instant. He was big, and apart from the “40 years too many” sticker on his chest, his outfit and close-fitting cap looked almost medieval. He would have been the man who pointed you to the armory if you asked for directions in an unfamiliar castle.

We were North and South, bearded and clean-shaven, monochrome and motley, veteran marcher and wide-eyed rookie, one of us expansive and the other reserved, but kindred spirits anyhow, and we knew it. Intrigued by his comment about the power of denial, I said, “Some of the people on the other side say they’re into science and we’re not.” The man laughed. “They say ‘science,’ but if you show them an ultrasound, they run away!”

We talked about where we’d come from, and how most of the media would probably mislabel the march by calling it “Anti-Abortion” rather than “Pro-Life,” or pretend that it had not happened. Denial has seldom been discussed so cheerfully. Yet I remember our conversation as much because of its context in the Roman liturgical calendar as because of my buddy in the balaclava.

At Mass in the national basilica that morning, the Catholic bishops of Raleigh and Charlotte had reminded everyone present that it was the “Feast of the Conversion of Saint Paul, Apostle.” This unusual confluence of piety and policy was made necessary by the fact that the presidential inauguration was the day before the anniversary of Roe v. Wade, and the irony of moving the March for Life to January 25 escaped neither bishop. In his sermon, Bishop Peter Jugis suggested that Paul was zealous all his life, but only added love and humility to his enthusiasm after encountering the risen Jesus on the road to Damascus. With that apostolic alloy in his character, Paul went from denying Jesus to proclaiming him all over the then-known world.

Diversity of belief in the pro-life movement is such that somewhere in the multitude that thronged Washington that day or the people elsewhere praying in solidarity with us, the bishop would get an argument, but that’s okay. Not everyone could join students from New Orleans in their flash-mob choreography for the song “Everybody Dance Now,” either.