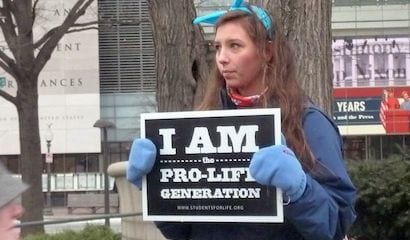 Forty years ago last week the Supreme Court declared that it found a hitherto unknown right in the Constitution, the right to have an abortion, no questions asked. That is, no one save the pregnant woman could say nay.

Every anniversary since then, the “Pro-Life” forces have carried out a March for Life on the National Mall, culminating in front of the Supreme Court building. For years their numbers have been growing. Although the National Park Service no longer estimates the size of rallies on the Mall, Doug McKelway of Fox News, who has covered a number of the events, said Friday that it looked to him to be the largest crowd ever, probably several hundred thousand.

At the edges of the Pro-Life crowd was a small band of pro-abortion folks. They always call themselves “Pro Choice,” although they seem unaware of the irony in that term. The fact is that any woman who decides to engage in unprotected sex has made a choice with potentially unintended consequences, an unwanted pregnancy.

The pro-abortion folks think there should be no responsibility to be attached to that other than opting for an abortion, preferably paid for by the taxpayers. (This approach was extended to the notion of taxpayer-paid contraception touted by college student Sandra Fluke at last summer’s Democratic National Convention. It was no fluke that Obamacare has provisions requiring all employers to include free contraception in their health care policies.)

The huge and impassioned throng at the March for Life heard equally passionate speeches from such as Sen. Rand Paul of Kentucky and Rep. Chris Smith of New Jersey. The event was covered by wire services and most newspapers although the “mainstream” television networks largely ignored it, as they usually do.

Does the March for Life move the needle of public opinion on the subject of abortion? A new poll by the Pew Research Center shows that 63 percent of adults oppose overturning the Roe v. Wade decision, up from 60 percent 20 years ago.

That, however, does not mean the public wholeheartedly supports unrestricted abortion. Far from it. A Gallup poll shows that 52 percent of the people want it to be legal under certain circumstances, while 25 percent want no restrictions and 20 percent want it outlawed. In the mid-nineties then-President Bill Clinton said abortion should be “safe, legal and rare.” This was a popular declaration although it turned out to be lip service when it came the “rare” part.

Where the Pro-Life movement is making headway is at the state level. Some 16 states have passed or are considering restrictions, such as parental notice by girls under 18; and prohibiting partial-birth abortion. (Partial-birth because the baby is out of the womb, full formed, but the physician has not patted it on the back to make it cry and the placenta has not been cut. A very small number of physicians agree to kill these babies — which abortion devotees call “Late-term abortion.” These doctors do it by abandoning the Hippocratic oath and plunging an instrument into the baby’s spine.)

In addition to making headway at the state level the Pro-Life movement has found a large influx of new and young marchers. Jeanne Monahan, president of the March for Life Education & Defense Fund, estimated that 80 percent of the marchers last Friday were under the age of 20. Benedictine College of Atchison, Kansas, for example, sent seven buses filled with 400 people from its home town on a 30-hour ride to Washington. A spokesman said this was easily the largest delegation the college had sent in the 28 years it has participated in the March for Life.

As the saying goes, progress often comes in inches, not great leaps.