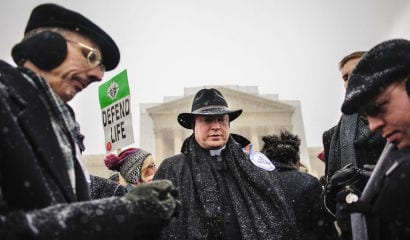 Last week about 100,000 or more marched in the annual March for Life in Washington, D.C. This year they commemorated 40 years since the 1973 Supreme Court decision constitutionalizing abortion on demand.

Supporting the march and the pro-life cause were leaders of America’s two largest religious communions, the 68 million-member Roman Catholic Church and the 16 million-member Southern Baptist Convention. Meanwhile, agencies for the third largest, the United Methodist Church, crafted a news release virtually celebrating Roe v. Wade. But 40 years ago, both Southern Baptists and United Methodists, at least officially, backed abortion rights.

A recent analysis from Baptist Press, the official news service for the Southern Baptist Convention, recalled that their 1971 convention had backed laws permitting abortion in cases such as “rape, incest, clear evidence of severe fetal deformity, and carefully ascertained evidence of the likelihood of damage to the emotional, mental, and physical health of the mother.” So the Southern Baptists essentially endorsed abortion on demand. A Baptist Press report two years later after Roe enthused that the court decision had “advanced the cause of religious liberty, human equality and justice.”

The head of the Southern Baptist public policy agency in the 1970s, then called the Christian Life Commission, backed government-funded abortions and supported, along with United Methodists and other Protestant denominational agencies, the Religious Coalition for Abortion Rights. By the late 1970s, conservative Southern Baptists, alarmed that their church was following the liberal path of Mainline Protestants, began to organize their eventually successful ascendancy over the convention. In 1980, the Southern Baptist Convention backed a constitutional amendment banning abortion except to save the mother’s life. In 1988, conservative Richard Land became the new head of the Christian Life Commission, replacing a pro-abortion rights liberal. At the 30th anniversary of Roe v. Wade in 2003, the Southern Baptist Convention repentantly declared: “[W]e lament and renounce statements and actions by previous Conventions and previous denominational leadership that offered support to the abortion culture.”

“I feel good that Southern Baptists are the most pro-life denomination of any size in the country,” Land recently told Baptist Press. “But I don’t feel good in the sense that I think we should always be doing more to help people understand the pro-life issue and how it relates not only to abortion but to euthanasia and end-of-life issues, which, of course, are going to become a more and more compelling issue in the immediate decades ahead.” Land is retiring this year as head of his church’s public policy agency after 25 years.

United Methodism first officially addressed abortion at its 1970 General Conference, when it backed abortion rights after a 20-minute debate among delegates. “The equality of our lives is increasingly threatened as the exploding population growth places staggering burdens upon societies unable to solve even their present growth problems,” it declared when urging state legislatures to permit abortion “upon request.” An earlier draft, proposed by the church’s Board of Social Concerns, but not approved, had even asserted that the “fetus is not a person, but rather tissue, with the potentiality in most cases for becoming a person, also recognizing that personhood is not possible without physical form.”

Fiercely opposing the abortion rights stance at the 1970 General Conference was the church’s then most distinguished theologian, Albert Outler of Southern Methodist University in Dallas, who later warned: “How long can we meaningfully say that all men are created equal while the innocent unborn are sacrificed to personal whim, convenience, or that new test of Americanism in our increasingly technological and impersonal age: The qualification of being perfect, or being wanted, or being viable?”

The 1972 United Methodist General Conference acknowledged the “sanctity of unborn human life,” while claiming that “in continuity with past Christian teaching, we recognize tragic conflicts of life with life that may justify abortion.” In 1973, after Roe v. Wade, the United Methodist Board of Church and Society and United Methodist Women’s Division helped to found the Religious Coalition for Abortion Rights, which remained headquartered in the United Methodist Building on Capitol Hill for 20 years. After a close vote at the 1992 General Conference that nearly withdrew the church from the abortion coalition, it relocated to new space. It also eventually changed its name to the Religious Coalition for Reproductive Choice. Episcopal, Presbyterian Church (USA), and United Church of Christ agencies still belong to it. Mostly using the churches’ names as a façade, it gets little if any church funding, instead relying on secular liberal philanthropies.

Last year’s United Methodist General Conference was prepared to accept a committee recommendation to withdraw from the abortion coalition until a legislative logjam and liberal maneuvers prevented a floor vote. In 2000, the United Methodist Church did oppose partial-birth abortion and has over the years backed other limits on abortion. But the church agencies belonging to the abortion coalition remain uncompromisingly pro-abortion rights. For Roe v. Wade’s 40th anniversary, they expressed no sadness over the more than 50 million abortions since 1973.

Instead, officials for the United Methodist Board of Church and Society and United Methodist Women’s Division jointly declared: “In the wilderness of political posturing and divisive blaming and shaming, we seek to be a voice crying out to prepare the way for the Lord to bring about a new era of reproductive justice for our families and communities. We actively await the realization of God’s Kingdom on earth, a kingdom in which all pregnancies are intended, sexuality is safe and celebrated, and families are healthy and secure.”

In contrast to likening abortion rights to the Kingdom of God, Southern Baptist spokesman Richard Land surmised: “I won’t feel ‘good’ — in the sense of good with quotation marks around it — until every Southern Baptist is pro-life and honors the Baptist Faith and Message commitment to defend ‘the sanctity of all human life from conception to natural death.'”

As Africans and U.S. evangelicals gain a majority within the United Methodist Church, the abortion rights stance almost certainly will fall. And someday soon, United Methodists may formally repent of their past, long-time official support for unrestricted abortion on demand.