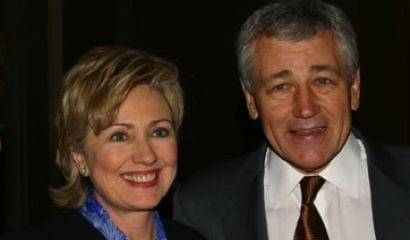 Richard Nixon, not known for his sense of humor, used to joke that he was an “expert” on Vietnam because he had visited it nineteen times. He would then admit most of these sojourns were refueling stops on the way to somewhere else. Staff would laugh and agree the boss was truly expert on the region. Hillary Clinton has developed the same sort of foreign policy credentials, but without the humor.

Yes, it’s true that she has been to many conferences and had many meetings with foreign dignitaries, but as far as actually having worked or studied in distant areas of the world, her experience is non-existent. Her husband learned all about the U.K. during his year at Oxford — through a cloud of pot smoke and pints of beer. Somewhere along the line this made him supposedly well versed in Anglo-Saxon culture — at least enough to satisfy Tony Blair.

The point of all this is to note that many — most — of the people in Congress and at the White House have little or no real field experience in foreign affairs. Spending one’s career at a desk in the DC area, whether it’s Langley, or Foggy Bottom, or any of the other appropriate sites, does not qualify as field experience. A tour in a comfortable European capital does not qualify as field experience. What does qualify is fifteen or twenty years at various posts around the world even if it’s regionally specialized. Chris Stevens had this type of background.

At one point during the Carter days, Stansfield Turner, the newly appointed Director of the CIA, stated that he preferred to fire all operations personnel over 55 years of age because they learned everything they knew from their experiences during WWII and the Cold War through 1976. This he held was out-of-date knowledge and experience. They should all go, he said, and so they did. When the special assistant in charge of this house cleaning was finished, he, too, was retired. In spite of later efforts to rebuild, the Agency never completely recovered its institutional memory or agent relationships.

The reality is that the institutional memory and international contacts, as well as definitive intellect, of both the government agencies and Congress that uniquely qualified Washington as a world power center now for the most part have been diminished. All the old guys and gals sit around grumbling in their retirement — many not even yet old enough to be eligible for Social Security. Except for the regular appearances on TV of a few select retired military brass or opportunistic “Intel” types, the past brain power is squandered in consultancies at the think tanks and defense industries, both of whom are interested only in selling something to the USG.

Of course there is the usual disposal of highly qualified senior and even middle-ranking personnel who do not fit the political profile of the moment. This is done not merely by firing the top-ranking job holders, but also by shunting others of lesser rank into far less important posts irrelevant to their experience. The Defense Department is famous for this device. When Nixon and Reagan came into office, the personnel picture changed as radically as it did under Carter or Clinton. So, for those complaining about the Obama White House, there has been plenty of precedent.

Undoubtedly there is a useful aspect to all this winnowing out process. There are definite advantages to be gained by discarding the “old wood.” The problem, however, is in the balance between new fresh ideas and vigor and accumulated knowledge and experience. In the field of foreign affairs there is always a need for both, but knowledge and experience in Washington’s bureaucracy and legislative politics does not relate equally to far more hard-earned overseas diplomatic and intelligence activity. In the same manner, years in academia do not equate with the pressure-filled environment of intelligence analysis.

Hillary Rodham Clinton is a smart, well-educated veteran of the Washington wars — of all sorts. She has traveled nearly one million miles and visited 112 countries in four years. Unfortunately such roaming about does not equate to accomplishment. Depending on one’s personal and political viewpoint, Hillary Clinton has been either a great Secretary of State or an indefatigable tourist. The latter seems much more defensible.

Chuck Hagel’s background includes two Purple Hearts and a proven ability years ago to hump a sixty-pound pack along Vietnamese trails with people shooting at him. That gives him a basic understanding of war — but not of the intricacies of political/military coordination on an international scale. He’ll be learning on the job about working with American allies and those who aren’t. John Kerry has his own unique set of credentials. He’s quite qualified to play golf and tennis with Abdullah of Jordan, though he should definitely not get into a judo contest with the little king and certainly not Vladimir Putin.

The bottom line is that a great portion of the talent base for the United States’ international affairs lies fallow. So what’s new? Where’s John Quincy Adams when you need him?