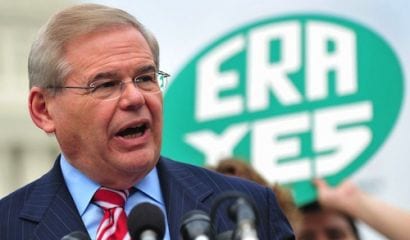 Prostitution is both legal and widespread in the Dominican Republic, where as many as 100,000 women are part of the industry in a nation that has become a major sex-tourism hotspot of the Caribbean. So it would not be a crime for Sen. Robert Menendez to have availed himself of such services during his trips to the Dominican Republic, as has been alleged.

Menendez has strenuously denied patronizing prostitutes, however, denouncing the accusations Monday in a CNN interview as “smears that right-wing blogs have been pushing since the election.” Any claim that Menendez consorted with hookers during his Dominican holidays “is totally unsubstantiated,” the New Jersey Democrat said. “It’s amazing to me that anonymous, nameless, faceless individuals on a Web site can drive that type of story into the mainstream.”

Alas, the senator’s indignant denial is false. That is to say, the “individuals on a Web site” who are driving “that type of story” are neither anonymous, nameless nor faceless. The reporter who originally broke the Menendez story is Matthew Boyle, a young investigative journalist who made a name for himself at the Daily Caller before hiring on more recently at Breitbart.com. Boyle is brash and aggressive — perhaps occasionally, a bit too aggressive — but there is nothing “anonymous” or “faceless” about him. Neither, for that matter, can that description be applied to Marc Caputo of the Miami Herald, or Neil Munro of the Daily Caller or any of the other reporters who have been breaking stories about the Menendez scandal in the past week, since the FBI raided the Palm Beach, Florida, offices of Dr. Salomon Melgen.

Melgen has been a generous political contributor to Menendez’s campaign, and reportedly donated more than $60,000 to the Democratic Senatorial Campaign Committee during Menendez’s tenure as DSCC chairman. Melgen is an affluent eye doctor and businessman whose friendship with Menendez dates back to the 1990s, and the New Jersey senator has admitted that he flew to the Dominican Republic aboard Melgen’s private jet. Exactly what Menendez did during his stays at Melgen’s mansion at Casa de Campo, a seaside luxury resort development, is a matter of dispute. At least one Dominican prostitute reportedly said last year that Menendez participated in a series of sex parties arranged by Melgen. “That senator also likes the youngest and newest girls,” the woman said in an April e-mail forwarded by the tipster and translated by the Daily Caller. The woman, whose services were reportedly acquired through an escort service called “The Doll Palace,” wrote that she had three trysts with Menendez in 2009: “The first one in February, and then in May and June. I recall his visit in June so well because that month was my 17th birthday.”

This is certainly a serious allegation because, while prostitution is legal in the Dominican Republic, having sex with 16-year-olds is definitely against the law. Yet Menendez insists that he never had sex with anyone at any time during his Dominican trips. “Now, nobody can find [the prostitutes],” Menendez told CNN’s Bash in their Monday interview. “No one ever met them. No one ever talked to them, but that’s where we’re at. So the bottom line is all of those smears are absolutely false and, you know, that’s the bottom line.”

Again, however, the Menendez denial is false. Matthew Boyle says he interviewed two of the women last year, and Boyle is adamant in his belief that these accusers were telling the truth. This presents a rather tricky dilemma for any journalist: Who is more trustworthy, a Dominican prostitute or a New Jersey Democrat?

That dilemma seemed to be solved Monday when one of the women whose name has been part of the accusations denied being a prostitute and said she’d never met the senator. “I’ve never participated in those activities,” 21-year-old Yaneisi Fernandez told the Spanish-language network Univision. “I don’t know those people or that man. … No, that is completely false. I don’t even know that man. Not even through TV have I seen him.” In reporting this denial, however, CNN said it was “not able to verify Fernandez’s story.”

If neither the accusations nor the denials can be verified, how can the truth be determined? Are statements by Dominican women only credible if they deny having sex with Democratic senators? If some elements of a story are proven false, does that invalidate the whole story? But what if some other elements of the story are definitely confirmed? This problem presents itself to journalists because, when a team of Miami Herald reporters began checking out the accusations against Menendez, they discovered that much of the information supplied by the tipster “Peter Williams” (believed to be a pseudonym) checked out as factually accurate. One key fact in the story was the identity of Dr. Melgen’s alleged former mistress, a Russian-born woman named Svitlana Buchyk.

“Public records show that a woman named Svitlana Buchyk got into a minor crash while driving a Chevrolet Impala on Miracle Mile in Coral Gables in 2010,” Kathleen McGrory and Melissa Sanchez of the Miami Herald reported. “The car belonged to Melgen’s wife. Buchyk gave Melgen’s North Palm Beach address as her own.” The beautiful blonde confirmed that “she had worked for Melgen in the past. But Buchyk wouldn’t answer questions on the type of work she did.” If Buchyk was vague about the nature of her “work” for Melgen, the tipster Williams was quite specific, describing her as “one of the most regular participants in the activities” with Melgen and Menendez in the Dominican Republic. Boyle published a photo of her Monday and reported that a Florida court case in 2002 found that Melgen spent $700,000 on another woman with whom he had “an intimate romantic relationship.”

It is the relationship between Melgen and the senator, however, that appears to be the focus of the investigation that led to last week’s FBI raid in Palm Beach. Melgen had reportedly received help from Menendez is the matter of a port-security contract between a company owned by Melgen and the Dominican government. That contract could be worth as much as $50 million a year for 20 years — that is, a total of one billion dollars — except that Dominican officials refuse to honor what they have condemned as the “exorbitant” terms of the contract. Melgen’s financial situation looks shady; he reportedly owes the IRS $11.1 million. But if he could get the U.S. government to pressure the Dominican Republic into honoring that billion-dollar contract, Melgen’s money worries would be over.

Unfortunately for Melgen, however, Matthew Boyle broke the story less than a week before Election Day last fall and, while the mainstream media ignored Boyle’s exclusive at the time, now the potential political ramifications are quite serious. Even if it cannot be proven that Menendez consorted with hookers, underaged or otherwise, during his visits to Melgen’s Caribbean luxury resort, the New Jersey Democrat’s connection to his Florida benefactor is sure to be subjected to intense scrutiny now. The recent appointment of John Kerry as Secretary of State created a vacancy in the chairmanship of the Senate committee where Menendez is now the ranking Democrat. Some might say it would not be entirely fitting, all things considered, for the scandal-plagued Menendez to become chairman of the Committee on Foreign Relations. If nothing else, the punch-line opportunities could prove impossible for late-night comedians to resist.