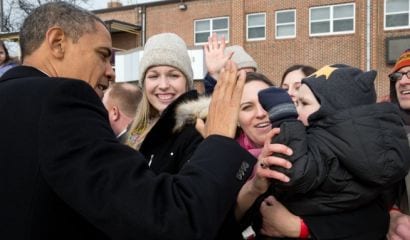 Since the shooting at Sandy Hook Elementary in Newtown, Connecticut, on December 14, 2012, President Obama has made eight public statements regarding gun violence. His most recent remarks took place on Monday in Minneapolis.

Consider these remarks made by President Obama on January 16, 2013, which are fairly representative of his statements over the past few weeks:

The right to worship freely and safely, that right was denied to Sikhs in Oak Creek, Wisconsin. The right to assemble peaceably, that right was denied shoppers in Clackamas, Oregon, and moviegoers in Aurora, Colorado. That most fundamental set of rights to life and liberty and the pursuit of happiness — fundamental rights that were denied to college students at Virginia Tech, and high school students at Columbine, and elementary school students in Newtown, and kids on street corners in Chicago on too frequent a basis to tolerate, and all the families who’ve never imagined that they’d lose a loved one to a bullet — those rights are at stake. We’re responsible.

Well, what about the right of our military personnel to carry out their oath to defend our Constitution against all enemies, foreign and domestic? Surely that was compromised on November 5, 2009, when Nidal Malik Hasan shot and killed a dozen military personnel, one civilian and one unborn child at Fort Hood. Surely these 14 people were also victims of gun violence.

And yet President Obama has not once seen fit to mention those who died at Fort Hood during any of his public remarks on gun violence over the past seven and a half weeks.

Now I am not the first person to mention Obama’s omission. Following the vigil in Newtown in which Obama spoke of Tucson, Aurora and Oak Creek, Mark Levin pointedly asked, “What happened to Fort Hood? How come he didn’t mention Fort Hood?”

But the fact that Obama still hasn’t uttered a word about Fort Hood in this entire discussion about gun violence nearly two months after the fact, it is a question worth asking once more.

From where I sit, there are two reasons that Fort Hood does not traverse President Obama’s lips and both of them open a can of worms for the White House.

Nevertheless, it is important to remember that the death toll at Fort Hood could have been much, much higher if not for two Killeen police officers who shot and paralyzed Hasan. This brings me to the second reason Obama does not mention Fort Hood. Unlike Tucson, Aurora, Oak Creek, and Newtown, the assailant was subdued by people carrying guns. Although police officers were responsible for stopping Hasan, Obama sees guns as the problem, not part of the solution. Thus it isn’t in his interest to mention Fort Hood when discussing gun violence.

If President Obama really wants to have an honest national conversation about gun violence, it would behoove him not to sweep the Fort Hood massacre under the rug. But since when do demagogues want an honest conversation about anything, especially where it concerns our liberties?