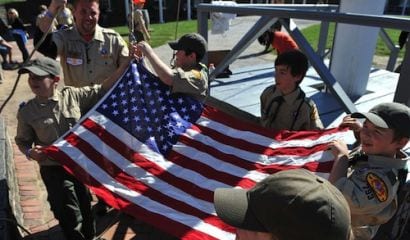 Today the Boy Scouts of America’s (BSA) National Executive Board may vote to revoke its longtime prohibition on homosexuality within membership and among adult Scout leaders. Instead, a proposed new policy would allow local units to set their own standards. The Scouts are being pressured by corporate sponsors, reportedly including UPS, Merck, and Intel, which are themselves pressured by LGBTQ groups. About 70 percent of Scout groups in the U.S. are sponsored by church or other religious groups, most of whom officially disapprove of homosexuality.

There are 2.7 million boys in the Boy Scouts of America, with over 1 million adult leaders, in 111,000 local units. Defenders of the BSA’s current policy cite Canadian scouting having lost over half its membership in five years after liberalizing its membership standards in 1998, including accepting open homosexuality.

The BSA’s Religious Relationships Task Force, meeting Monday, February 4 in Irving, Texas, unanimously asked the BSA to delay any decision about a change in policy pending more participation from the religious groups that host Boy Scouts. Top BSA officers were present for the two hour meeting, which was dominated by talk of the policy change, and where remarks were often emotional. The BSA executives said the policy shift was against their own beliefs but they were responding to counsel from attorneys and others about the changing cultural climate. Although BSA executives had previously informed some of the largest faith groups, smaller ones were not. Participants at the meeting included Christians, Jews and Muslims.

Meanwhile, some church and pro-family groups sponsored an ad in USA Today also on February 4 urging the Boy Scouts, who won a Supreme Court ruling in 2000, to hold firm to the current policy. Ad sponsors included the Family Research Council, the American Family Association, Concerned Women for America, and the Southern Baptist Convention’s Ethics and Religious Liberty Commission.

The ad declared: “Every American who believes in freedom of thought and religious liberty should be alarmed by the attacks upon the Boy Scouts, who have had core convictions about morality for 100 years.” It noted: “Every Scout takes an oath to keep himself ‘morally straight.’ The Boy Scouts have every right to include sexual conduct in how they define that term. Many of our organizations stood with the Boy Scouts when the Supreme Court of the United States upheld their right to maintain their membership standards. To compromise moral principles under political and financial pressure would teach boys cowardice, not courage.”

Catholic Churches are the third-largest religious sponsor of Scout units, with over 8,500 groups and nearly 300,000 Scouts. The National Catholic Committee on Scouting also expressed hope that the Boy Scouts would retain their current stance, and that local Scout supporters would assert their views. Mormons are the largest religious sponsors of Scouting, with 38,000 units and 420,000 Scouts. Although the Church of Jesus Christ of Latter-day Saints disapproves of homosexual behavior, it has not publicly commented on the Scouts’ most recently proposed policy change.

The Mormons and United Methodists, plus other major churches, endorsed amicus briefs supporting the Scouts’ policy during the litigation culminating with the 2000 U.S. Supreme Court ruling in defense of the Scouts’ policy. But this time, oddly, United Methodist officials, whose denomination has 11,000 Boy Scout units and over 370,000 Scouts, declined to defend the Scout policy. The United Methodist Church officially disapproves of homosexual behavior, prohibiting both actively homosexual clergy and any celebration of same-sex rites. But the president of the General Commission of United Methodist Men, which oversees the church’s Scouting programs, endorsed the policy change. He declared that United Methodism opposes discrimination based on “sexual orientation,” without acknowledging the church’s position on homosexuality. And he explained that the new proposed policy would permit local churches to “recruit the scouts, the leadership of your troop and pack reflects the traditions and values of your faith community.”

Of course, the United Methodist official failed to admit that the Boy Scouts’ proposed local option on sexual standards certainly will not mollify the outside pressure groups, including corporate interests, demanding the Scouts to renounce all “discrimination.” This new proposed policy likely would be only a relatively brief transitional step towards full affirmation of homosexual Scout leaders and ongoing pro-LGBTQ advocacy as intrinsic to a new nondiscrimination policy.

The New York Times editorialized that the proposed new “local option” Scouting policy would be “unprincipled,” noting this “partial move should hardly satisfy former donors who have been repelled by the Scouts’ discriminatory ways.” The Times also observed that the new proposed policy undermines the Scouts’ previous court victory and would “inevitably invite litigation.” No doubt.

Politically correct corporations threatening the Boy Scouts could cost hundreds of thousands if not millions of dollars. But the churches and other religious groups that sponsor or provide most of the Scouts’ membership are mostly traditionalist. Their withdrawal or at least ambivalence about the Scouts could set the Scouts on a permanent downward spiral.

Scouting arose in the Edwardian era, informed by muscular Christianity, which merged manly and Christian virtues, emphasizing service, self-denial, discipline and chastity. These old school virtues, especially chastity, are considered odd in the current postmodern era of radical autonomy and self-actualization. By surrendering, the Boy Scouts will purchase some temporary corporate and media support. But they likely will ultimately lose many who actually care the most about Scouting, not only churches, but also future youth who will be bored by politically correct banality.