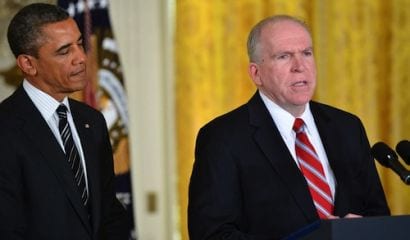 Unless the Constitution really is a suicide note, any American who joins al Qaeda or any other terrorist group that has avowed to attack us should have no more legal rights than any enemy we face on the battlefield. But since the 9-11 attacks, Congress, two presidents, and the courts have tangled us up in so many legal and policy knots that we’re now parsing terrorist ranks and duties to determine whether the enemy can be subjected to lethal attack.

We’re fighting a war that isn’t a war, Congress having only declared an “Authorization for Use of Military Force,” and only against al Qaeda, not all the terrorists who are engaged in war against us. We’ve not defined the enemy — radical Islam and all its adherents — and haven’t decided to fight the war in a manner calculated to win it decisively. So we are losing, as Iraq, Afghanistan, Pakistan, Egypt, Iran, and Syria — to mention only the top-ranking terrorist nations — are proving daily.

The controversy surrounding President Obama’s death-by-drone policy is the latest example of our refusal to deal with the reality of the war. It’s a legal contortion that should be unnecessary and would be if Congress had had the courage to declare war. It concludes that American-born al Qaeda leaders can be killed on order of any high-level administration official.

This is enough to drive even Obama’s most liberal allies nuts. In the confirmation hearing on John Brennan’s nomination to be CIA director, Sen. Ron Wyden (D-OR) objected to the president’s ability to kill American citizens overseas, saying that every American has the right to know when his government has decided to kill him.

Brennan had no answer other than to say that killing Americans who belong to al Qaeda is a last resort. But is it constitutional? Is it legal? Should anyone care?

Anwar al-Awlaki was an al Qaeda preacher and leader who mentored and probably ordered Abdulmutallab’s attack on an American airliner. (Abdulmutallab, the failed underwear bomber, was captured by fellow passengers before he could succeed in igniting his BVDs.) He was also the moving force behind Major Hasan’s Fort Hood massacre.

Before Anwar al-Awlaki was killed, his father sued in U.S. District Court to get his son’s name off the “capture or kill” list the White House maintains in secret. In December 2010, Judge John Bates dismissed the case on procedural grounds because he found, among other things, that it posed a political question in which the courts cannot intervene. He left open the question of whether a president can “order the assassination of a U.S. citizen without first affording him any form of judicial process whatsoever, based on the mere assertion that he is a dangerous member of a terrorist organization.”

The power to do precisely that was asserted in the “white paper” the administration released just before the Senate hearing on John Brennan’s nomination to be CIA director. Though there are many troubling aspects of this assertion of power — about which more in a moment — the legal argument the white paper makes should hold up in court if a court took jurisdiction over it.

The Obama administration asserts the right to kill a U.S. citizen who is an operational leader of al Qaeda — as Awlaki was — anywhere in the world, not just on a battlefield. The white paper says that if an “informed high-level official of the U.S. government” determines that the individual poses an imminent threat of a violent attack against the U.S.,” if capture is infeasible and the operation would be conducted consistent with the law of war, the person can be killed.

It relies on three principal authorities. First is the “Authorization for Use of Military Force,” the declaration passed by Congress in the aftermath of the 9-11 attacks which says we are — without using the term — at war with al Qaeda. Second and third are the Ex Parte Quirin and Hamdi decisions of the Supreme Court. In the 1942 Quirin decision, the court found that a U.S. citizen could be declared an enemy combatant and subjected to trial and execution by the military. Hamdi, decided in 2004, limited that authority by determining that a U.S. citizen who is an enemy combatant confined in a military facility located in a place where U.S. sovereignty is claimed, such as Gitmo, has the right to a habeas corpus hearing in a federal court. (The decision extends the habeas corpus right to all enemy combatants held in such a location.)

The white paper goes farther, saying that lethal action can be taken any time because it includes not only those people who are found to be planning an imminent attack but all operational leaders of al Qaeda and “associated forces” because they are “continually plotting attacks against the United States…”

This means that anyone who is an al Qaeda leader — or any terrorist leader — is presumed to be planning an attack and need not be determined to be an imminent threat. And it claims the power to order that person’s killing not just for the president, but for any “informed high level official” of the government.

This focuses the point that we’ve not decided we are really at war. If we were, the president would, under his constitutional authority as commander in chief, and the military and the CIA as his delegated forces, be able to kill any of the enemy’s adherents anywhere and any time, except those Americans who are fighting for the enemy and are captured inside the United States. Those people, as the Supreme Court held in 1942’s Ex Parte Quirin decision, are subject to imprisonment, trial and execution under military law, not the civilian courts.

If this were just a legal argument, that would be the point at which the White House’s argument ran aground. It is one thing to imprison an enemy combatant who is an American citizen and who retains the right to a habeas corpus hearing. It is another to order the killing of an American who, as Judge Bates wrote, has been declared a member of a dangerous terrorist organization on mere assertion.

The white paper apparently goes beyond the president’s — and the CIA’s – legal authorities. The CIA has classified lethal authorities, but they are constrained by law. Under the law, the president is required to keep congressional intelligence committees fully and currently informed of all covert operations. It requires that a classified presidential finding be delivered before the action is taken — or as soon after it as may be possible — to the chairmen and ranking members of both intelligence committees and to the House Speaker, minority leader and their Senate counterparts.

The covert operations law functions to limit presidential power, but it was never intended to be a substitute for constitutional due process, which requires notice to the opposing person and an opportunity to be heard in his defense. It is also not an unconstitutional restraint on the president’s powers to fight a war. But we’re not in a war, say Obama and his liberal allies. They’re attempting to outlawyer the enemy, not outfight him. The result is a legal muddle that no one is likely to resolve any time soon.

Some have proposed a terrorist death warrant court to function in secret like the Foreign Intelligence Surveillance Act court, which is specifically structured to work quickly and in secret. But courts aren’t going to be handing out death warrants quickly. Any defense — provided by a secret non-governmental attorney — would have to be able to discover the government’s evidence and gather its own to present even the least defense. Even if the court functioned in days rather than months, it can’t function quickly enough to ensure that a terrorist won’t escape. The well-planned operation that killed bin Laden was the exception. The idea of a new court hearing the kill-by-drone cases would ensure the failure of most operations.

It may be that Congress could amend the covert action law to provide some congressional notification of operations intended to kill American citizens. That, too, won’t be a substitute for due process.

The Constitution says that an American levying war against the United States is guilty of treason. Our immigration laws say that anyone who takes arms against the United States — or even joins a military engaged in war against us — shall lose his citizenship. That should be enough, coupled with the president’s powers as commander in chief, to send in the drones or special operations teams against any American-born member of al Qaeda or any other terrorist group that has sworn America’s destruction.

Let’s stop trying to outlawyer the enemy. Let’s outfight him.