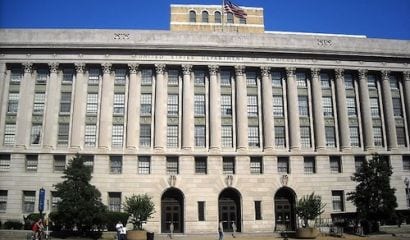 Having long been appalled by America’s Soviet-style system of agriculture, I continue to doubt the Republican Party’s seriousness regarding reform, i.e., budget cutting, of this improvident system of rent-seeking by one of the wealthier sectors of the economy.

Now, I fear, Republicans may be upstaged and out-flanked by the Democrats. If this happens more power to the party of Jefferson and Jackson and shame on the party of Lincoln.

Senate Democrats are seriously considering cutting farm subsidies as part of a forlorn attempt to put together a “balanced” substitute for the straight-out cuts to discretionary spending, share and share alike, between domestic and defense spending.

I refer, of course, to the dreaded “sequestration” soon upon us. I have previously written on how I have learned to love the sequestration. Given the intransigence of the Senate and White House on any rationale cuts of domestic spending (except for defense) or restructuring of entitlements, there appears to be no other way to rein in Washington’s mad rush to national ruin. As an old friend of mine said, sometimes you need to hit a donkey over the head with a 2 x 4.

Notwithstanding my embrace of the blunt instrument of sequestration, I certainly appreciate that, in a more rational world, we should set priorities and cut those programs that are useless, unjust, and of low priority relative to higher ones such as protecting international shipping lanes with a robust naval force. The House GOP caucus has, in fact, clearly stated their hope of doing so on a bipartisan basis only to be rebuffed with more calls by the President for tax revenue.

Now it seems that the Senate Democrats are looking to cut direct subsidies to farmers as an offset in sequester bargaining as reported last week by David Rogers in Politico. The idea would be to cut the agriculture subsidies and restore other spending that would otherwise suffer from the impending across-the-board sequestration cuts commencing on March 1. Unfortunately, they also want a 50-50 blend of cuts and taxes. But they are onto something regarding the reduction or elimination of some subsidies for agriculture.

Senate Agriculture, Nutrition and Forestry Committee Chairwoman Debbie Stabenow (D-Mich.), a liberal stalwart and long-time advocate for labor, has indicated her desire to cut, in Rogers’s words, “an outdated system of direct cash payments to [agricultural] producers that still costs taxpayers close to $5 billion a year and has long been a target for reformers.”

New estimates released last week by the Congressional Budget Office “peg the 2013 cost at $4.96 billion and $54.4 billion through 2023,” writes Rogers.

“I would prefer obviously to do it in the context of the farm bill but I cannot defend direct payments,” says Senator Stabenow. Regarding the ultimate amount of budget cuts the Senate majority finally settles upon, she stated that “Whatever is done has to be agriculture’s contribution to deficit reduction.”

She has been promised credit for any savings when she begins another attempt at a mark-up of a new Farm Bill in late March or April post-sequestration.

Stabenow would prefer to have dealt with direct cash payments in the reauthorization of the new Farm Bill, over which her committee has jurisdiction. However, debate over the reauthorization bill was discontinued when Republicans blocked floor debate and went with a one-year extension of the status quo in January that continued the crop payments for the time being.

Senator Stabenow savaged the GOP, claiming the partial farm bill extension, as part of the fiscal cliff deal, was “clearly” a means of protecting big government subsidies, as reported by Amanda Peterka, an E&E reporter, in Greenwire.

According to Peterka direct payments are paid to farmers regardless of how many acres are actually planted in a given year.

On C-SPAN’s “Newsmakers” series, the Chairwoman went after Senate Minority Leader Mitch McConnell (R-Ky.) for leaving the ag subsidies in place while cutting energy, conservation, and disaster programs for farmers and ranchers.

“They say they want more cuts, but when it comes to wealthy farmers that have high prices and don’t need subsidies, they seem very willing to jeopardize the rest of agriculture in order to be able to protect those subsidies,” said Stabenow. “That’s wrong in my book.”

Last year the new Republican ranking but long-time member on Stabenow’s committee, Thad Cochran (R-Miss.), voted against the Senate Farm Bill along with other Southern senators, including McConnell, on the grounds that its changes to the commodity subsidy title put major Southern crops at a disadvantage, says Peterka. The bill attempted to move away from subsidies to crop insurance, which is not without its own blemishes, i.e., subsidies for premiums. The House version also retained the price support program.

Again, the current crop insurance program leaves much to be desired as to efficiency and equity. According to the Washington Post’s editorial page, “Washington pays 62 percent of farmers’ premiums — at a cost of $7 billion for the 2012 crop year.” Moreover, “It reimburses administrative costs for the 15 insurance companies that sell the policies, to the tune of $1.4 billion in 2012, and also protects the companies against financial loss.”

The paper’s editors also claim that U.S. Department of Agriculture paid $11.4 billion to cover 2012 farm losses, much of it due to drought. Thus, “U.S. farmers could end up claiming $3.85 for every dollar in premiums, according to Kansas State University economist Art Barnaby.” This was for a year in which “the value of farmland and farmers overall earned $114 billion in net income, the second highest total in the past three decades.” (Emphasis added.) The crop insurance subsidy program has, over the last decade, cost $59.5 billion. “The more crops you grow, the more premium support you get (up to a maximum subsidy rate of 80 percent),” editorialized the Washington Post.

This whole scheme promotes excessive risk-taking and “favors big corporate farms over small family farms.” From this writer’s perspective, it also increases environmental externalities and the farming of marginal lands.

The Post also noted that Chairwoman Stabenow’s 2012 Farm Bill “would have compounded the error by expanding crop insurance to cover almost all farmers’ losses from price fluctuations as well as natural disasters” What a deal! Let’s face it: the myth of the Jeffersonian yeoman farmer is just that, a myth.

The Republican Party, dependent as it is on so many rural voters and high-producing agricultural states, is mostly mute or in a bad place on the matter of agricultural subsidies whether they be direct payments, crop insurance premium support or, let us not forget, ethanol subsidies and sugar cane tariffs. They stand tall when it comes to cutting food stamps for poor people but not agricultural subsides for farmers who participate in an economic enterprise that Robert Samuelson, the respected economics journalist, describes as “capital-intensive, high-tech, efficient — and now immensely profitable.”

“Running $10 billion to $15 billion annually, they do not do much good,” says Samuelson.

“For starters, they haven’t saved small family farms,” argues Samuelson. “Since the 1930s, when subsidies began, the number of farms is down 70 percent.”

Robert Samuelson maintains that “Farm subsidies are a metaphor for our larger predicament.”

“We no longer have the luxury-as we did for decades-of carrying marginal, ineffectual or wasteful programs. We can no longer afford subsidies for those who don’t need them or, at least, don’t need so many of them (including affluent Social Security and Medicare recipients),” says Samuelson.

“If we can’t eliminate the least valuable spending, then we will be condemned to perpetually large deficits, huge tax increases or indiscriminate cuts in many federal programs, the good as well as the bad,” warns Samuelson.

The GOP needs to develop some street cred on ag subsidies and not let Senate Democrats get around its right flank on fiscal issues through a quick two-step between direct agricultural payments and subsidized crop insurance premiums. It is time to cut both programs along with ethanol subsidies and sugar tariffs, too.