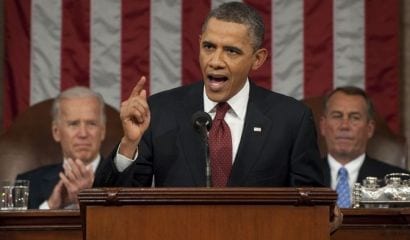 At this stage in our nation’s decline, does anyone still care what Barack Obama thinks or says about “the state of the union”?

That’s a decline of 28 percent in four years.

The president will almost certainly lay an even bigger egg this year than he did last year. If the New York Times is correct in the preview offered in Sunday’s paper, this year’s SOTU will be almost the same as last year’s –– only longer, duller, and even more divorced from reality. The Times reported:

President Obama on Tuesday will move beyond of the politics of the moment to define a second-term agenda built around restoring economic prosperity to the middle class, using his State of the Union to unveil initiatives in education, infrastructure, clean energy and manufacturing.

… [He] will insist that only “a thriving middle class” can stimulate long-term growth and that Americans must be given the tools to succeed.

… His call for new government investments… is an effort to shift the emphasis away from reducing the deficit and will serve in part as an answer to Republican criticism that he has not focused enough on jobs.

So Obama is still looking for the government to act not just as nanny, but also as the great engine of growth! And to hell with the deficit! What a surprise that will be to most viewers –– assuming there are any apart from the pundits, who are paid to pretend that anything that the president says is news.

Neither he nor his friends at the New York Times seem to have noticed how the Middle Class –– as the supposed beneficiary of the “new government investments” –– has floundered as a result of all the generous “investments” that the government made over the past four years.

In its lead editorial on August 27 of last year (“Negative $4,019: The Obama Years have been brutal on middle-class incomes”), the Wall Street Journal observed:

In January 2009, the month President Obama entered the Oval Office and shortly before he signed his stimulus spending bill, median household income was $54,983. By June 2012, it had tumbled to $50,964, adjusted for inflation. That’s $4,019 in lost real income, a little less than a month’s income every year.

Unfair, you say, because Mr. Obama inherited a recession? Well, even if you start the analysis when the recession ended in June 2009, the numbers are dismal. Three years after the economy hit its trough, median household income is down $2,544, or nearly 5 percent.

I believe that more and more people –– including many of those who voted for him –– are on to the fact that President Obama has nothing of substance to say on any issue of real importance.

He isn’t qualified to talk about bringing about a sustained economic recovery… or about fixing entitlements, defusing the federal debt time-bomb, initiating real health care reforms, or doing something to save Israel from a nuclear holocaust.

Still less does he have any policy (other than sniffling apologies and appeasement) for dealing with the growing scourge of Islamic extremism, which happens to be the biggest single threat to global peace and stability.

No doubt the president will spend a fair amount of time tomorrow night talking about the need for stricter gun control laws in the aftermath of the massacre of the innocents at Sandy Hook. But that is another one of his faux issues — proposing feel-good “changes” that won’t make any difference.

As much as the president deplores almost every kind of gun violence, he still cannot get around to deploring the gun violence perpetrated by Nidal Malik Hasan who shouted “Allah Akbar” as he slaughtered 14 fellow soldiers and one civilian at Fort Hood on November 5, 2009. The Obama administration deemed this an act of “workplace violence” rather than terrorism. And in his intense concentration on the issue of gun violence post-Sandy Hook, Obama has yet to mention Fort Hood — where even greater loss of life would have occurred if not for two police officers who shot and paralyzed Hasan (see Aaron Goldstein’s article in TAS on 2.5.13).

In last year’s election, President Obama didn’t win a debate; he won a popularity contest, and he did it by assiduously avoiding serious discussion of major issues and diverting attention to a succession of side-issues and non-issues –– with the biggest of those being the base canard that the top one percent of taxpayers are under-taxed relative to other groups (in 2009, the top one percent paid 39 percent of all federal incomes taxes, or three times their share of income at 13 percent).

In other words, a large number of people voted for Obama who thought ill of him as a problem-solver. It was these people who put him over the top and who set the stage for tomorrow’s fiasco –– when the man who has so often said that “We can’t return to the failed policies of the past” will once again be calling for more of the same policies that failed so badly during his first term.