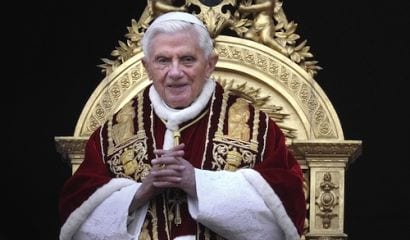 On Benedict XVI’s papal coat of arms appears a beast of burden (a bear with a pack-saddle), a symbol of the reluctance and dutifulness with which Benedict served in the Vatican. In fact, he had once asked Pope John Paul II if he could leave Rome and return to Germany. But the pope asked him to stay and continue to serve as the Church’s head of doctrine.

After John Paul II’s death, Benedict emerged as the indispensable man, without the least bit of angling for that role. He didn’t seek the papacy; it simply fell upon him. He had hoped the college of cardinals would select someone else. But his acute intellect, grasp of the Church’s crisis, and closeness to John Paul II made him the obvious choice.

Given this background, his resignation appears more understandable. He entered the papacy humbly and now leaves it humbly. His resignation is a great loss for the Church and the world. He represented the unity of reason and faith at a moment when the world was fast losing both. Between the West’s culture of abortion and the East’s culture of jihad, he stood as the civilizational center for life.

The media verdicts so far on his supposedly inconsequential and failed pontificate have been useless, reflecting nothing more than the progressive prejudices of reporters and pundits. Long after their spiteful articles have yellowed, his encyclicals will be read.

The truth is that they didn’t like him from the start, treating the elevation of a believing Catholic to the papacy as somehow “controversial.” Bill Keller, the former executive editor of the New York Times, once blurted out that “the struggle within the church is interesting as part of a larger struggle within the human race, between the forces of tolerance and absolutism.” That is the only prism through which the media ever saw Benedict: he fell on the wrong side of the progressive “struggle” and so became a target for endless media bias.

All the coming coverage of the papal election, sure to be absurdly ill-informed and tedious, will turn on that same standard. Candidates who appear sympathetic to the “forces of tolerance” will receive glowing coverage for weeks while the Church is lectured about the need to “modernize” and avoid a “contentious” pope. Modern liberals simply can’t rest until the Church elects a liberal pope. Hijacking the Church for their own ideological purposes has long been their goal. They dream of a pope giving his imprimatur to the sexual revolution and socialism. Then at last the “forces of absolutism” will have been defeated!

By absolutism, the Kellers ultimately mean God. That’s the absolute authority they seek to overthrow. They numbered Benedict among their historical enemies for refusing to join them in removing God from religion. He wouldn’t swallow the secularist acids they dish up as “dialogue” and so he had to be dismissed.

But historians decades from now will take his pontificate seriously. It stands as an important step toward the restoration of order and orthodoxy within the Church after many years of scandal and foolishness. While plenty of dysfunction is still on display, Benedict did what he could to curb it. Contrary to the media’s spinning, he inherited these crises; he didn’t create them.

Indeed, the moments in his pontificate that the media has worked hardest to try and trivialize and discredit will hold up the best: his battles with the “dictatorship of relativism,” his promotion of wider use of the traditional Latin Mass, his reinstitution of the ban on the ordination of homosexuals to the priesthood, his historic overture to disaffected Anglicans, his voluminous stream of speeches and writings that aimed at repairing the catechetical collapse within the Church; his insistence on the “non-negotiable” character of the natural moral law in shaping politics and culture.

He threw out an anchor to stop the doctrinal and disciplinary drift within the Church, which future generations will appreciate even if this one doesn’t. The pressure on modern popes, both from outside and inside the Church, to pander to the permissive society is enormous. He resisted that pressure, understanding that if the Church mirrors the morality and philosophy of the world she becomes just one more force for evil and delusion in it.

He was a reluctant pope but a conscientious one, whose legacy, like that of his namesake, will be to have scattered seeds of recovery along the dark fields of Europe and the world.