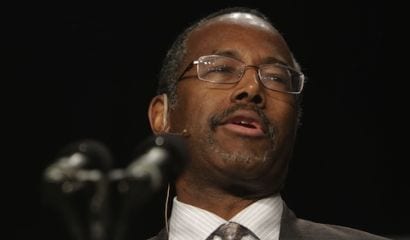 Liberals continue their hysteria over remarks made by Dr. Ben Carson at the National Prayer Breakfast last week. Carson, a prominent pediatric surgeon from Johns Hopkins University, dared to weigh in on healthcare — something he knows something about, and certainly knows better than Barack Obama. In the liberal mind, Carson committed a grave transgression; he had dared to disagree with Obama, and in Obama’s presence.

In a discussion of Carson’s moral effrontery, Candy Crowley, host of CNN’s State of the Union, asked her panelists whether they were offended by Carson’s comments. “He [Carson] was talking about the idea of, you know, weaving the Bible into some objections he appears to have with the president’s approach,” said Crowley, as if the president would never likewise do anything so outrageous. Count Democratic Congresswoman Jan Schakowsky among the offended. She told Crowley: “I think it’s… not really an appropriate place to make this kind of political speech and to invoke God as his [Carson’s] support for that kind of point of view.”

In truth, what the likes of Crowley and Schakowsky object to is the mere fact that someone publicly disagreed with Obama on healthcare, and especially in the context of faith. This was sheer blasphemy. For liberal Democrats, conservative Republicans are never permitted to use their faith to disagree; no, only liberal Democrats enjoy such freedoms. I could give a thousand examples illustrating the point; I’ve written entire books doing so. For now, however, here are some particularly salient examples involving Obama, liberals, and healthcare reform:

From the very first year of Obama’s presidency, the Religious Left (Obama included) incessantly claimed God’s support for their vision of healthcare reform. This was no surprise whatsoever, just as it was no surprise that the liberal press was not only not outraged but silently supportive. There was nary a whimper of protest from liberal journalists, let alone their usual howls (when a Republican cites his faith) of “separation of church and state!”

For instance, in August 2009, Obama addressed a “virtual gathering” of 140,000 Religious Left individuals. It was a huge conference call to liberal Christians, Jews, and other people of faith. Obama told them that he was “going to need your help” in passing healthcare reform. Christ-like, Obama penitently invoked a period of “40 Days,” a trial of deliverance from conservative evildoers. He lifted up the brethren, assuring them, “We are God’s partner in matters of life and death.”

Like a great commissioning, in the 40 Days that followed the Religious Left was filled with the spirit, confidently spreading the word, pushing for — among other things — abortion funding as part of an eternally widening “social justice” agenda. A group called the Religious Institute, which represented 4,800 clergy, urged Congress to include abortion funding in “healthcare” reform. To not help poor women secure their reproductive rights was unjust, declared the progressive pastors. As the Rev. Debra Hafner, executive director of the Religious Institute, complained, federal policy already “unfairly prevents low-income women and federal employees from receiving subsidized” abortions.

A group of 59 leftist nuns sent Congress a letter urging passage of Obamacare. This was in direct defiance of the United States Conference of Catholic Bishops, which insisted the bill “must be opposed” because of its refusal to explicitly ban abortion funding. The liberal media cheered on the nuns, gleefully exaggerating the sisters’ influence. In a breathtaking display, the Los Angeles Times beamed, “Nuns’ support for health-care bill shows [Catholic] Church split.” Amazingly, the Times reported that the nuns’ letter represented not 59 nuns but 59,000. Like Jesus with the loaves, the Times (normally militantly secular) had demonstrated miraculous powers of multiplication. Hey, anything for Obama.

The nuns’ brazenness was matched by Speaker of the House Nancy Pelosi, a Roman Catholic, who, in March 2010, invoked the Solemnity of the Feast of St. Joseph on behalf of Obamacare. She urged American Catholics to “pray to St. Joseph” — earthly guardian of the unborn son of God.

All of that was prelude to what happened the evening of March 21, 2010, A.D., with a rare vote not merely on a Sunday — God’s day — but the final Sunday in Lent, the week before Palm Sunday that initiates the Lord’s Passion. Obama’s healthcare bill was passed by his Democratic Congress. To Obama, Speaker Pelosi, and the Religious Left faithful, Jesus had gotten his healthcare package, and they had been his faithful handmaidens.

Amid that process, secular liberals in the press suddenly got religion — modern-day Sauls on the road to Damascus. Their political soul mates in the Democratic Party had spearheaded this “change” in the name of Jesus Christ, and liberal journalists found themselves moved to tears at the inspiring display. It was a rather radical departure from the eight years they had just spent scourging George W. Bush every time he merely confessed that he prayed. At long last, there was room for Jesus in the inn, so long as the Savior stood in “support” of the Democrats’ “progressive” agenda.

If all of that seems hypocritical enough from liberals, in light of their castigation of Dr. Ben Carson, consider this final glaring double standard:

The coup de grâce from Obama came in no less than the National Prayer Breakfast two years ago, February 3, 2011. Obama stated: “But sometimes what I can do to try to improve the economy or to curb foreclosures or to help deal with the healthcare system — sometimes it seems so distant and so remote, so profoundly inadequate to the enormity of the need. And it is my faith, then, that biblical injunction to serve the least of these, that keeps me going and that keeps me from being overwhelmed.”

Yes, Barack Obama, at the National Prayer Breakfast, had invoked his faith and the Bible on behalf of healthcare reform — much like he has done on behalf of gay marriage and a litany of other liberal agenda items.

Question for Ms. Crowley and Rep. Schakowsky and liberals everywhere: Was this appropriate? Are you offended? No, of course, you aren’t.

But now, ladies and gentlemen, here comes a heretic, one Ben Carson, pediatric surgeon, and a vile sinner. He disagreed with Obama and the mass of liberal faithful. He did so on the issue of healthcare, at a prayer breakfast. His price: political excommunication and denunciation. In Alinsky fashion, he must now be isolated and demonized. The Religious Left grabs its stones to cast them at the good doctor.

How dare Ben Carson mention healthcare at the National Prayer Breakfast! How dare he disagree with Obama!