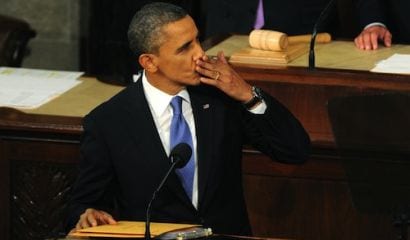 Barack Obama has long called himself the “middle-class President,” a rhetorical stance that sparks off Saul Alinsky’s cynical advice to his community organizers. Adopt a “middle-class identity,” Alinsky urged them. “Start them easy, don’t scare them off.” Crafty community organizers, Alinsky said, “will view with strategic sensitivity the nature of middle-class behavior with its hangups over rudeness or aggressive, insulting, profane actions. All this and more must be grasped and used to radicalize parts of the middle class.”

Obama’s emphasis on the middle class in his State of the Union address derives from this strategy. Duping them is always job one. “It is our generation’s task, then, to reignite the true engine of America’s economic growth — a rising, thriving middle class,” he said.  “A growing economy that creates good, middle-class jobs — that must be the North Star that guides our efforts.”

But nothing he proposed in the speech would help the middle class and much of it would hurt it. Since he has no intention of erasing the debt — he cast the sequester as “harsh” and proposed new spending that somehow wouldn’t add a “dime” in costs — eventual tax hikes on the middle class are an inevitability.

In the meantime, his regulatory fantasies to control the earth’s temperature, if enacted, will cost members of the middle class hundreds of thousands of jobs. It was clear from this speech that he still thinks himself capable of arresting the rise of the oceans.

Who knows, he might even be able to eliminate floods, droughts, and hurricanes too if we would just defer to science and let him work his magic: “But for the sake of our children and our future, we must do more to combat climate change. Yes, it’s true that no single event makes a trend. But the fact is, the 12 hottest years on record have all come in the last 15. Heat waves, droughts, wildfires, and floods – all are now more frequent and intense. We can choose to believe that Superstorm Sandy, and the most severe drought in decades, and the worst wildfires some states have ever seen were all just a freak coincidence. Or we can choose to believe in the overwhelming judgment of science — and act before it’s too late.”

So Democrats toss and turn at night worrying about generations not yet born? How touching. But somehow their concerns about the unborn children of the future don’t step them from aborting the unborn children of today. When not advocating climate change regulations for the children, Obama was advocating gun control for the children. Think of the all the birthdays and graduations, he said, that we won’t be able to celebrate if we don’t enact his specific gun control measures now. Somehow the missed birthdays of those aborted by his friends at Planned Parenthood don’t bring a tear to his eyes.

But if an unborn child does happen to survive in Obama’s America, he or she can look forward to a new and improved life in his “smarter” nanny state, starting with access to the finest pre-schools in the world or something like that. The nanny state can never get its hands on tots early enough, according to Obama. So much for a strong and self-reliant middle class.

To train them to tinker at shovel-ready jobs on his structurally deficient bridges to nowhere, he wants the public schools to grab them at an earlier age: “But today, fewer than 3 in 10 four year-olds are enrolled in a high-quality preschool program. Most middle-class parents can’t afford a few hundred bucks a week for private preschool. And for poor kids who need help the most, this lack of access to preschool education can shadow them for the rest of their lives.”

Obama is back to his “Life of Julia” fantasy, in which, sans parents and a husband, she can count on endless vistas of state-bankrolled individualism and protection. The nanny state will guarantee her quality education from pre-school to “higher education” (he demanded that Congress pass a new and improved “Higher Education” Act that will magically control tuitions) and an ever-rising minimum wage (Obama thinks $9 dollars an hour reasonable for now).

She can also count on his protection from “violence,” though not the violence of war. Obama heartily endorsed sending the nation’s “daughters” into the trenches, a line that washed over the audience without a standing ovation for some reason. Perhaps they were tired from all the rote standing up. The line came late in the speech. Then again, the glazed-look of the pols may come from one of those lingering “middle-class hang-ups” that Alinsky trained his cadre of community organizers to humor while the revolution unfolds.