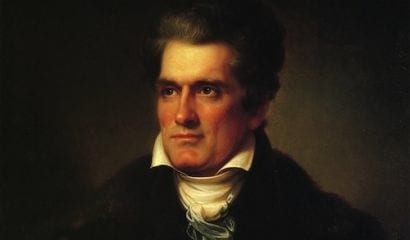 WASHINGTON—It has happened again. Sam Tanenhaus, the editor of the New York Times Book Review, referred to by Paul Krugman the other day as “a long-time conservative,” has essayed in the New Republic the modern conservative movement, and traced us all back to John C. Calhoun. I suppose our point of origin could have been more sinister. Sam could have traced us back to Nathan Bedford Forrest, the former Confederate General who went on to be an early member of the Ku Klux Klan, but John C. Calhoun is bad enough.

Of course, Calhoun is no kind of modern conservative. He is not even a typical conservative of the 19th century, at least outside the South. He would have made heavy weather of it in the north in the company of such conservatives as the Adamses or even the Virginia Founders such as George Washington.

Calhoun is commonly recalled as a brilliant political philosopher, a proponent of states rights, and a defender of slavery. I do not know anyone who defends slavery today, save for those who apologized for the Soviet Union. If Sam knows of such a dinosaur I suggest he be bold and take the fellow on in the pages of his Review. It would liven the place up. Next will come Prohibitionism, and I shall be eager to see which side Sam is on.

Actually the modern conservative movement was founded in the 1950s with an amalgam of anti-Communists, libertarians, and American traditionalists. As the years have gone on it has shown itself to be the most dynamic political movement in the country, picking up along the way sober-minded liberals (known as neoconservatives), Reagan Democrats, evangelicals, Tea Partiers, and even independents.

In the face of this Sam has been a bit flighty. In 2009, he brought out a book pronouncing The Death of Conservatism. Fourteen months later—just as Sam’s paperback came out—the Republicans swept into control of the House in one of the largest rightward swings in the history of America, nay, in the history of Democratic government. Yet not a single member of the Republican House supports Calhoun’s view of slavery.

Meantime the pollsters discovered that only 18-20 percent of the American people are, to use a superannuated term, “liberal”—they ought to be calling themselves socialists or possibly friendly fascists. Today around 42 percent of the American people are conservative, and with the independents who voted against Barack Obama last year thrown in that number climbs to around 57 percent—though I would say that number is only roughly conservative. I am looking forward to the 2014 elections.

Whether Sam belongs to that conservative consensus I very much doubt. When Krugman calls Sam “a long-time conservative” he is at his most tendentious. Sam is no conservative, and I have rather sadly come to the conclusion that he is not seriously anything. He has been absent from the fight for lower taxes and the struggle for sound money. He did not utter a word for Sarah Palin or Rand Paul or David Mamet or, not to put too fine a point on it, me. I as editor in chief of The American Spectator countered his book with a book of my own, full of facts and argumentation, and we chased him all over the globe for his response. He remained mum.

Neither has he appeared on the intellectual field of battle to support the hardliners in Israel. He has not joined in the revival of Constitutional fundamentalism or, so far as I am aware, sided with the Catholic Church or the Orthodox Jews who are fighting for the right to exercise freely their religion.

Incidentally, I have extended a friendly hand. Some years ago I invited him to a gathering I maintain in New York City called the Saturday Evening Club. There were there that night writers from the New York Post, the New York Sun, the Wall Street Journal, Fox News, the New Criterion, National Review, The American Spectator, and doubtless other publications. There were serious business people in attendance. I asked Sam to ventilate his opinions. He has never reciprocated in any of the editorial space he controls.

What do we get? We get being likened to the most famous defender of slavery. Tanenhaus does this in that noted conservative journal The New Republic. Tanenhaus is what columnist Krugman calls “a long-time conservative.” This is because the New York Times Book Review panned Krugman’s latest shrill demand that Washington end this Depression now—by sending money that it does not have.

Why is Sam running interference for this crowd? Well, it beats me. Instead of sneering at conservatives and trying to tar us as racists, he should come and see what is happening on the right. Our movement is plenty diverse, ethnically, racially, religiously, and, most impressively, intellectually. The Republican Party, too, has all kinds of exciting characters in it. The only one who remains out is poor John C. Calhoun. That is because of something Tanenhaus forgot to mention. Calhoun was a Democrat.