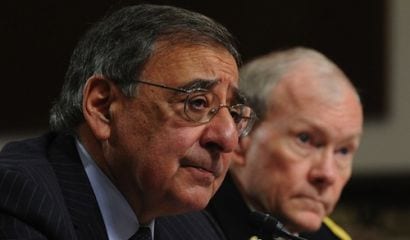 In a hearing last week, Republican members of the Senate Intelligence Committee were happy with their ability last week to suggest that President Obama’s lack of inquiry during the Benghazi attack last September 11 showed how removed he was from an urgent political /military issue. While focusing pro and con on the supposed inability of Mr. Obama to have serious concern over his beleaguered representatives in Libya, the senators, Democrat and Republican alike, missed completely a principal issue in the Secretary of Defense’s testimony.

Leon Panetta had tried to explain that time and distance precluded the possibility of doing anything to intervene militarily to aid the Benghazi mission either at the main facility where Ambassador Stevens and his information specialist, Sean Smith, were or at the CIA base annex two miles away. The entire attack lasted nearly eight hours and an unarmed surveillance drone was on-station within 90 minutes of the initial attack. During the firefight six officers from the Tripoli embassy flew in on a chartered civilian plane to Benghazi’s Benina International Airport and made their way to the compound, according to Panetta and previous briefings.

Secretary Panetta went on to say that U.S. Navy FAST teams (Fleet Anti-Terrorism Security) were in Spain, but these were too far away to arrive in time to assist the embattled Americans. Panetta even mentioned that the FAST teams would have had to fly first to Segonella, Italy, for onward flight to Benghazi. He never explained why this route was essential. The implication was that the distance was such that refueling or perhaps special equipment was necessary to be procured from Segonella Naval Base. This ignores the fact that Benina International has commercial flights daily stopping to and from Europe — including Madrid — on the route to East Africa. A Boeing 747 flight from the U.S. Naval Base at Rota, Spain, would have taken only about three hours at an average cruising speed of 570 mph.

What was never mentioned or even questioned was why the Marine Force Recon unit supposedly stationed at Segonella was never considered a potential relief force as it was far closer than Rota to Benghazi. Is that Marine Force Recon unit simply a paper designation for Pentagon budgeting for a shadow TO&E (Table of Organization & Equipment)? In any case, FAST units (of which at least one was at Rota) are each specifically forward-deployed guard platoons of 115 Marines and one officer capable of immediate operational response to any alert notice. There is no question that in this time frame, even considering organizational delays, an initial retrieval force could have landed at Benghazi airport well before the actual firefight had ended. And who knew that in just under eight hours the entire affair would be over?

There isn’t a special operations trooper who wouldn’t have gone into Benghazi “blind” if it was necessary to rescue a contingent of Americans. The idea that critical intelligence must be gathered, analyzed, and evaluated before a SO force proceeds on a critical retrieval mission may be academically correct, but not strictly followed in real life critical combat rescue. U.S. special forces of every kind go into harm’s way when and where they are needed with little regard for themselves. It’s the mission that counts, and the mission clearly was to rescue the guys in Benghazi. For some reason this fact escaped Washington’s high military command.

Why is it that after over eleven years of combat in Afghanistan and Iraq that the Senate Intelligence Committee will swallow the story that no forces were available in adequate time and distance to relieve Benghazi? To begin with, why wasn’t some high ranking White House or Pentagon official on the phone to commercial airlines serving Spain to see who could aid in the mission by redirecting existing transport so the Marine FAST team could be wheels-up in minimal time if no military air assets were available? The concept of chartering or even commandeering available U.S. civilian transport has been in existence since the days of General Washington. When faced with a military crisis, such actions have considerable precedent.

What this all points to is that a Rota-based FAST platoon of appropriately trained and equipped Marines could have flown to Benghazi by any Boeing 747, and other heavier units could have followed later. It wasn’t even tried. That DoD having real-time notice of the attack on two official American installations could not or would not respond in a timely manner is a disgrace that reaches the level of dereliction of duty. Any enlisted man or junior officer having avoided similar action would have been brought up on charges before a court martial.

It is clear that even if the Secretary of Defense has been able to find some political cover to avoid personal responsibility, the Chairman of the Joint Chiefs, the Chief of Naval Operations (under whose direction FAST units are deployed), and the head of the Special Operations Command should receive formal reprimands at the very least. As Leon Panetta is already leaving, perhaps they should just all resign. The argument that they all needed White House approval before anyone of them could have taken definitive action just is not doctrinally or historically true. All they could have lost would have been their jobs!