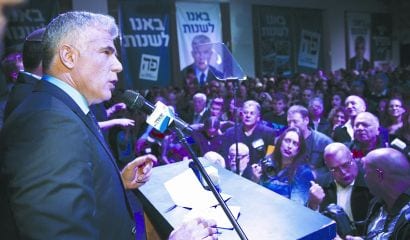 As Israel counted votes in its legislative election in January, your humble correspondent joined reporters at an election night event in Tel Aviv hosted by The Israel Project, where politicians and analysts from across the political spectrum either stopped by or (more often) called in to comment on the news. Among the most amusing was Tamar Zandberg of the far-left Meretz party, who urged the centrist and center-left parties to eschew a coalition with the right. She was only repeating a position her party had staked out in the campaign. But it rang especially hollow in light of the evening’s big news: Yesh Atid, a new centrist party founded by erstwhile journalist Yair Lapid, would hold the second largest number of seats in the Knesset after Prime Minister Benjamin Netanyahu’s Likud, which had merged for this election onto a joint list with the secular nationalist party, Yisrael Beiteinu. Netanyahu will again lead a governing coalition, and while negotiations over its exact shape are ongoing at press time, there’s little doubt that Lapid’s party will join.

Lapid’s success came as a shock to the international media. From the New York Times to the BBC, the established pre-election narrative pointed to a hard-right turn and a government that would be full of men ready to annex all or part of the West Bank. Several moderate Likudniks had been squeezed out in the Likud-Beiteinu merger, and the big story was supposed to be Naftali Bennett and his religious nationalist Jewish Home party—the focus of a 9,000-word New Yorker profile by David Remnick. The mistake here was viewing Israeli politics through the lens of the conflict with the Palestinians; this was a campaign as focused on domestic politics as any in decades. Bennett’s temporarily soaring poll numbers were driven by his charisma, and his background as a successful businessman and special forces veteran. He avoided talking about the Palestinians as much as he could, and when he couldn’t avoid it, his poll numbers fell back down to earth.

Lapid, on the other hand, ran a campaign focused on issues like the economy, education, housing reform, and the extension of national service requirements for the Haredim (also known as the ultra-Orthodox). The last issue was especially prominent—the law that allows the Haredim to defer service expired last year, and the question of how to replace it was punted to the next Knesset. (Remnick’s New Yorker piece managed not to mention this issue at all.) Labor leader Shelly Yachimovich likewise returned her formerly moribund party to the top of the center-left through a domestic focus. Running on the slogan “It could be better here,” Labor rebounded to nearly twice as many seats as it had in the last Knesset, and will now be the third-largest party. Presenting itself as something other than the party of the Oslo Accords was crucial to Labor’s resuscitation. Most Israelis, while supportive of a two-state solution, believe that the peace process is stalled for the foreseeable future for reasons that are outside Israel’s control, and have naturally turned their attention inward.

BACK IN WASHINGTON the following week, former senator Chuck Hagel, President Obama’s nominee for secretary of defense, floundered through his confirmation hearing, garbling, among other things, the president’s policy toward Iran. Hagel’s apparent confusion was, in the words of an anonymous Obama adviser, “somewhere between baffling and incomprehensible,” according to the New York Times, and could potentially undermine Obama’s diplomatic message that containing a nuclear Iran is not an option. Who thought it was a good idea to nominate this buffoon, anyway?

Among Hagel’s biggest boosters was J Street, an organization that disingenuously styles itself as “pro-Israel, pro-peace.” Hagel addressed the group’s first national conference, and its leaders have attempted to push back on criticism of his nomination with, among other things, a fundraiser with the witless slogan “Don’t smear Hagel, smear a bagel.” J Street is in part a creature of the Israeli far left—one of its cofounders worked for Meretz—which is attempting, through pressure from America, to push Israeli politics back to the left in quixotic pursuit of a revived peace process. But there’s a dishonesty at its core, as it cultivates the support of not only liberal Zionists dissatisfied with Israel’s politics, but also with anti-Zionists dissatisfied with Israel’s very existence. “Pro-Israel,” it turns out, can mean “anti-Israel.”

Hagel shares the J Street preoccupation with putting pressure on the Jewish state. He’s said that our alliance with Israel, while important, “must not come at the expense of our relationships with our Arab allies and friends.” In fact, Hagel has probably already dismayed our Arab allies, some of whom are nearly as horrified as Israel is by the prospect of a nuclear Iran. But Hagel views the region through the prism of “linkage,” the idea that the Israeli-Palestinian conflict is the source of all problems in the Middle East. “Like a stone dropped into a placid lake, its ripples extend out farther and farther,” Hagel says of the conflict in his 2008 book America: Our Next Chapter. It’s total nonsense, of course; after two years of upheaval from Libya to Egypt to Syria to Yemen, does anyone think the region would be a “placid lake” if only there were a Palestinian state?

But this is how Hagel thinks. And while he used his confirmation hearing to repudiate many of his past statements, he wasn’t really probed on the linkage question. The president who nominated Hagel, and his new secretary of state, John Kerry, are already making noises about attempting to revive the peace process. As Israelis turn toward internal concerns and away from the conflict with the Palestinians, is the second Obama administration poised to turn toward the Israeli-Palestinian conflict and away from more pressing matters in the region and around the globe? If so, we’re in for a long four years.