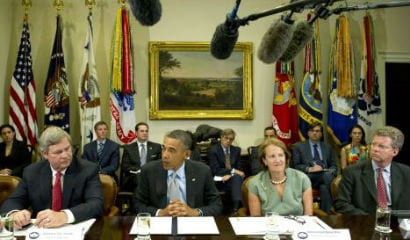 A FEW THOUGHTS about politics and an increasingly biased media in the weeks after Obama’s emergence as an openly leftist president—perhaps the first in U.S. history.

Gun control seized the headlines early on, but it’s not a good issue for Democrats. After the Newtown tragedy, the news media focused attention on what they promptly labeled “gun violence.” In the month after the school shooting, the NRA attracted 100,000 new members. Some limits on semi-automatic weapons may pass, and the shrinks will welcome more money for mental health, but the gun issue could prove counterproductive for the left. There’s a reason why Obama said nothing about it in his first term.

Immigration then rose to the top, but it won’t stay there. The Senate’s bipartisan plan seems to have been promoted primarily by Republicans eager to beat Obama to the punch. With support from 70 percent of Hispanics, Democrats don’t see much need for new laws. They want an (anti-GOP) issue, not legislation.

An immigrant myself, I am divided about the issue. We do need an influx of well-qualified people and a guest-worker program. Unrestricted immigration, which the U.S. enjoyed a century ago, worked well, but there was no welfare state at the time. Today, with a giant welfare state, the hazards are obvious. Polling on the issue is totally unreliable. Conservative safeguards in the proposed law probably mean that the Democrats will only pretend to support it. Either way, I don’t expect much to happen any time soon.

Some issues are difficult to disguise—gun control and abortion among them. Most people know what’s at stake, and the media must work extra hard to achieve its customary misdirection. The anti-abortion movement remains strong, despite blatant media opposition. On the day of the March for Life, for example, PBS NewsHour said that Roe v. Wade was “the Supreme Court decision that legalized abortion.” ABC News, ditto. Wrong both times. In some states abortion was already legal.

In fact, Roe decreed most laws against abortion, in all 50 states, to be unconstitutional. It removed power from the states and centralized it in the Supreme Court. Inaccurate reporting has allowed the press to claim that “polls show” that most voters support Roe. Misled voters think that overturning it would render abortion illegal. In fact, it would return decision-making to the states. Abortion laws would then resemble capital punishment laws—a patchwork. For obvious reasons, the “pro-choice” crowd would rather have the Supreme Court do their work for them than have to lobby in 50 states.

Big battles are likely over taxes and the budget. Here the issues are often misrepresented, obscuring them for many voters. “Deficit reduction” means tax increases, for example; tax increases are called “revenues”; “spending cuts” always mean spending increases—in the out years (but a little bit smaller than originally planned). And so on.

So budgets are tricky. The media become our interpreters and we know how that turns out. Taxes must be further raised, we’ll be told, but spending can’t be cut because the voters are firmly opposed. Today federal spending has risen to 24 percent of GDP, while revenues are 16 percent. Simplifying only a little, the GOP hopes to reduce spending; the Democrats to raise taxes (more than they already have).

Maybe Republicans should content themselves with blocking further tax increases and let the White House worry about deficits. The president is running the show, after all. The historic concern about deficits is that they cause interest rates to rise. But budget deficits have never been higher and interest rates have never been lower. When rates do return to normal levels, as presumably they must, they could rise quickly. Interest payments on the (huge) government debt will then threaten to engulf the budget. That will be Obama’s headache, not ours.

WHAT ABOUT GLOBAL WARMING, a top item on the liberal agenda? Over the last decade the globe has not warmed at all, so now it is called climate change. Almost any weather event then becomes relevant. The other day I attended a dinner on Capitol Hill with some libertarians, notably from the Competitive Enterprise Institute. They told me that global warming legislation stands no chance, but the Obama people will try to pursue it via regulation, using the EPA. Sen. Barbara Boxer has said as much.

Global warming is therefore another complex (and hazardous) issue. But the complexities cut both ways. With the elections over, the congressional Democrats now face incentives that sometimes differ from those of the White House. Warmist ideologues and green fanatics certainly want to shut down oil and gas production wherever they can, and to stop the Keystone oil pipeline in its tracks. Sierra Club Executive Director Michael Brune even said that in the fight against Keystone, the Sierra Club is willing to engage in civil disobedience, despite its ban on such tactics.

Another possibility, I’m told, is that in pursuit of their holy grail of a carbon tax, the warmists may try to sell it as a gas tax cut (popular). Then they will append a carbon tax inconspicuously, and if that works, raise it far higher later, in compliance with green desires.

Democratic senators facing re-election are, however, likely to have different ideas. Bonner Cohen with the National Center for Public Policy Research cited the recently developed Bakken oil field in North Dakota. That oil is now being transported by rail to a refinery in Philadelphia that was on the verge of closing down. Thousands of union jobs will be lost if the Sierra Club loons get their way. Overall, Democratic senators from as many as 10 states could be hurt by renewed enviro-fanaticism. North Dakota has the lowest unemployment rate in the nation and would like to keep it that way.

WORRY IF YOU SEE reports of a looming “grand bargain.” It always means the same thing. The GOP has not only abandoned its principles, but doesn’t even realize that it has done so. Why is the Tea Party so unpopular with the media? Because it has figured out these rhetorical tricks and is slowly turning the GOP from a Rockefeller party into a conservative party.

As a sign of how far the media have moved to the left, consider the case of commentator John Dickerson, who was made CBS News political director. Writing for Slate, he advised Obama to “go for the throat,” “pulverize” and “declare war on” the GOP. Media people talk that way to each other, but it’s surprising that CBS News has sunk so low. Time has also moved way to the left, and after Jim Lehrer retired, PBS NewsHour tilted left to align itself with National Public Radio. In the New Yorker, Hendrik Hertzberg proclaimed liberalism’s return.

You will have read that we are lifting the ban on women in combat. How about winning a war before we further indulge our progressive tendencies? When was the last time we won a war? Grenada in 1983? A few hundred Cuban troops were involved on the other side. But that U.S. involvement was condemned by the UN General Assembly as “a flagrant violation of international law.” We didn’t make that mistake again.

We are now in the process of losing our 11-year war in Afghanistan. Not that anyone wants to put it so bluntly. And here I don’t blame Obama, although he should have quit that pointless, trillion-dollar conflict years ago. Someone should note the extent to which we persisted in occupying the country in order to bring women’s rights to Afghanistan. Check “Human Rights Watch” for details.

American-style liberalism, like Communism under Lenin, has global aspirations. Notice the phenomenal amount of space devoted to the death of a single woman in a bus in New Delhi. We lost on the issue of women’s rights in the Hindu Kush, but U.S. women here won the right to be killed in combat. You win some and you lose some.