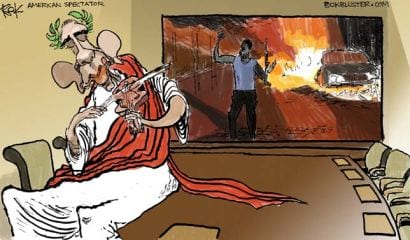 The late Ted Kennedy became known as “the Hero of Chappaquiddick” for leaving a young lady to die after accidentally driving his car off a bridge on the night of July 18, 1969. Kennedy, who swam free, said nothing to police until 10 a.m. the following day.

In the subsequent inquest, John Farrar, a professional diver and the captain of the Edgartown Fire Rescue unit on Chappaquiddick Island in Massachusetts, discovered the body of Mary Jo Kopechne in the well of the backseat of the overturned and submerged car. He said in his testimony:

It looked as if she were holding herself up to get a last breath of air. It was a consciously assumed position.… She didn’t drown. She died of suffocation in her own air void. It took her at least three or four hours to die. I could have had her out of that car twenty-five minutes after I had the call. But he (Ted Kennedy) didn’t call.

President Barack Obama deserves similar obloquy as “the Commander-in-Chief who went AWOL” on September 12, 2012 — during the eight-hour siege in which heavily-armed terrorists burnt the U.S. consulate in Benghazi, Libya, and killed Ambassador Christopher Stevens and three other Americans.

To be sure, there are major differences between the two events. Unlike Kennedy, the president did not directly endanger the life or lives of others. Like Kennedy, however, he went missing when he could have tried to mount a rescue mission, or at least weighed the options and seriously considered doing so.

If nothing else, Obama is guilty of excessive passivity … indeed, dereliction of duty … on the night of Sept. 11, 2012. And so, too, were others high in the administration, including three outgoing members — U.S. Secretary of State Hillary Clinton, Secretary of Defense Leon Panetta, and Joint Chief of Staff General Martin Dempsey — along with the Chief of Naval Operations (responsible for the deployment of FAST anti-terrorist teams), and the head of the Special Operations Command.

Though the details were spare, after months of stonewalling by the Obama administration, the testimony given by Secretary Panetta and Gen. Dempsey late last week was dramatic.

They told how they had spent a half hour meeting with the president on Sept. 11 at 5 p.m. Washington time briefing him on the mass demonstration at the Egyptian embassy and the beginning of an all-out attack (then 90 minutes old) on the U.S. Consulate in Benghazi.

Through their testimony, we learned of the strange indifference of the president to the events that were unfolding on this obviously historic date for America and its sworn enemies (the eleventh anniversary of Nine Eleven 2001). According to Panetta, the president told them that the response to the attack was “up to them.” And that was it:  According to Panetta and the general, they had no further contact with the president (or, for that matter, Secretary Clinton) the rest of the evening or night.

Two other important details from the Panetta and Dempsey testimony:  They knew full well that it was a terrorist attack. Despite that, neither the president nor they felt compelled to reestablish contact over the next several hours. There were no phone calls from the president to the defense secretary to check up on the situation later that evening or night. Nor did he or Dempsey communicate with Clinton.

None of this seemed important enough for any of the principals — starting with the president — to think of calling for brainstorming and battle planning in the White House Situation Room.

A month and a half after the attack (and a couple of weeks before the Nov. 6 election), Panetta claimed:

The basic principle is that you don’t deploy forces into harm’s way without knowing what’s going on, without having real-time information about what’s taking place.… And as a result of not having that kind of information … (we) felt very strongly that we could not put forces at risk in that situation.

But that is far from being any kind of a basic principle. In this case, the “fog of war” seems to have much less of a factor than the deliberately contrived “fog of cover-up.” As George H. Wittman described in a detailed article on this page yesterday, there were, in fact, a number of military options available that could have been used to deliver potentially decisive military force to the besieged embassy within a matter of a few hours. Many other experts in addition to Wittman have made the same point.

Nevertheless, the Obama administrative slept — or, if it stayed awake, it was for a completely different purpose than saving American lives far away from home: It was to save their own necks and reputations over the course of the upcoming election.

There were two other notable events that transpired on Sept. 11, 2012.

First was a statement from the U.S. Embassy in Cairo (and hence from a unit of the State Department), which was made after thousands of Egyptian protesters earlier in the day had stormed the embassy and torn down the U.S. flag — replacing it with a black flag inscribed with the Muslim professions of faith: “There is no God but God and Mohammed is his prophet.”  The statement said:

The U.S. Embassy of the United States in Cairo condemns the continuing efforts by a misguided individual to hurt the religious feelings of Muslims — as we condemn efforts to offend believers of all religions.… Respect for religious beliefs is a cornerstone of American democracy. We firmly reject the actions of those who abuse the universal right of free speech to hurt the religious beliefs of others (emphasis added).

Among other people who took objection to that was Mitt Romney, who issued a statement of his own that went out on the evening of Sept. 11 (before anyone knew of the full extent of the calamity in Benghazi) saying:

Then came the next episode in the story — with the Obama administration’s whole-hearted embrace of the idea enunciated by the embassy in Cairo — that an obscure and indeed all-but- unknown film-maker in California had caused all the trouble by making a short and (to Muslims) blasphemous film about Mohammed — and that Romney should be attacked for “politicizing” the issue in the heat of a U.S. presidential election.

In the speech that Obama gave the next morning in the Rose Garden, with Hilary Clinton at his side, Obama denounced “acts of terror” only in general terms and alluded to the video, echoing the U.S. embassy in Cairo in saying: “Since our founding, the United States has been a nation that respects all faiths. We reject all efforts to denigrate the religious beliefs of others. But there is absolutely no justification to this type of senseless violence.  None. The world must stand together to unequivocally reject these brutal acts.”

After the Rose Garden appearance, Obama jetted off to Las Vegas and points west for fund-raisers and to meet with Hollywood pals. On Sept. 18 he was all smiles in appearing for a cream-puff interview on the David Letterman show where the two of them pulled long faces for only moment or two in consideration of the dead Americans in Benghazi.

It was on Sept. 16 that U.N. Ambassador Susan Rice made her now-notorious round of appearances on Sunday talk shows again blaming the deaths in Benghazi on the “Innocence of Mohammed” video. In reference to Benghazi, she told ABC”s Jake Tapper on “This Week”:

Our best current assessment, based on the information that we have at present, is that, in fact, what this began as, it was a spontaneous — not a pre-mediated — response to what had transpired in Cairo. In Cairo, as you know, a few hours earlier, there was a violent protest that was undertaken in reaction to a very offensive video that was disseminated.

We believe that folks in Benghazi, a small number of people came to the embassy to — or to the consulate, rather, to replicate the sort of challenge that was posed in Cairo. And then as that unfolded, it seems to have been hijacked, let us say, by some individual clusters of extremists who came with heavier weapons.… And it then evolved from there.

Obviously, the president and his top national security advisers did not want to deviate from his often stated boast that “Bin Laden was dead” and Al Qaeda was “on the run” following the killing of Osama bin Laden.  Still less did they want to reveal that he and his team failed even to recognize what was going in the Middle East as a genuine crisis.

It was all a lie — or the grossest self-deception.

But they got away with it.

President Obama and his team fiddled… while Benghazi burned and they focused on winning the Nov. 6 election.