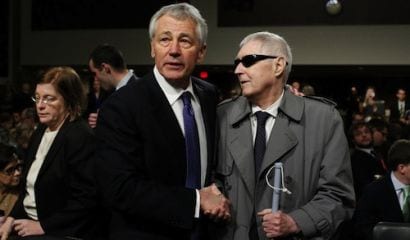 Senate Republicans could do Chuck Hagel a great favor. Instead of lifting their half-hearted filibuster and enabling his confirmation, they could make the filibuster real and thus protect the former Nebraska senator from the budget hell that will greet him at the Pentagon’s door.

On March 1, right around the time Hagel’s confirmation will probably occur, the Pentagon budget will be hit by sequestration under the 2011 Budget Control Act. Sequestration — at four syllables, too long a word to use in politics — is part of the BCA that automatically imposes about $600 billion in spending cuts on the Pentagon over the next ten years, on top of the $487 billion already cut by President Obama.

Both Congress and the White House say that they don’t want sequestration to be imposed, but neither has been able to do more than postpone it. The final postponement expires on February 28. The ax will fall the next day.

Three problems will make sequestration impossible for Hagel to deal with.

First is the unlaudable conduct of his predecessor. Defense Secretary Leon Panetta — a former budget director and presumed expert — had, until last month, utterly refused to plan for the sequestration since the failure of the BCA’s “supercommittee” in November 2011. In February 2012, Panetta said, “As the president has pointed out and I’ve emphasized, we are not paying attention to sequester.”

All Panetta did was to tell Congress how horrible it would be if sequestration were imposed. But he refused — apparently at the president’s direction — to plan how to manage it. It was an irresponsible decision for Panetta to reach. There was no reason — other than politics — for him to refuse to plan for the impact on the services’ ability to perform the missions for which they are responsible. But refuse he did.

Equally irresponsible were the actions of the Joint Chiefs of Staff who didn’t rebel against Panetta’s refusal to plan. By their silence, they approved Panetta’s refusal to plan. In April 2012, Joint Chiefs Chairman Gen. Martin Dempsey said that sequestration would result in a hollow force and require a change in our defense strategy. Only a few weeks ago did Panetta relent and the planning began.

Now, the Joint Chiefs and Hagel will have to deal with the immediate impact of about $55 billion in sudden cuts in Pentagon spending in the remainder of FY2013. Instead of spreading that amount over the whole fiscal year — which began in October — the cuts will have to be imposed in only six months.

To make that happen, Hagel will have to cancel or impose major reductions on major weapon system contracts. But which ones? The troubled F-35 was supposed to provide a universal solution to the needs of the Air Force, Navy, and Marines. But after ten years, the F-35 still hasn’t achieved operational status. The new Air Force tanker is, as I’ve written many times over the past decade, desperately needed to support our entire military, not just the Air Force. And which Navy ships will be cancelled? (The Navy has already delayed the refueling and overhaul of the USS Abraham Lincoln, leaving the ship and its air wing in port indefinitely.)

The problem with canceling or delaying programs is that cuts result in increased unit prices. Terminating contracts results in paying “termination costs” to the contractor, for which the government gets nothing.

The F-35 is now up to more than $120 million per aircraft. If the production rate is cut, that price could double. A Secretary Hagel will end up spending more for fewer aircraft, ships, and land vehicles.

Which leads to the second problem Hagel will face.

It all boils down to the fact that policy takes money to implement. The less money you have, the less you can do.

In the State of the Union address, the president barely mentioned defense. He said he wants to strengthen missile defense and continue supporting the Karzai regime after U.S. troops finally withdraw from Afghanistan next year. Obama’s global strategy, such as it is, calls for the reorientation of our military posture, shifting from the Atlantic theater to the Pacific. He has said we would not permit Iran to have nuclear weapons and would eliminate North Korea’s nuclear weapons. And, among other things, he’s promised a sea-based missile defense system to Poland as a substitute for the ground-based system promised by George Bush.

Sequestration, as Panetta has said, will result in the smallest navy since 1915, the smallest Air Force fleet since the Air Force was created, and vast reductions in the capabilities of the Army and Marines.

In short, Obama’s strategy cannot — as General Dempsey has said — be supported by so small a military. We will, as Dempsey has also said, have to give up certain missions. But which ones? If we abandon Europe entirely — breaking Obama’s promise to Poland, ending our failing NATO alliance — the military will still be unable to protect American interests and allies in the Pacific region.

Our adversaries know this. Last week, Russian jets circled our exposed forces in Guam. China is building new stealthy aircraft, new submarines and surface ships equipped with new ship-killing missiles to deny us the ability to interfere with its ambitions. It is also conducting an aggressive cyberwar against us with espionage and interference with the functioning of essential satellites.

How will Obama and Hagel deal with China’s aggression around Japan’s Senkaku Islands if it flares into war? We don’t have — and cannot afford to build — the ships and aircraft it will take to deal with this crisis, or with North Korea’s threats to target America with nuclear armed missiles. Which leads us to the third problem Hagel will face.

To put it bluntly, Hagel isn’t equipped by intelligence, experience, or expertise to deal simultaneously with the threats we face even with a fully-equipped, trained, and ready military. Hagel was a deer in the headlights in his confirmation hearing. He will be the weakest defense secretary since Clinton appointed former congressman Les Aspin to the Pentagon’s top job.

Aspin will be an unfortunate role model for Hagel. When Aspin was secretary of defense, as I’ve learned from people who were in high Pentagon positions at the time, he would rush in every morning and undo every decision that had been made the day before. Aspin tossed everything up in the air every day. But it was peacetime, and Aspin had a strong military around him that prevented his mismanagement from causing a real disaster.

Hagel will take over in the midst of a war, and on the brink of more and larger conflicts. He won’t make decisions unless Obama dictates them. And the military won’t object. They’ve neutered themselves by not not refusing to go along with what Obama has already done. To his credit, Gen. Dempsey warned Congress last week that the Pentagon can’t give Congress one more dollar in cuts. But he won’t do what is required to make the point.

It’s been seventeen years since a general resigned rather than go along with a decision he believed was wrong. Air Force Chief of Staff Gen. Ron Fogelman quit rather than blame an innocent man for the Khobar Towers bombing. No general or admiral since has had that courage.

With the weakest defense secretary in two decades and a careerist military, Obama will continue our gradual abdication of the role of a superpower. Iran, North Korea, Pakistan, and China — just to name the obvious — will continue their aggression unchecked.

Policy without money to accomplish it is as weak and ineffectual as diplomacy unsupported by military force. Obama’s policies are bankrupt in both regards.

We are entering an era of instability and war that will accelerate a global realignment dominated by our enemies. With Obama and Hagel in charge for the next four years, that realignment will mean that the 21st century will belong to them unless their successors can revive both our economy and our defenses. The longer it takes to begin that revival, the less possible it will be to accomplish.