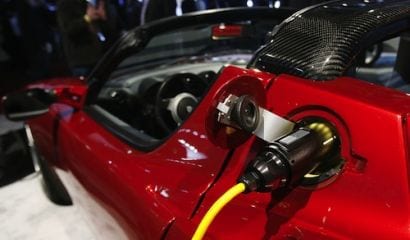 Elon Musk is brave. You’ve got to give him that.

After all, the PayPal billionaire and co-founder of Tesla Motors was ballsy enough to provide one of his six figure electric lemons (produced courtesy of $465 million in taxpayer-extorted “loans” to the company) to a writer for the New York Times. Who proceeded to write about it.

Just not in the way that Elon Musk probably hoped he would.

The NY Times writer — John Broder — decided to fact-check the Tesla’s claimed 265 mile range by driving the thing from Washington, D.C. to Norwich, CT. He barely made it — and that’s with extended pit stops along the way at Tesla-provided electric IVs.

Broder wrote (see here for the full rant) about having to turn off power-sapping accessories such as the heater (in the middle of winter) and cut his speed to 56 MPH (on the NJ Turnpike, where traffic routinely runs 70-plus) in order to avoid running the batteries dry before the car could gimp itself to the next “supercharger” recharging station. When he got there, he “tanked up” the batteries to an indicated 186 mile range, drove another 80 miles and parked the car overnight. The car’s range-meter (the electric car equivalent of a gas gauge) indicated 90 miles remaining, Broder wrote. Sufficient to make it to Norwich — or so he thought.

Next morning — after the car sat in the cold all night — that 90 mile range plummeted to just 26 miles. The car conked out before it got close to Norwich — and had to be flatbedded away.

When Broder’s article appeared, sparks flew over at Tesla’s HQ. Elon Musk went so far as to accuse Broder of lying about the car’s performance. In a Tweet, he wrote: “NY Times article about Tesla range in cold is fake. Vehicle logs tell true story that he didn’t actually charge to the max and took a long detour.”

As a car journalist who has test-driven several electric cars, I’m siding with Broder and the NY Times. Let me first deconstruct Musk’s Tweet:

He claimed that Broder “didn’t actually charge to the max” and that’s like “starting off a drive with a tank that’s not full.” Well, except when you start off with say half a tank in a gas-burning car (the equivalent of an indicated 186 mile range in an electric car), it doesn’t plummet to an eighth of a tank before you actually begin your drive.

One of the biggest functional/engineering obstacles to electric car viability is that batteries lose power in the cold — while gasoline doesn’t. If you leave your car parked in the garage with half a tank, it’ll still have a half-tank tomorrow morning.

An electric car’s range is.

The colder it is, the shorter your range will be. Not just because batteries are less efficient in the cold, but also because in the cold, you’ll be using electricity for other things besides moving the car. Things like the heater — which in an electric car is powered by electricity — and if it’s dark out, you’ll be burning headlights longer — which also means burning juice. Which you have a finite amount of.

There is only so much juice — and once it’s gone, you are stuck. As happened to Broder.

Hybrid gas-electric cars like the Toyota Prius and the Chevy Volt end-run this problem by carrying around portable generators. These are called internal combustion engines. Just like in regular cars, only the gas engines in hybrids are smaller — and the electric batteries bigger. But the principle is the same. The gas engine makes electricity (via the alternator, in a non-hybrid car) which replenishes the battery and keeps it topped off. If you take the internal combustion engine out of the equation, you’ve got no back-up. When the juice ebbs, you’re stuck.

Because unlike a standard car (or a hybrid car) you can’t just hoof it or hitch a ride to the next gas station, get a couple gallons in a can and be on your way. If you run dry in an electric car, you’ve got to find a charging station — and unlike gas stations, these are not found just down the road.

Tesla — the company — set up what it calls “supercharger” charging stations along Broder’s drive route. But even these mean “fill-ups” that take much longer than the five minutes it takes to fill up a gas car’s tank. It took Broder an hour to put 186 miles of range back in the Tesla’s batteries. And remember — that indicated 186 miles turned out to be 106 miles (according to the car’s computer). He would have needed to recharge for another hour to make it to Norwich. That’s two hours of down time — vs. five minutes to fill up a standard car’s tank.

And that’s using Tesla’s special charging rigs — which use four times the voltage (480 volts) of a standard 110v household outlet. I recently test drove the plug-in version of the Toyota Prius hybrid. Using 110V current, it took 3-4 hours to bring the batteries back up to full charge. But at least with the Prius, there’s a gas engine on board to keep you going when the battery begins to wilt. That means you can keep on driving without hour-long pit stops every 100 miles or so. You might be burning gas — but you won’t be wasting time. You can always buy more gas. But time lost is gone forever. And most of us need to get where we’re going.

Broder found out about the actual range.

So did an Autoweek magazine test driver — who, like Broder, was left stranded by his electric Edsel.

When potential buyers find out, I suspect it’s going to be lights out for Tesla.

It’s just too bad that it’s not Musk’s money that got flushed down the toilet.